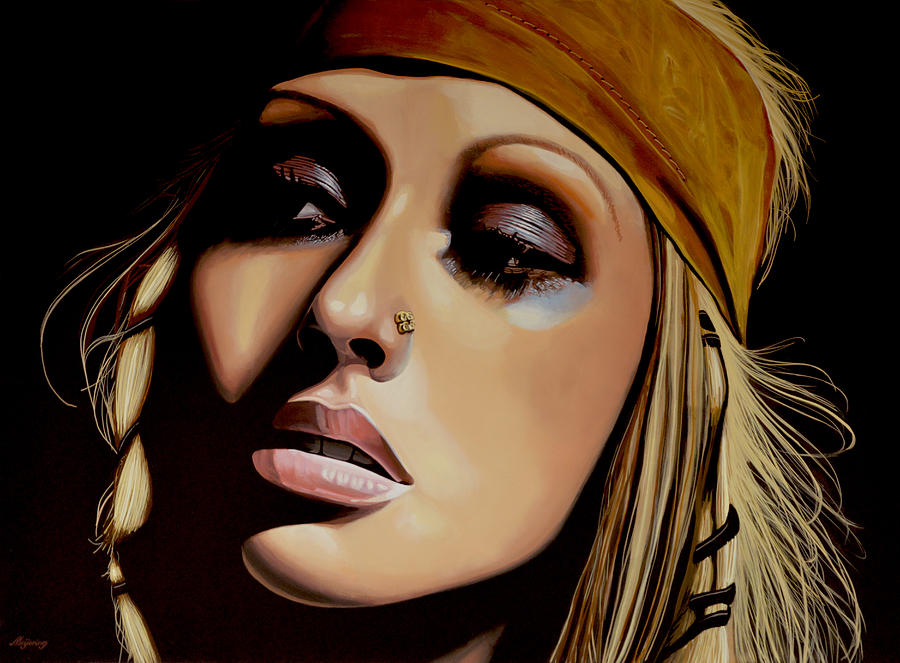 Christina Aguilera Painting is a painting by Paul Meijering which was uploaded on March 21st, 2013.

Christina Maria Aguilera (born December 18, 1980) is an American singer, songwriter, and record producer. She first became known to the public as a child upon appearing on television series, most notably of which is The Mickey Mouse Club. Aguilera's first charting song was Walt Disney Pictures' 1998 film Mulan's theme song "Reflection", which appeared on the US Adult Contemporary and subsequently helped Aguilera gain a contract with RCA Records. She rose to fame with her 1999 teen pop self-titled debut album, which peaked atop the US Billboard 200 and produced three US Billboard Hot 100 number-one singles: "Genie in a Bottle", "What a Girl Wants", and "Come On Over Baby (All I Want Is You)". Her follow-up Spanish album Mi Reflejo and holiday-theme album My Kind of Christmas were released in 2000 and entered the top thirty of the Billboard 200.

Despite the successful musical debut, Aguilera was displeased with the lack of input in her music and lyrics. Her 2002 studio album Stripped ventured into various genres including hip hop, Latin, and rock, which met with lukewarm critical reception. The album's lead single "Dirrty", whose music video sparked criticism owing to its depiction of sexual fetishes, eliminated Aguilera's previous image as a teen pop singer, while the second single "Beautiful" was praised for its music video's positive portrayal of gay people. Aguilera's fifth studio album Back to Basics, released in 2006, was inspired by blues, soul, and jazz music of the 1920s-40s. The album was her second Billboard 200 number one and her most critically positive album. Her 2010 electronic-inspired album Bionic and 2012 pop album Lotus struggled to match the sales of her previous albums, which was considered a decline in the singer's career. However, she experienced rehabilitated success as a featured artist on the top-ten singles "Moves like Jagger", "Feel This Moment", and "Say Something". Apart from music, Aguilera also ventured into acting upon playing the lead role in Burlesque (2010). She also served as a coach on US television series The Voice, having appeared on six of its ten seasons since 2011.

Aguilera has been recognized as a pop icon and earned the title "Princess of Pop" in her early years.

The lighting is so dramatic...this is a beautifully done painting, Paul. vote/like

Paul, What amazing talent you have! Liked, Jerome

You have been Featured in ‘Everything In Moderation, Including Moderation’ for your work of excellence in your medium! BRAVO TO YOU!!! Congratulations Paul!

Thank you so much, Sydne, for all your support, compliments and the feature in your amazing group!!;-))

Thank you so much, Robyn, for all your support, compliments and the feature in your wonderful group!!;-))

Thank you so much, Dani, for the feature in your awesome group and your support!!;-)

Splendid! Featured on Up Close and Personal.

Thank you so much, Sophie, for the feature and compliments!!;-))

Very nice! Welcome to the featured section of the FAA Portraits.

Thank you so much, Scott, for the feature and compliments!!;-))

Nicely done, your image is listed in the "Created by my Hands" image gallery.

Thank you so much, David, for the feature and compliments!!;-))

Thank you so much, Rosemary!;-)

Thank you so much, Tyler, for your support!;-))

Beautifully done portrait, Paul! Congrats on the features! (like/ fav)

Only image chosen today for feature on She Has Style group out of several artist's works.

Thank you so much, Donika!

Thanks so much, PJ!