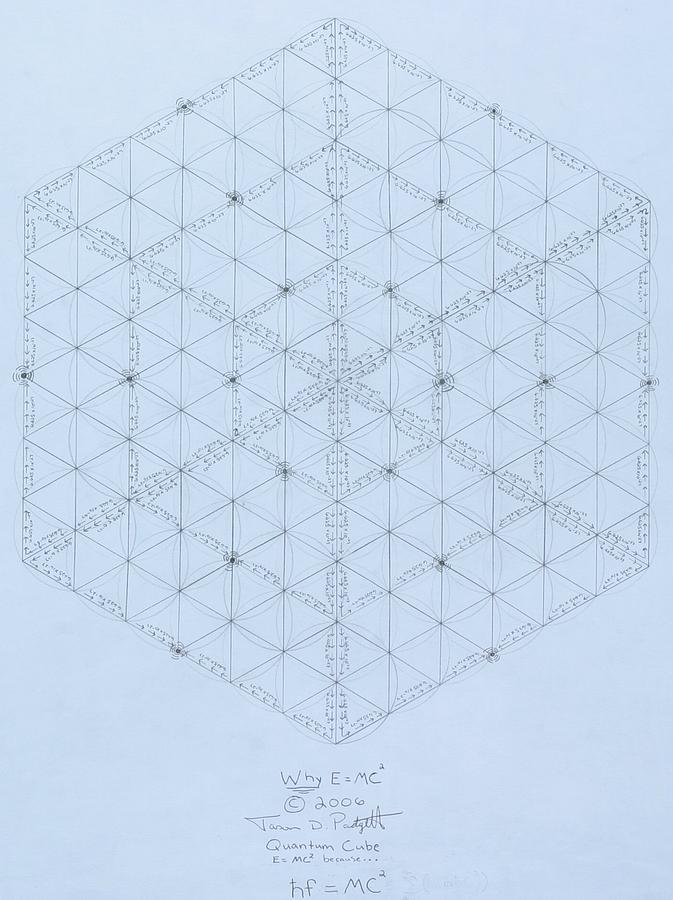 Why Energy Equals Mass Times the Speed of Light Squared is a drawing by Jason Padgett which was uploaded on August 26th, 2008.

Why Energy Equals Mass Times the Speed of Light Squared

This diagram shows in a simple and elegant way where energy itself may (which also means matter) come from. This shape has been drawn by artists,... more

Why Energy Equals Mass Times the Speed of Light Squared

This diagram shows in a simple and elegant way where energy itself may (which also means matter) come from. This shape has been drawn by artists, mathematicans, physicists and others for thousands of years. Some call it sacred geometry, some call it by scientific terms such as grid or lattice. I call it a Planck lattice or .....the structure of space time. This explanation is a little long but the reward is immense if you are interested in knowing where energy (which means matter, which also means you) comes from. Each side to every small equilateral triangle in this diagram represents some thing called a Planck constant or more descriptively a Planck length. A Planck length is the smallest piece or slice of space time that can be observed (or exist relative to us). There is no relative measurement smaller than a Planck constant. Since there are no measurements smaller than a Planck constant then you cannot have a distance that is 1 1/2 Planck lengths because the 1/2 is smaller than the Planck length. This means that when measuring (or observing) slices of space time you can only measure one or whole multiples of one Planck lengths. In other words, any point of space time that exists must be EXACTLY one or whole multiples of one Planck length from all other points. When you try to 'draw' space time you must make all points one or whole mulitples of one Planck length away from all others. This requirement automatically creates the grid like structure of space time. This diagram is the ONLY way that space time can be drawn with whole multiples of Planck lengths. Because there are no fractions the shape that arises is a two dimensional hexagon interacting with other hexagons creating larger and larger hexagons. If you view it three dimensionally you will see that it automatically creates three dimensional cubes that create larger and larger cubes. This is 'why', as Einstein stated, that space time has a grid like structure. This is where that grid structure arises from. Now that we have defined the structure of space time lets look closely at what happens when we 'vibrate' this grid (or Planck lattice) structure. There is something called the Uncertainty principle in physics. What it states is that you cannot locate a particle position and velocity BOTH with perfect precision. What this means is that when you are looking at (or observing) a point of space time it 'vibrates' because you cannot define its position and velocity perfectly. Because of the Uncertainty principle each piece or slice of space time vibrates at the speed of light. This means that every Planck constant (each tiny piece of space time) vibrates at the speed of light. Each Planck constant, in addition to being the same length, has the same (and specific) mass. Now lets see what happens when the structure of space time (or a Planck lattice) vibrates at the speed of light. Look at the center of the diagram and picture it vibrating at the speed of light. Notice that when it vibrates, it vibrates the points connected to it. Also see that the vibrations continue outward and collide with each other head on (at the speed of light) at specific points. (I've drawn little collision points where they collide). This is where the speed of light squared comes from in Einsteins E=MC^2 (in words, energy equals mass times the speed of light squared). Now that we have half of his equation all we need to find is mass. To find the mass all you do is add up the number of Placnk constants (since each have a specific mass) to give you the total amount of mass in a vibrational sequence. So what you have is energy equals the total Planck constants in the vibration (this equals mass) times the speed of light (how fast the Planck vibrate), squared (as the Planck constants collide head on at the speed of light). In reality there are trillions and trillions of collisions occuring at different frequencies which gives rise to all colors, EM waves, gravity, etc. In the diagram I've just drawn collisions at the most common points so it is easier to picture. The equation at the bottom of the diagram describes energy in pure equation form. Maxwell Planck (who discovered and named the Planck constant), won the noble prize in physics and discovered that Energy=hf. In words, energy equals the Planck constant (the 'h' symbol) times frequency (the 'f' symbol). Einstein discovered that Energy=mc^2. In words, energy equals mass times the speed of light squared. Since Energy=hf and Energy=mc^2, then they both equal energy and therefore equal each other. Or, hf=mc^2, in words, the Planck constant times frequency equals mass times the speed of light squared. Combining these two equations and seeing the shape of space time vibrating at the speed of light is the key to understanding where energy may come from. On a final note, notice how the structure of space time is a fractal. (A shape that when taken apart into pieces is the same as the whole). Scientists have know for several years that every shape that exists is a fractal. But they didn't know why. This diagram shows why. Since the structure of space time literally creates all shapes, and space time is itself a fractal, and by using De Moivre's theorem and this grid structure it can be proven that all shapes repeat at all possible levels.

Every shape that exists is a fractal. Scientists already know that all shapes come from fractals. This diagram may show why, which is the question that so many of us want to know.

Relativity is elegant, beautiful, empowering and humbling all at the same time.

Congratulations on your Sale!

I'm not sure what you're doing, but it sure does intrigue me?

Congratulation on sale announcement and amazing.

congrats on the sale, jason. i like the drawing and the title, but i'm having a little trouble with the explanation why :) really nice play on perspective of the cube!

Nobody else see the metatron's cube?