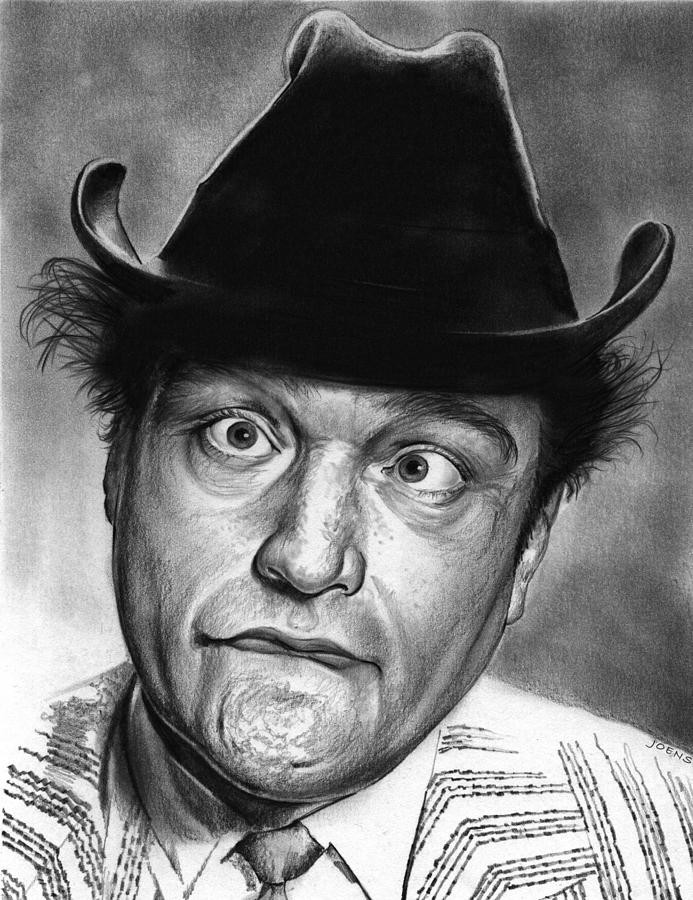 Red Skelton is a drawing by Greg Joens which was uploaded on April 27th, 2015.

Richard Bernard "Red" Skelton (July 18, 1913 – September 17, 1997) was an American entertainer best known for his national radio and television acts between 1937 and 1971 and as host of the television program The Red Skelton Show. Skelton, who has stars on the Hollywood Walk of Fame for his work in radio and television, also appeared in vaudeville, films, nightclubs, and casinos, all while he pursued an entirely separate career as an artist.

Skelton began developing his comedic and pantomime skills from the age of 10, when he became part of a traveling medicine show. He then spent time on a showboat, worked the burlesque circuit, then entered into vaudeville in 1934. The Doughnut Dunkers, a pantomime sketch of how different people ate doughnuts written by Skelton and his wife launched a career for him in vaudeville, in radio and in films. Skelton's radio career began in 1937 with a guest appearance on The Fleischmann's Yeast Hour which led to his becoming the host of Avalon Time in 1938. He became the host of The Raleigh Cigarettes Program in 1941 where many of his comedy characters were created and had a regularly scheduled radio program until 1957. Skelton made his film debut in 1938 alongside Ginger Rogers and Douglas Fairbanks, Jr. in Alfred Santell's Having Wonderful Time, and he went on to appear in numerous musical and comedy films throughout the 1940s and early 1950s, such as I Dood It (1943), Ziegfeld Follies (1946) and The Clown (1953).

He was most eager to work in television, even when the medium was in its infancy. The Red Skelton Show made its television premiere on September 30, 1951, on NBC. By 1954, Skelton's program moved to CBS, where it was expanded to one hour and renamed The Red Skelton Hour in 1962. Despite high ratings, his television show was canceled by CBS in 1970 as the network believed more youth-oriented programs were needed to attract younger viewers and their spending power. Skelton moved his program to NBC, where he completed his last year with a regularly scheduled television show in 1971. After he no longer had a television program, Skelton's time was spent making up to 125 personal appearances a year and on his artwork.

Skelton's artwork of clowns remained a hobby until 1964, when his wife, Georgia, convinced him to have a showing of his work at the Sands Hotel in Las Vegas while he was performing there. Sales of his originals were successful and Skelton also sold prints and lithographs of them, earning $2.5 million yearly on lithograph sales. At the time of his death, his art dealer believed that Skelton had earned more money through his paintings than from his television work.

Skelton believed his life's work was to make people laugh and wanted to be known as a clown, because he defined it as being able to do everything. He had a 70-year career as a performer and entertained three generations of Americans during this time. Many of Skelton's personal and professional effects, including prints of his artwork, were donated to Vincennes University by his widow, where they are part of the Red Skelton Museum of American Comedy.