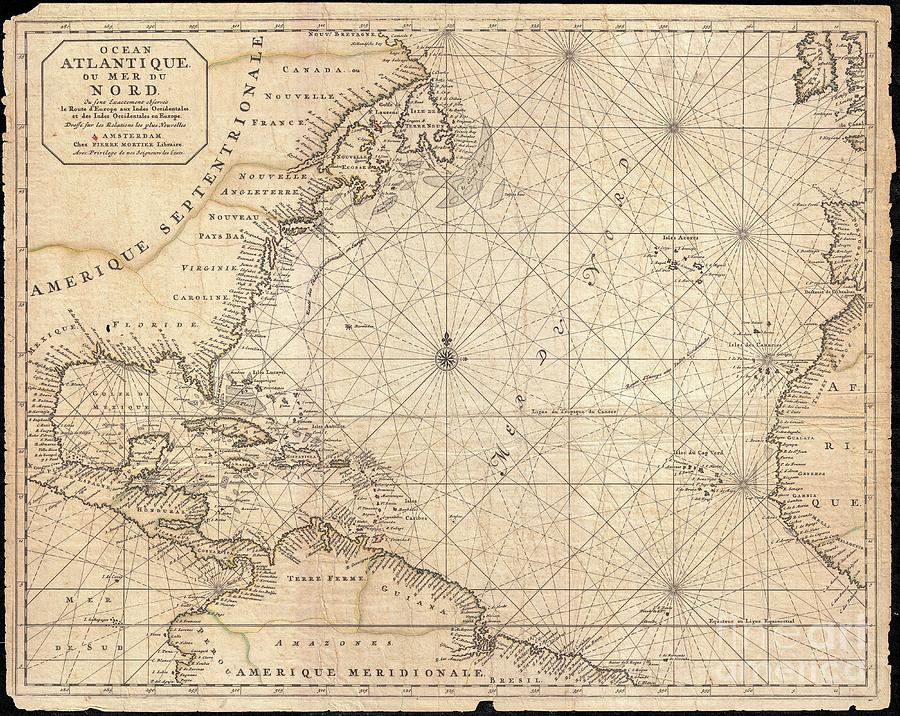 1683 Mortier Map of North America the West Indies and the Atlantic Ocean is a photograph by Paul Fearn which was uploaded on July 12th, 2013.

This is a rare and remarkable 1693 nautical chart of the Atlantic Ocean by Pierre Mortier. Covers the North Atlantic from rough 5 degree south... more

This is a rare and remarkable 1693 nautical chart of the Atlantic Ocean by Pierre Mortier. Covers the North Atlantic from rough 5 degree south latitude to roughly 56 degrees north latitude. Includes much of North America, all of the West Indies and Caribbean, Central America, the northern parts of South America, Western Africa, Ireland, and parts of Western Spain. As a whole Mortier's map presents a moderately accurate picture of the Americas. The coast lines, particularly in North America are a unnaturally craggy. Florida takes on an inverted cone aspect. The barrier islands and capes off the coast of Virginia and Carolina are noted, but inaccurately represented. The Chesapeake Bay is slightly diminished in size. The entrance to the Mississippi River is either not apparent or confused with the conjectural Rio de Spirito Sancto. This river, most likely associated with early entradas into Mobile Bay, was confused with the Mississippi on numerous older maps. Politically, Mortier recognizes the French claims to Canada, the British claims to the region between New York and the St. Lawrence, Dutch claims to New Jersey, Pennsylvania, and Baltimore, and Spanish Claims to Florida. Identifies New York, Baltimore, Philadelphia, Staten Island, Long Island, Cape Hatteras, Cape Look (Cape Lookout), Port Royal, St Augustine and Havana, among others. Like most maritime charts this map has very little inland detail but a high level of nautical detail. Identifies thousands of coastal destinations throughout as well as offshore shoals, reefs, and other undersea dangers. Mortier additionally maps various shipping routes between Europe and the Americas. This chart was composted by Pierre Mortier for issue in his extraordinary 1693 nautical atlas, Le Neptune François . As a side note, this map, with its moderate age toning, distinctive rhumb lines, and tattered margins, looks exactly like the quintessential pirate's map - which given its issue at the height of the Great Age of Caribbean Piracy, it may well have been.

Congratulations on your new $ale

Congratulations on you sale !!!