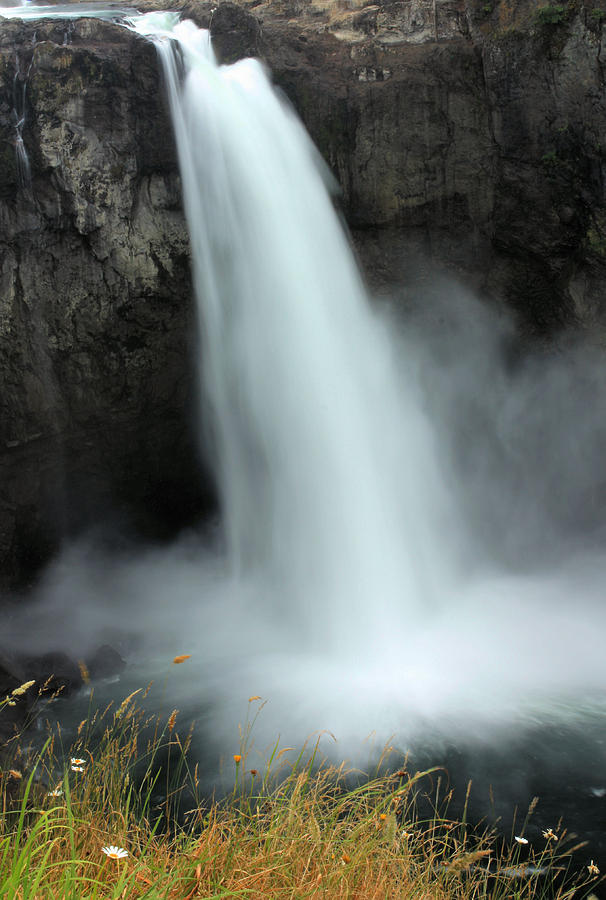 Snoqualmie Falls is a photograph by Kristin Elmquist which was uploaded on August 25th, 2012.

Snoqualmie Falls is a 268 ft waterfall on the Snoqualmie River between Snoqualmie and Fall City, Washington, USA. It is one of Washington's most... more

Snoqualmie Falls is a 268 ft waterfall on the Snoqualmie River between Snoqualmie and Fall City, Washington, USA. It is one of Washington's most popular scenic attractions, but is perhaps best known internationally for its appearance in the cult television series Twin Peaks. More than 1.5 million visitors come to the Falls every year, where there is a two acre park, and observation deck.

Most of the river is diverted into the power plants, but at times the river is high enough to flow across the entire precipice, which creates an almost blinding spray. High water occurs following a period of heavy rains or snow followed by warm rainy weather. This can occur during the rainy season which lasts from November through March. During high water, the falls take on a curtain form.

For the Snoqualmie People, who have lived for centuries in the Snoqualmie Valley in western Washington, Snoqualmie Falls is central to their culture, beliefs, and spirituality. A traditional burial site, to the Snoqualmie, the falls are "the place where First Woman and First Man were created by Moon the Transformer" and "where prayers were carried up to the Creator by great mists that rise from the powerful flow." The mists rising from the base of the waterfall are said to serve to connect Heaven and Earth.

Thanks, Michael, for featuring this image in the Waterfalls Group. I appreciate it. :)

Thanks, Randy, for featuring this image in the Wisconsin Flowers and Scenery Group. :)

Thanks, Randy, Lingfai, Xueling, Oiyee, Kim, Matthias, Madeline, Kay and Ann. I appreciate all of your wonderful comments and support. I'm so glad that this brings you wonderful memories, Randy. Kim - go ahead and paint it, but if you do, I hope you will put more daisies in the foreground than I was able to capture. :)

Congrats on the sale of this gorgeous image, Kristen.

Great capture, congrats on your sale!

Congrats. I love it so much I want to paint it!

Love this waterfall photo, Kristin. Congrats on your sale.

I especially love all forms of waterfalls, Kristin, but this one holds special memories for me, as when I used to live in Tacoma, Washington, I got to see this infamous falls of glory, along with the World's Fair, in Seattle, when the Space Needle was first entered, and the World's Fair in Spokane, Washington when I was first married to my wonderful wife, of 44 years, and Point Defiance, and the Daffodil festival, etc. So, this falls brings back lots of memories, and your capture and angle of shot, and presentation are superlative. Thanks for the memories, Kristin! fave and vote

Nice capture of the Falls