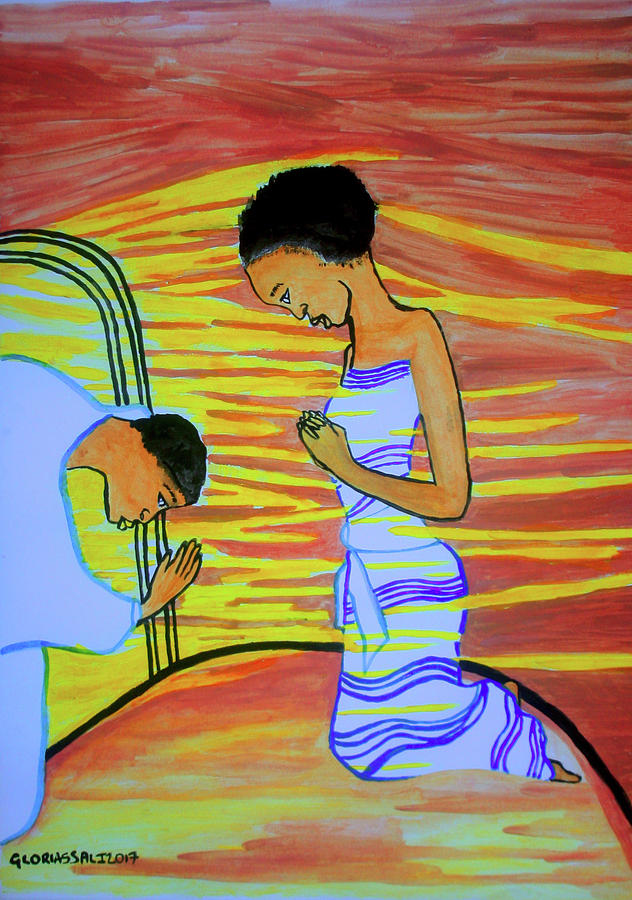 The Annunciation is a painting by Gloria Ssali which was uploaded on May 28th, 2017.

Mary (Hebrew: מרים, Miriam; Aramaic: Maryām; Arabic:مريم, Maryam), commonly referred to as "Saint Mary", "Mother Mary", the "Virgin Mary", the "Blessed Virgin Mary", or "Mary, Mother of God", was a Jewish woman of Nazareth in Galilee.
The canonical gospels of Matthew and Luke describe Mary as a virgin (Greek παρθένος, parth�s).[5] Traditionally, Christians believe that she conceived her son miraculously by the agency of the Holy Spirit. This took place when she was already betrothed to Saint Joseph and was awaiting the concluding rite of marriage, the formal home-taking ceremony.[6] She married Joseph and accompanied him to Bethlehem, where Jesus was born.[3] In keeping with Jewish custom, the betrothal would have taken place when she was around 12, and the birth of Jesus about a year later.[7]
The New Testament begins its account of Mary's life with the Annunciation, when the archangel Gabriel appeared to her and announced her divine selection to be mother of Jesus. Church tradition and early non-biblical writings state that her parents were an elderly couple, Saint Joachim and Saint Anne. The Bible records Mary's role in key events of the life of Jesus from his conception to his Ascension. Apocryphal writings tell of her subsequent death and bodily assumption into heaven.
Christians of the Catholic Church, the Eastern Orthodox Church, Oriental Orthodox Church, Anglican Communion, and Lutheran churches believe that Mary, as mother of Jesus, is the Mother of God (Μήτηρ Θεοῦ) and the Theotokos, literally Birthgiver of God. Mary has been venerated in Christianity since the Apostolic Age. Throughout the ages she has been a favorite subject in Christian art, music, and literature.
There is significant diversity in the Marian beliefs and devotional practices of major Christian traditions. The Catholic Church has a number of Marian dogmas, such as the Immaculate Conception and the Assumption. Catholics refer to her as Our Lady and venerate her as the Queen of Heaven and Mother of the Church

How enchanting and gorgeous! Love this marvelous painting so very much! fav

Gloria, you capture so well these tender and emotional moments. Your unique and innovative line and color make these works special in their deep meanings. F/L

thank you so much Tessa

What a beautiful painting and colors Gloria! l/f/t/p