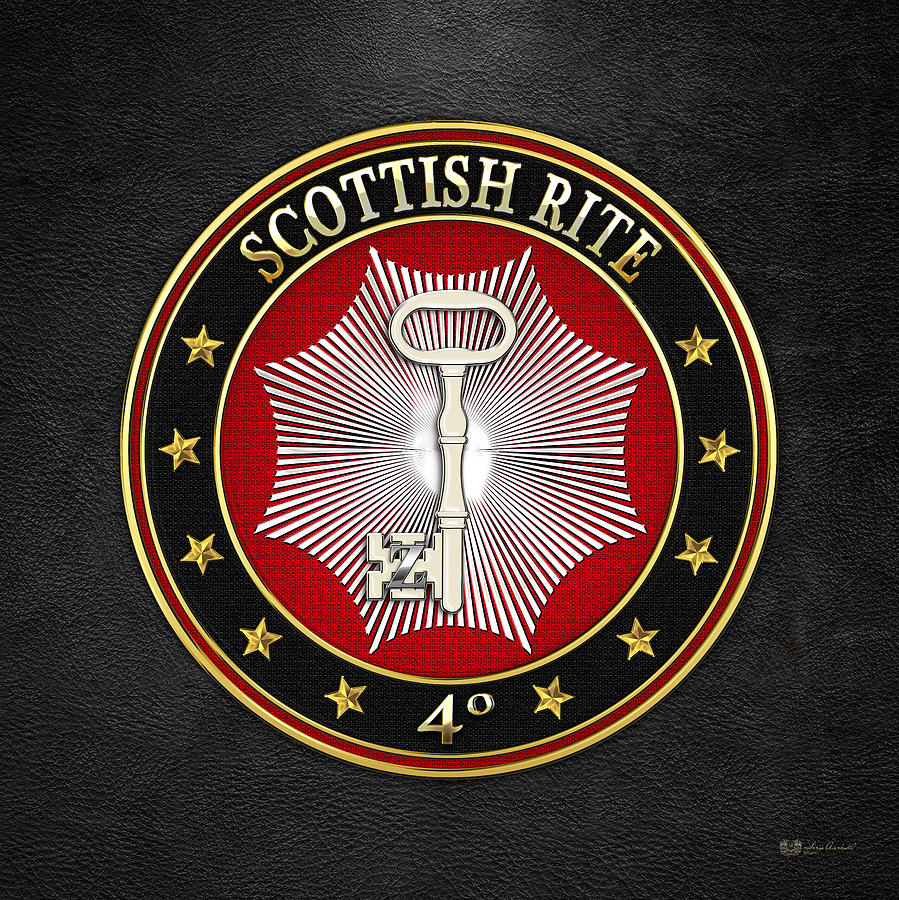 4th Degree - Secret Master Or Master Traveler Jewel On Black Leather is a piece of digital artwork by Serge Averbukh which was uploaded on February 14th, 2014.

Here you will find pieces featuring 4th Degree - Secret Master or Master Traveler Jewel on Black Leather.
Freemasonry is a fraternal organization that arose from obscure origins in the late 16th to early 17th century. Freemasonry now exists in various forms all over the world, with a membership estimated at around six million. The fraternity is administratively organized into independent Grand Lodges or sometimes Orients, each of which governs its own jurisdiction, which consists of subordinate (or constituent) Lodges. There are also appending bodies, which are organizations related to the main branch of Freemasonry, but with their own independent administration.
The Ancient and Accepted Scottish Rite of Freemasonry (the Northern Masonic Jurisdiction in the United States often omits the and, while the English Constitution in the United Kingdom omits the Scottish), commonly known as simply the Scottish Rite, is one of several Rites of Freemasonry. A Rite is a progressive series of degrees conferred by various Masonic organizations or bodies, each of which operates under the control of its own central authority. In the Scottish Rite the central authority is called a Supreme Council.
The Scottish Rite is one of the appendant bodies of Freemasonry that a Master Mason may join for further exposure to the principles of Freemasonry. In England and some other countries, while the Scottish Rite is not accorded official recognition by the Grand Lodge, there is no prohibition against a Freemason electing to join it. In the United States, however, the Scottish Rite is officially recognized by Grand Lodges as an extension of the degrees of Freemasonry. The Scottish Rite builds upon the ethical teachings and philosophy offered in the craft lodge, or Blue Lodge, through dramatic presentation of the individual degrees.
The 4th Degree: Secret Master (Southern Jurisdiction and Canada) or Master Traveler (Northern Jurisdiction), deals with the concepts of duty. To a Mason, duty embraces an obligation to take an interest in the problems of his environment, learn the social problems of his community, country and even the World; and try to contribute solutions to these problems. The lessons of the 4� are secrecy, obedience, and fidelity. One�s first steps into our sanctuary are duty, reflection and study. They teach us to honor those relationships to God, family, country, Masonry. The apron is white and black, with a letter "Z" and all-seeing eye. The jewel is a small ivory key with a black 'Z' upon the wards. It is worn suspended from a broad white ribbon edged in black. The jewel of the Master is a small equilateral triangle of gold emblazoned with the Greek letters: Iota, Alpha and Omega at the apexes. Pike tells us, "The Name of Deity, in many nations, consisted of three letters: among the Greeks, [Iota, Alpha, Omega]; ..." On its reverse are the Samaritan characters Yod, He, and Vau; these three letters, with He duplicated are used to form the Ineffable Name of Deity, called the Tetragammaton, usually pronounced as 'Yahweh'. Pike, though he uses the Hebrew forms, also explains their significance as representing three of the ten Sephiroth, or emanations from Deity, of the Kabalah: Gedulah, Geburah, and Tephareth; that is, Mercy, Justice and Beauty.