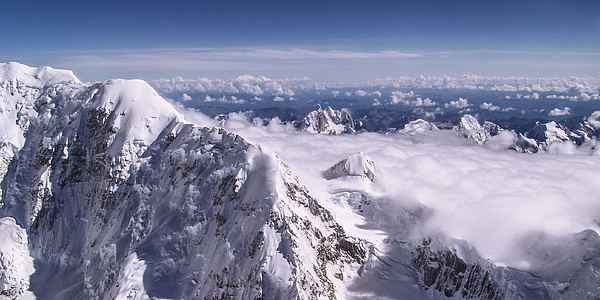 Congrats on your sale, stunning shot!

Been to Denali Natl Park and was lucky enough to view from a distance but this is remarkable for being so close and also for it's clarity! V&F

This is just amazing, Chad!!

Fantastic image, makes me yearn for my old Cessna 140. Come think of it, the service ceiling on that plane wasn't high enough to see this, which makes this photo even more precious.

Ended up being the perfect bday present. Thank you

I have already purchased one yoga mat but I couldn't resist buying this one as well. Really enjoy shopping at fruugo - great products and equally fine service provided.

Brilliant product, really pleased with it and also the service that was provided.

"Above Denali" Denali National Park, Alaska, USA Summer panorama view above Denali Peak (Mount McKinley) in Denali National Park, Alaska. Although captured in the summer, the scene appears to be caught deep in winter. The majestic, snow-covered peaks are nothing short of spectacular. "Mount McKinley, or Denali (Koyukon Athabaskan for 'The High One,' Dghelaayce�e in Ahtna) is the highest mountain peak in... North America, with a summit elevation of 20,320 feet (6,194 m) above sea level. Measured base-to-peak, it is the tallest mountain on land. Measured by topographic prominence, it is the third most prominent peak after Mount Everest and Aconcagua. Located in the Alaska Range in the U.S. state of Alaska, it is the centerpiece of Denali National Park and Preserve" [source Wikipedia]. 0708-0-02982 [2:1]

Alaska & Utah. Fine Art Prints, Workshops, & Presentations. Landscapes, Wildlife, & Portraiture. Nikon and Sony. Likely wandering somewhere. BLM-approved guide to Coyote Buttes, White Pocket, & Grand Staircase-Escalante. "I deeply admire nature and strive to capture the finest scenes possible. I spent all but three years of my life living in the West, providing me incredible opportunities to enhance the self-taught craft." "I have an insatiable desire to wander the wild, seeking solitude and serenity away from the bustle of city life. My deep passion for photography pushes me to extreme levels to capture 'the shot.' Hypothermia, scorpion stings, rattlesnake encounters, and lightning storms are the norm. After each excursion I share...