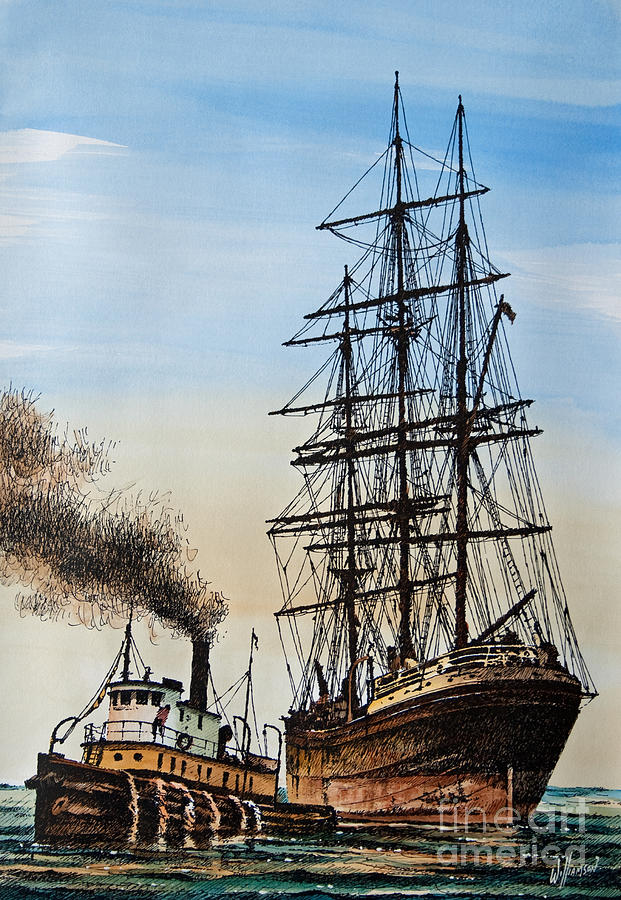 Age of Steam and Sail is a painting by James Williamson which was uploaded on October 3rd, 2011.

Age of Steam and Sail

Age of Steam and Sail... more

Age of Steam and Sail

Age of Steam and Sail
By James R. Williamson
Copyright James Williamson
The Romance of Sail The story of the sailing ship not only documents man�s quest for greater speed at sea. It has also been closely linked with the course of world history and maritime power, of trade and exploration. And yet the mighty sailing ship has always remained an object of grace and beauty-in twentieth-century eyes, perhaps a reminder of the days when life at sea seemed more romantic and adventurous.
The barque or �squarerigger� assisted by a steam tug, illustrated by Pacific Northwest artist James R. Williamson is one of a classic sailing scene. The barque was first developed in the eighteenth century. These were three, four or sometimes five masted ships. The staple three masted type was square-rigged on fore and mainmast, while the mizzen carried a gaff and boomsail; its function was that of the medium sized trader and it was found on both sides of the Atlantic.
The need for at least one more mast came about as the demands made on transport ships increased. Trade was booming and ship owners looked about for ways of stepping up capacity. At the same time, in the 1870s, the narrow clippers were no longer such a good cargo-carrying proposition, for all their speed. One answer was to scale up the barque by giving her three square-rigged masts and a fourth that was a fore-and-aft jigger. After the 1880s barques were also equipped with steel hulls that could embrace larger cargoes and were better able to withstand the stresses of a transatlantic buffeting. Their only drawback was that the iron wire rigging and steel masts and spars were prone to snap; and when they did, they needed specialized equipment to repair them that an ordinary crew could not provide in the course of a voyage. Illustrated here, a wooden hull square-rigger with wooden masts and spars.
A familiar site in Pacific Northwest waters, tall ships such as this carried freight and passengers from and to ports around the world. Sailing in from the Pacific, entering Juan De Fuca Straight and heading to Seattle, Tacoma, Everett, Port Townsend, Gig Harbor or Victoria and Vancouver British Columbia. Quiet at anchorage and majestic in the wind, tall ships symbolize our heritage on the sea.

Fantastic depiction of now and then, with your great talent in pen and ink watercolor, James! Fabulous piece of art work. Congrats on your sale of this masterfully done piece of work!