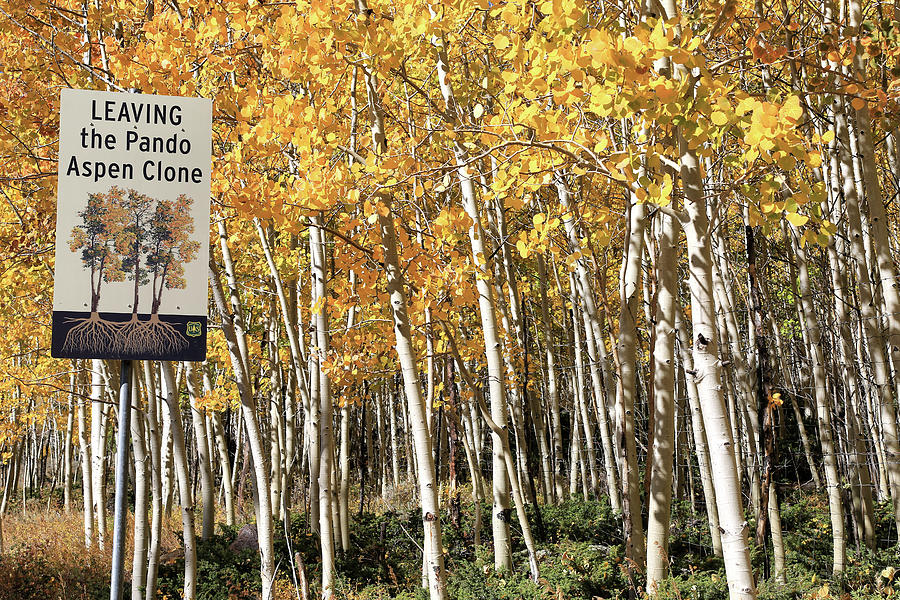 Amazing Pando is a photograph by Donna Kennedy which was uploaded on October 13th, 2019.

The Trembling Giant, or Pando, is an enormous grove of quaking aspens that take the “forest as a single organism” metaphor and literalizes it: the grove really is a single organism. Each of the approximately 47,000 or so trees in the grove is genetically identical and all the trees share a single root system. While many trees spread through flowering and sexual reproduction, quaking aspens usually reproduce asexually, by sprouting new trees from the expansive lateral root of the parent. The individual trees aren’t individuals but stems of a massive single clone, and this clone is truly massive. Pando is a Latin word that translates as “I spread.”

Pando is believed to be the largest, most dense organism ever found at nearly 13 million pounds, the clone spreads over 106 acres. The exact age of the clone and its root system is difficult to calculate, but it is estimated to have started at the end of the last ice age. Some of the trees are over 130 years old. It was first recognized by researchers in the 1970s and more recently proven by geneticists. Its massive size, weight, and prehistoric age have caused worldwide fame. Visitors from many states, as well as other nations have travelled to central Utah to see and experience Pando, especially during the fall season when the leaves turn to yellow and orange. In 2006 the U.S. Postal Service honored the Pando Clone as one of the “40 Wonders of America” with a stamp in its commemoration.
Unfortunately, the future of the giant appears grim. According to Paul Rogers, an ecologist at Utah State University in an October 2010 article in the Deseret News, the Trembling Giant is in danger. While the mature stems of Pando routinely die from the eternal problems of pests and drought, the regenerative roots of the organism that are responsible for Pando’s resilience are under attack as well. Rogers reported a marked absence of juvenile and young stems to replace the older trunks, blaming overgrazing by deer and elk. Without new growth, to replace the old, the Trembling Giant is vulnerable to a catastrophic, sudden withering and shrinking. Rogers confessed, “It’s slipping away very quickly.” A group of researchers have been studying the tree in an effort to save it, and the United States Forest Service is currently experimenting with several 5-acre sections of it in an effort to find a means to save it.
A study published in October 2018 concludes that Pando has not been growing for the past 30–40 years. Human interference was named as the primary cause, with the study specifically citing people allowing cattle and deer populations to thrive, their grazing resulting in fewer saplings and dying trees.

The quaking aspen is named for its leaves, which stir easily in even a gentle breeze and produce a fluttering sound with only the slightest provocation. The effect of this in Pando, multiplied over the tens of thousands of trees and a hundred acres, can be unnerving, giving a real sense of life to the ancient, dying, trembling giant. One of the most popular seasons to visit Pando is fall when the leaves turn bright yellow.

Thank You to the Administrators that Featured this photo in the following Groups:
-Images That Excite You
-Just Perfect
-Your Story of Art
-Signs

Superb portrait and description of this amazing and incredible tree organism, hope they can save it! Beautiful work, Donna! F/L

Thank you John for the visit and Feature! :)