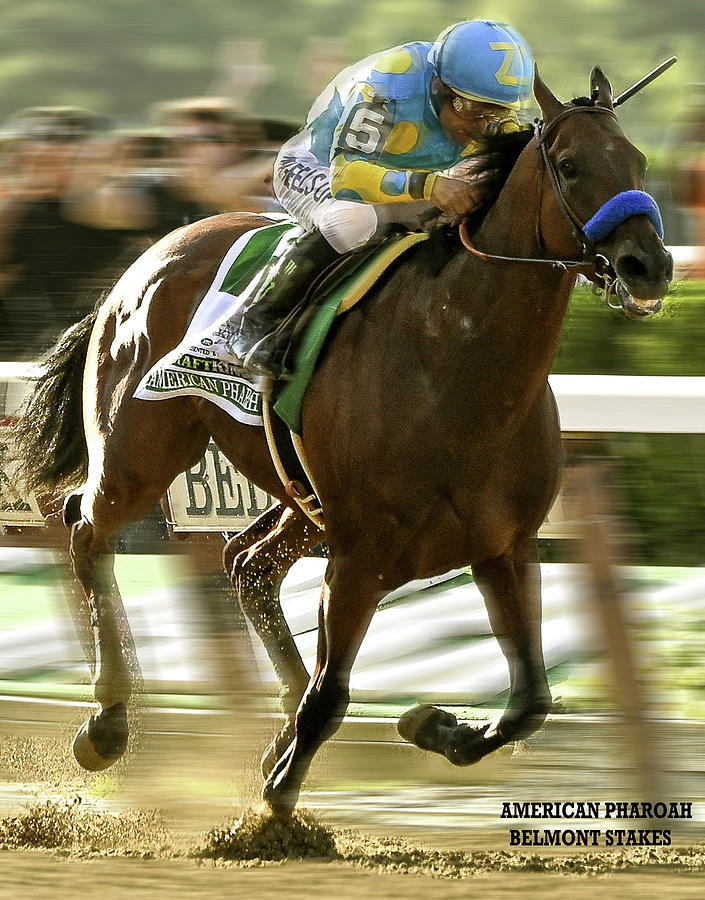 American Pharoah and Victory Espinoza win the 2015 Belmont Stakes is a mixed media by Thomas Pollart which was uploaded on May 28th, 2017.

As American Pharoah came out of the far turn and squared his shoulders to let his rider Victor Espinoza stare down the long withering stretch of Belmont Park, a sense of inevitability surged through this mammoth old grandstand. The fans in a capacity crowd strained on the tips of their toes and let out a roar from deep in their souls. It was going to end, finally — this 37-year search for a great racehorse.

No, a battered old sport was looking for an immortal thoroughbred, one worthy to stand alongside Sir Barton and Assault, War Admiral and Whirlaway, Count Fleet and Citation, a horse able to earn the title of a Triple Crown champion.

There had been only 11 of them in history, and America had elected five presidents, fought three wars and lived through at least three economic downturns since Affirmed had last completed the feat in 1978. In the interim, 12 other very good racehorses had pulled into the starting gate at this grand old racetrack on Long Island with a chance to become the next great horse, only to fall short at the hands of a great rival, as Sunday Silence did to Easy Goer in 1989 or as Real Quiet did in 1998 in a heartbreaking photo finish, or to find the mile-and-a-half distance of the Belmont Stakes just too much, as California Chrome did last year.

Parma, Oh, thank you for your purchases !!!