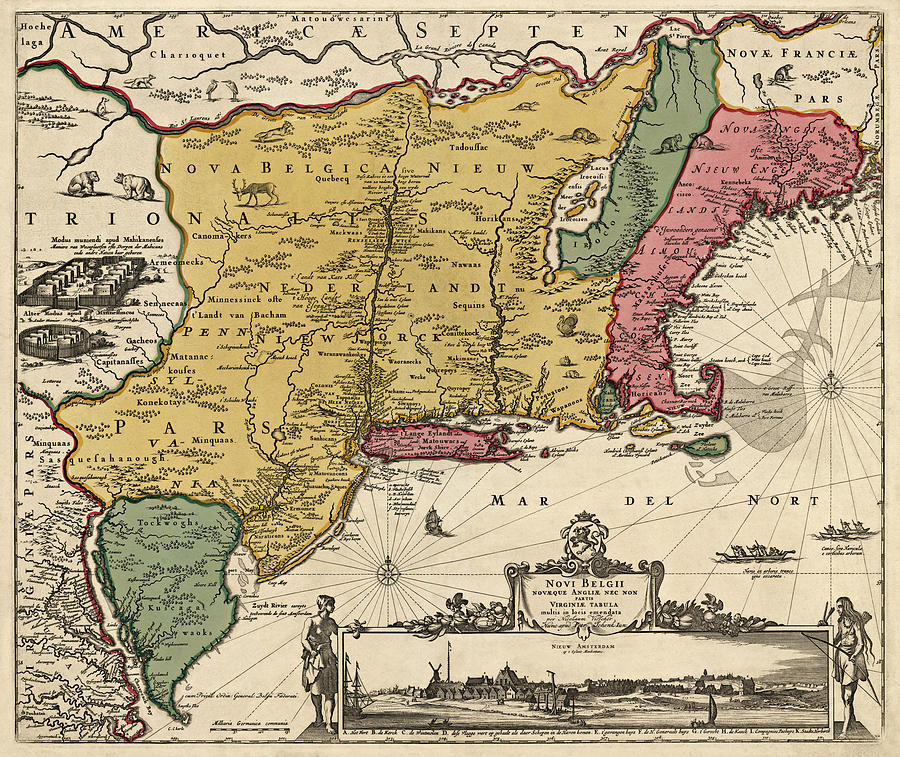 Antique Map Of Colonial America By Nicolaes Visscher - 1685 is a drawing by Blue Monocle which was uploaded on January 11th, 2014.

Visscher's map of the Dutch colony of New Netherlands is one of the best known maps of the region, and shows the eastern coast of the US from the... more

Visscher's map of the Dutch colony of New Netherlands is one of the best known maps of the region, and shows the eastern coast of the US from the Chesapeake Bay north to Maine. The map shows the Dutch colony in yellow, the British colony of New England in pink, and other regions in green whose borders were in a state of change in the late 17th century (present-day Vermont in the north, and Delaware and the eastern shore of Maryland in the south). The map includes many place names in Dutch and English, as well as numerous Native American names, sometimes showing multiple versions of a name for a single place. Included as well are drawings depicting the buildings of Mohican villages and Native Americans rowing in canoes in the Atlantic, and images of turkeys, rabbits, bears, foxes and otters. At the bottom right is the often copied inset view of New Amsterdam (renamed to New York in 1664 by the British) depicting the fort, windmill, and numerous buildings and ships of the Dutch settlement. Original title: Novi Belgii Novćque Anglić nec non Partis Virginić Tabula (New Netherlands, New England, and also a Part of Virginia)

Congratulations on your sale...well done!

I absolutely love maps! This is wonderful! Congratulations on your sale!