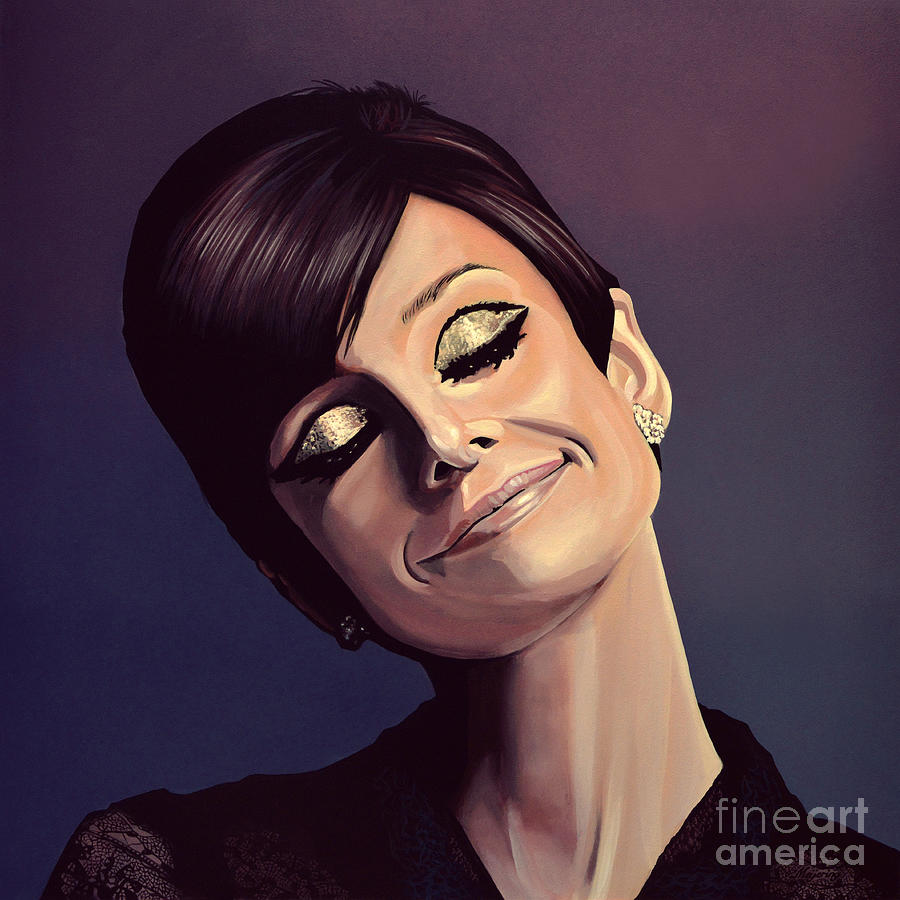 Audrey Hepburn Painting is a painting by Paul Meijering which was uploaded on March 19th, 2012.

Audrey Hepburn - realistic acrylic painting of the British actress, humanitarian and film and fashion icon, most active during Hollywood's Golden Age; Audrey Hepburn, painted by the Dutch fine artist Paul Meijering - the Original painting is 90 x 90 cm and for sale

Audrey Hepburn (born Audrey Kathleen Ruston; 4 May 1929 - 20 January 1993) was a British actress and humanitarian. Recognised as a film and fashion icon, Hepburn was active during Hollywood's Golden Age. She was ranked by the American Film Institute as the third greatest female screen legend in Golden Age Hollywood and was inducted into the International Best Dressed List Hall of Fame. Born in Ixelles, a district of Brussels, Hepburn spent her childhood between Belgium, England, and the Netherlands, including German-occupied Arnhem during the Second World War where she worked as a courier for the Dutch resistance and assisted with fundraising. In Amsterdam, she studied ballet with Sonia Gaskell before moving to London in 1948 to continue her ballet training with Marie Rambert and perform as a chorus girl in West End musical theatre productions. She spoke several languages, including English, French, Dutch, Italian, Spanish, and German.

Following minor appearances in several films, Hepburn starred in the 1951 Broadway play Gigi after being spotted by French novelist Colette. Hepburn shot to stardom for playing the lead role in Roman Holiday (1953), for which she was the first actress to win an Academy Award, a Golden Globe and a BAFTA Award for a single performance. The same year, she won a Tony Award for Best Lead Actress in a Play for her performance in Ondine. Hepburn went on to star in a number of successful films, such as Sabrina (1954), The Nun's Story (1959), Breakfast at Tiffany's (1961), Charade (1963), My Fair Lady (1964) and Wait Until Dark (1967), for which she received Academy Award, Golden Globe and BAFTA nominations. Hepburn won a record three BAFTA Awards for Best British Actress in a Leading Role. In recognition of her film career, she was awarded the Lifetime Achievement Award from BAFTA, Golden Globe Cecil B. DeMille Award, the Screen Actors Guild Life Achievement Award, and the Special Tony Award. Hepburn remains one of the few people who have won Academy, Emmy, Grammy, and Tony Awards.

This is just so beautiful Paul

you do amazing work Paul!!!

Congrats! Your image has been featured on The Art Shoppe Cafe group homepage! Thank you for sharing your beautiful work with us! F/L 12.16.15

In love with this! I remember her fantastic dress and glossy eye shadows ..

I just love this piece! ♥

Another excellent work! Congrats on your sale Paul!

Thank you very much again, Pristine!!;-)

Great work as always Paul! Congrats on your sale!

Thank you so much, Jaqueline, for your kind words and congrats!!!;-)

Featured in The Creators Guild, another masterpiece by an appreciated member.

Thank you so much, Ronda, for the feature and compliments!;-))