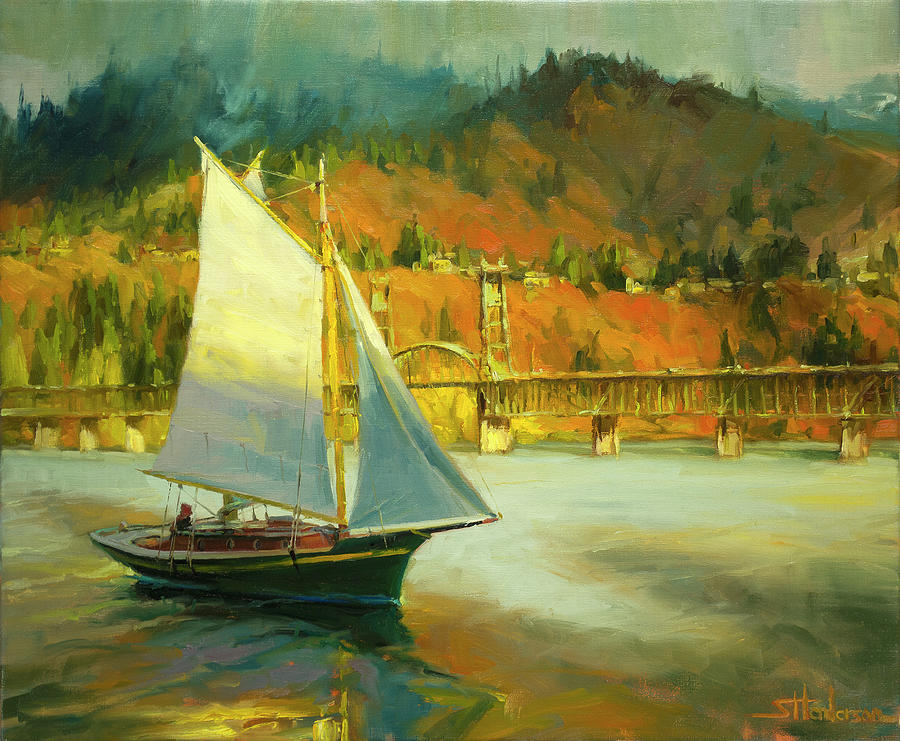 Autumn Sail is a painting by Steve Henderson which was uploaded on March 16th, 2017.

Despite the overcast sky, promising an evening storm, a sailboat calmly negotiates the river's path.... more

Despite the overcast sky, promising an evening storm, a sailboat calmly negotiates the river's path.

Set within the scene Columbia River Gorge between the states of Washington and Oregon, in the U.S. Pacific Northwest, Autumn Sail invites the viewer onto a gently wending day, sailing one’s way through the slow moving waters of the river.

From time to time, but not as often as you would think, one passes by towns on the banks of either side of the river – there is The Dalles and Hood River, on Oregon’s side, and Wishram – a small, former railroad town – in Washington. As one approaches closer to Portland, OR and Vancouver, WA – side by side and separated by bridges – one sees more and more people playing on the river – fishing, boating, windsurfing, kite boarding, and sailing.

And there are the barges and the steam boats, the latter a nostalgic nod to riverboating on the waters, a touch of the Mississippi culture in the land to the west.

The Columbia River is a busy place, because of all this activity, but because it is so broad and wide and big, all the activity does not make a dent in what the river is: a force of water and nature that was here long before Lewis and Clark “discovered” it, and long before the Corps of Engineers dammed it into the shape that it is today. At one time, many Native Americans lived along its banks and lived from its bounty. No doubt they stood at its banks, staring out into the water, and simply listened to its sound and respected its size and force.

Autumn Sail, the artwork, is a reminder to us to look out into these waters as well, to appreciate the silence, to take time too look at the beauty of the river and the Gorge through which it flows, and to simply be away from the incessant demands of modern life.

The light is absolutely stunning! Voted for your entry in the No Place Like Home Autumn 2022 Logo contest.