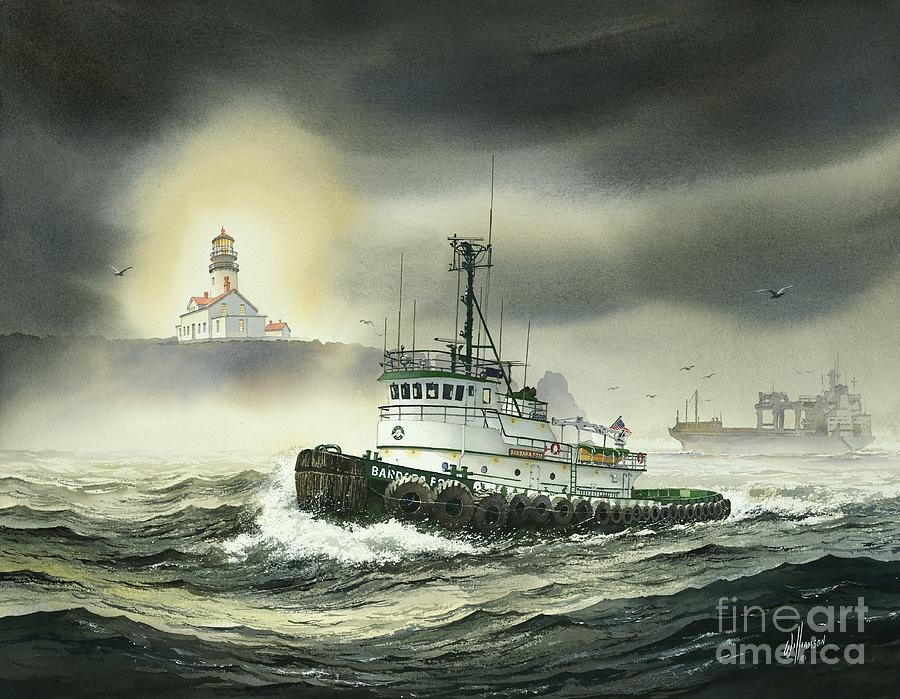 Barbara Foss is a painting by James Williamson which was uploaded on June 3rd, 2011.

Balmy fall weather gives way to winter storms and a higher risk of oil spills from tankers and cargo ships. Thanks to the tug Barbara FOSS, the Strait of Juan de Fuca has some extra protection. The Washington State Legislature approved funding for a rescue tug to be stationed at Neah Bay to help tankers and ships that run into trouble in the Strait. The arrival of Barbara FOSS marks the fourth year in a row that a rescue tug will be stationed at Neah Bay during the winter storm season.

Washington State Governor Gary Locke and Congressman pulled together a mix of federal and state resources to station a rescue tug at Neah Bay to cover the western portion of the Strait of Juan de Fuca and the outer Washington coast. �Our State has one of the best spill-prevention programs in the country, but we still have gaps in our coverage,� said Locke. �We cannot risk having a disastrous spill into the Strait and Puget Sound. If a ship goes adrift near the coast, there�s little chance of a commercial tug getting to it before it hits the rocks. We�ve been incredibly lucky so far. A rescue tug is not just smart � it�s imperative.�

The Barbara FOSS has responded to a number of incidents involving vessels that were drifting without power. It towed the vessels to safety and demonstrated its ability to run at high speed through very large waves. The outer coast and the Strait have a high volume of vessel traffic. They also support some of the state�s richest marine ecosystems and are prone to heavy winter storms.

Neah Bay A Strait of Juan de Fuca Bay, within the Makah Indian Reservation, extreme northwest Clallam County. This small bay is protected from the north by an artificial breakwater and is a popular rendezvous for saltwater sports fishing. In 1792, a Spanish fort was built here, the first building erected by white men in the State. In 1790, the Spanish Captains Manuel Quimper and Juan Francisco do Eliza took possession of the bay for Spain and named it Bahia de Nunez Gaona. In 1841, the Wilkes Expedition mapped the bay and called it Scarborough Harbor for Capt. James Scarborough of Hudson�s Bay Company. In 1847, Capt. Henry Kellett named it Neah Bay, using the name of a Makah chief whose actual name was Dee-ah. The present name is a slight simplification.

Cape Flattery A high rocky bluff, overlooking Tatoosh Island and the Pacific Ocean, on the Makah Indian Reservation, at the entrance to the Strait of Juan de Fuca from the ocean, extreme northwest Clallam County. This name, charted by Capt. James Cook of the British Navy on March 22, 1778, is the oldest name now in use on maps of the State of Washington, other than that of the Pacific Ocean. (And not including the native Indian names dating thousands of years) Capt. Cook chose it because the cape flattered him with the hope of a passage or opening between the cape and the island beyond, which was Vancouver Island. Cook, failing to find the Strait of Juan de Fuca because of bad weather, discredited its existence. Other names applied to the cape by early explorers were Cape Claaset and Punta de Martinez. The Indian name is Klasset.

James, Congratulations on your sale ! : )

The level of diffculiy in detail is something. The shades of greys that are going together are beautiful. Great painting.

Connie: Thank you for your positive comment. It was a tough painting to do. However I managed to pull it off. I wanted a Pacific Northwest storm look. Jim

Exceptional! Congratulations on your sale!

Outstanding! Congratulations on your sale.

Wow! This is beautiful, I love the atmosphere! Congratulations.

Beautiful picture! We see many of the Foss tugs here. Congratulations on your sale.

This image has a great power. Congrats on your sale!