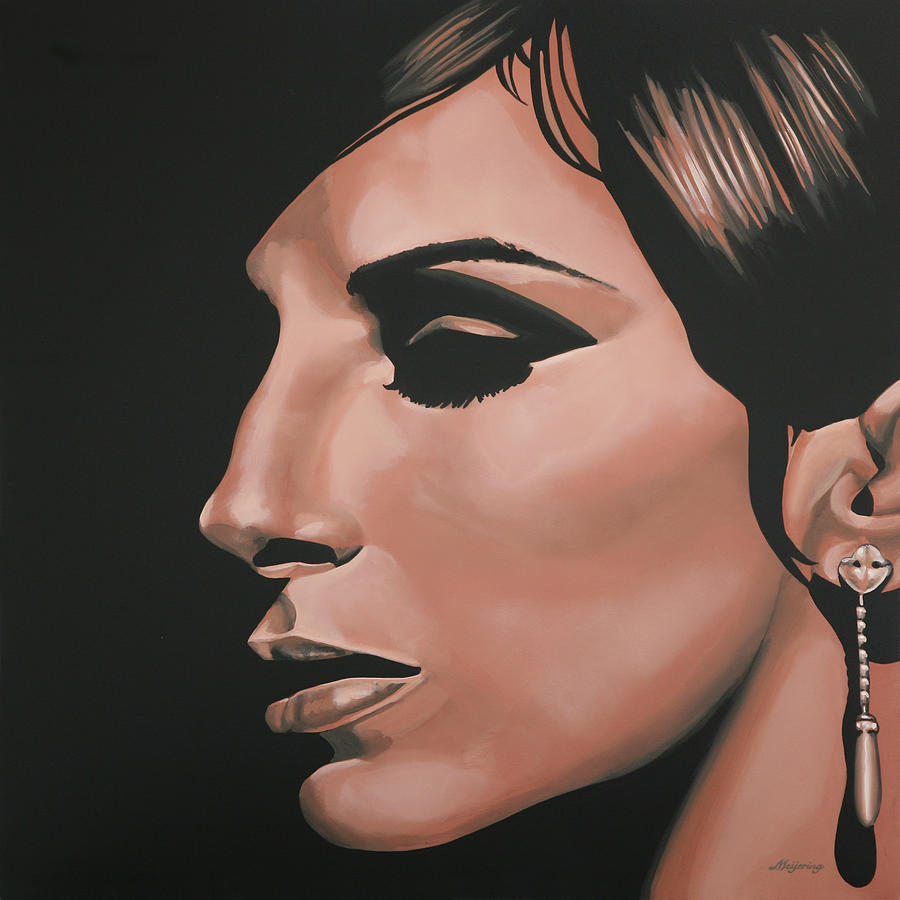 Barbra Streisand is a painting by Paul Meijering which was uploaded on April 24th, 2013.

Barbara Joan "Barbra" Streisand (born April 24, 1942) is an American singer, songwriter, actress, and filmmaker. In a career spanning six decades, she has become an icon in multiple fields of entertainment, which earned her recognition as Mother of All Contemporary Pop Divas or Queen of The Divas, and has been recognized with two Academy Awards, ten Grammy Awards including the Grammy Lifetime Achievement Award and the Grammy Legend Award, five Emmy Awards including one Daytime Emmy, a Special Tony Award, an American Film Institute award, a Kennedy Center Honors prize, four Peabody Awards, the Presidential Medal of Freedom, and nine Golden Globes. She is among a small group of entertainers who have been honored with an Emmy, Grammy, Oscar, and Tony Award, and is one of only two artists who have also won a Peabody.

Streisand is one of the best-selling music artists of all time, with more than 68.5 million albums in the United States and with a total of 145 million records sold worldwide, (The only female in the top ten, and the only artist outside of the rock 'n' roll genre.) making her the best-selling female artist among the top-selling artists recognized by the Recording Industry Association of America,
After beginning a successful recording career in the 1960s, Streisand ventured into film by the end of that decade. She starred in the critically acclaimed Funny Girl, for which she won the Academy Award and Golden Globe Award for Best Actress. Her other films include The Owl and the Pussycat, The Way We Were, and A Star Is Born, for which she received her second Academy Award, composing music for the love theme "Evergreen", the first woman to be honored as a composer. With the release of Yentl in 1983, Streisand became the first woman to write, produce, direct, and star in a major studio film. The film won an Oscar for Best Score and a Golden Globe for Best Motion Picture Musical; Streisand received the Golden Globe Award for Best Director, the first (and to date only) woman to win that award.

The RIAA and Billboard recognize Streisand as holding the record for the most top 10 albums of any female recording artist: a total of 34 since 1963. According to Billboard, Streisand holds the record for the female with the most number one albums (11).Billboard also recognizes Streisand as the greatest female of all time on its Billboard 200 chart and one of the greatest artists of all time on its Hot 100 chart. Streisand is the only recording artist to have a number-one album in each of the last six decades, having released 53 gold albums, 31 platinum albums, and 14 multi-platinum albums in the United States.

Congratulations on your outstanding artwork! It has been chosen to be FEATURED in the group “500 VIEWS.”

Congrats on your feature in the FAA Portrait Gallery - Musicians

Thank you so much, Scott, for all your support and the feature in your fantastic group!!;-))

Congrats on your feature in the FAA Portrait Gallery. 👍

Thank you so much, Scott, for all your support and the feature in your wonderful group!!;-))

Congratulations Paul Meijering on your new artwork "Barbra Streisand". It is now featured on the homepage of SQUARE ART WORLD

Thank you so much, Tonya, for all your support and the feature in your amazing group!!;-))

Congratulations on your sale! Stunning!

Congratulation on the Sale !