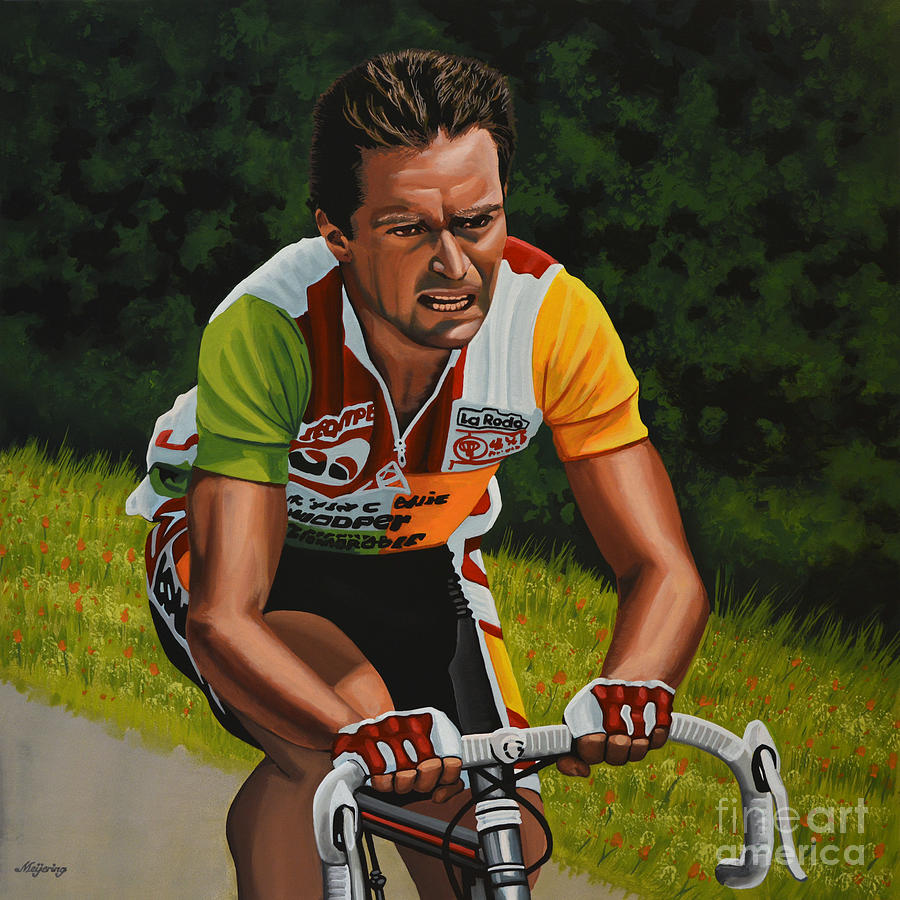 Bernard Hinault is a painting by Paul Meijering which was uploaded on December 16th, 2015.

Bernard Hinault is one of only six cyclists to have won all three Grand Tours, and one of two cyclists to have won each more than once (the other being Alberto Contador). He won the Tour de France in 1978, 1979, 1981, 1982 and 1985. He came second in 1984 and 1986 and won 28 stages, of which 13 were individual time trials. The other three to have achieved five Tour de France victories are Jacques Anquetil, Eddy Merckx and Miguel Indurain; of these, Hinault is the only one to have finished either first or second in each Tour de France he finished. He remains the last French winner of the Tour de France.

Hinault was nicknamed Le Blaireau (the badger), as he would often don a hairband, thus resembling a shaving brush. In an interview in the French magazine V�lo, however, Hinault said the nickname had nothing to do with the animal. He said it was a local cyclists' way of saying "mate" or "buddy" in his youth � "How's it going, badger?" � and that it came to refer to him personally. According to Maurice Le Guilloux, a long-time team-mate of Hinault, he and Georges Talbourdet first used the nickname when the three riders trained together in their native Brittany in the early years of Hinault's professional career.

Congratulations Bernard on your 1 Weekly - ALL Stars feature! L/F/Tw

Paul, this is stunning work!!!! Congratulations on your 1 Weekly - ALL Stars feature F/L

Fantastic painting Paul, Congratulations on your Feature in 1 Weekly-ALL Stars!...L

Congratulations on your feature in "Images That Excite You!"

Thank you so very much, John for your support and the feature in your exciting group!!...;-))