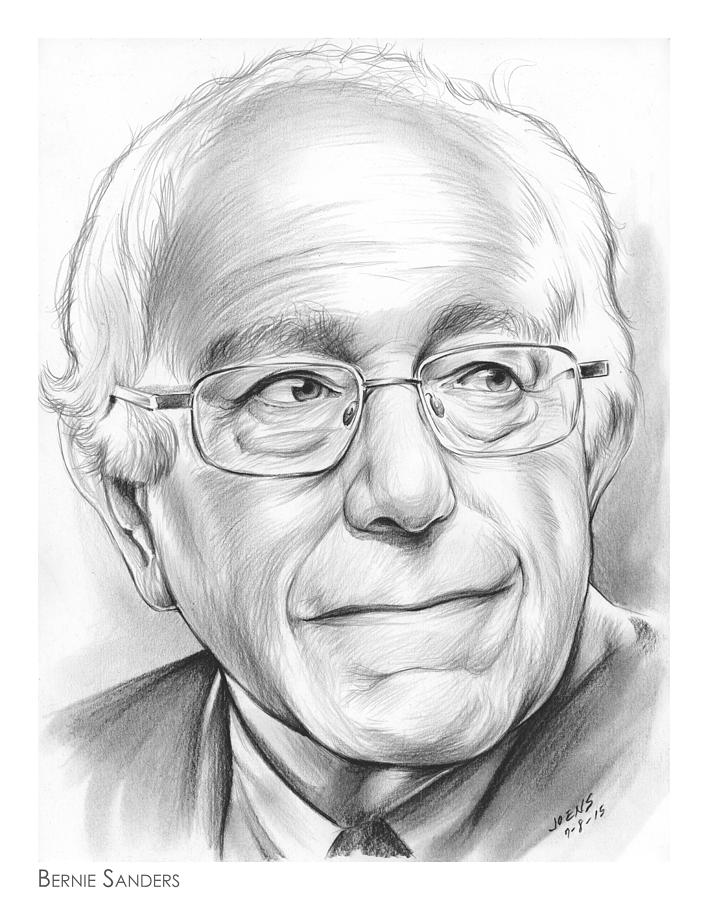 Bernie Sanders is a drawing by Greg Joens which was uploaded on July 8th, 2015.

(born September 8, 1941) is an American politician and the junior United States Senator from Vermont. He has announced his candidacy for the Democratic nomination in the 2016 presidential election.

Sanders is the longest-serving independent in U.S. congressional history. A self-described democratic socialist, he favors policies similar to those of social democratic parties in Europe, particularly those of Scandinavia. He caucuses with the Democratic Party and has been the ranking minority member on the Senate Budget Committee since January 2015.

After unsuccessful candidacies for Vermont's governor and U.S. senator, Sanders was elected mayor of Burlington, Vermont's most populous city, in 1981. He was reelected to three more two-year mayoral terms before being elected to represent Vermont's at-large congressional district in the United States House of Representatives in 1990. He served as a congressman for 16 years before being elected to succeed the retiring Republican-turned-independent Jim Jeffords in the U.S. Senate in 2006. In 2012, he was re-elected by a large margin, capturing almost 71% of the popular vote.

Since his election to the Senate, Sanders has emerged as a leading progressive voice on issues like income inequality, climate change, and campaign finance reform. He rose to national prominence on the heels of his 2010 filibuster of the proposed extension of the Bush-era tax rates for the wealthy. Sanders is also outspoken on civil liberties issues, and has been particularly critical of mass surveillance policies such as the Patriot Act.

Sanders announced his intentions to seek the Democratic Party's nomination for President on April 30, 2015, in an address on the Capitol lawn. His campaign was officially launched on May 26 in Burlington.

Unlike the other presidential candidates, Sanders will not pursue funding through a Super PAC, instead focusing on small individual donations. His campaign events have been drawing "overflow crowds" around the country. On July 1, 2015, Sanders's visit to Madison, Wisconsin drew the largest crowd of any 2016 presidential candidate so far, with an estimated turnout of 10,000.

According to a June 25 poll, Sanders is running in a "dead heat" with Hillary Clinton in New Hampshire.

Congrats on the sale of a beautiful portrait of an exceptional man.

Amazing portrait of a great man.

Our next POTUS, Bernie Sanders!

Thanks for your note Alexander!

Greg you are amazing!! This is such a perfectly wonderful portrait of Bernie - you just captured him!! I will be purchasing some of them - thanks so much!!!