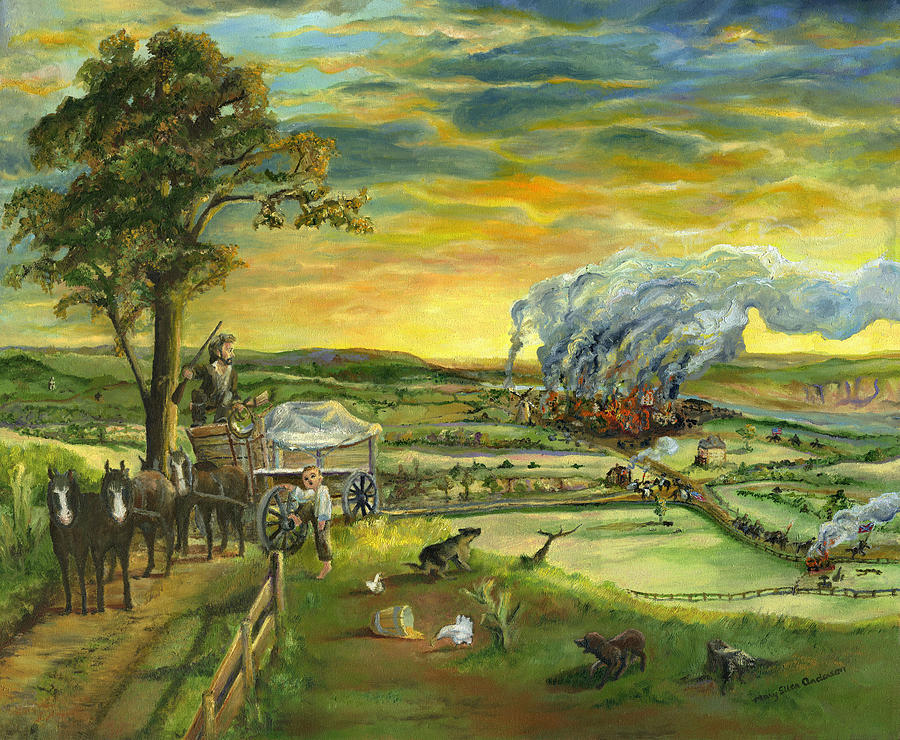 Bleeding Kansas - A Life and Nation Changing Event is a painting by Mary Ellen Anderson which was uploaded on July 31st, 2013.

This painting is inspired from the oral history that has been passed down in my family of my ancestor's eyewitness account of Quantrill's Raid on... more

This painting is inspired from the oral history that has been passed down in my family of my ancestor's eyewitness account of Quantrill's Raid on Lawrence, Kansas during the American Civil War. I have endeavored to be as geographically and historically accurate as possible, while still taking the necessary artistic license to tell the story.

In 2013 this painting was included in the city of Lawrence's public exhibition hosted by Watkins Historical Museum.

At dawn on August 21, 1863, 12 year old David Anderson's life and world changed forever when war came to his home, just outside of Lawrence, Kansas. Although too young to fight in the guerrilla war that became known as "Bleeding Kansas", David was drafted by the local freight man to take over his delivery route, so that the driver could fight in this war of neighbor against neighbor.

Leaving his childhood behind, David climbed into the freight wagon and in an actual 'rites of passage' successfully delivered his cargo to Salt Lake City, Utah. This triumphant arrival occurred just as the local Methodists minister's daughter was crossing the street and young David was immediately smitten. Her name was Rose and David called her his "Rose of the Valley". One thing leads to another and the former Irish Catholic boy returned home a man, with a new career (freight driver), a new bride and a new religion, changing forever not only his life but the lives of all his descendants including myself.

War changes all of us forever but rarely in the way we expect. Ideological differences that you assume war will settle still exist today and are even compounded by the scars of events like this raid. But inevitably in war boyhoods are lost, and futures are changed forever.
--Mary Ellen Anderson
WIP fb gallery on this painting: http://tinyurl.com/lve3pwa
WIP blog on this painting: http://tinyurl.com/l9plgkx

Other Notes:
Lawrence is the future site for the University in Kansas. Although the grounds for the university weren't dedicated until months after the raid, KU's first hall is depicted with scaffolding to represent this.

KU is also famous for it's school chant, of "Rock Chalk, Jayhawk. Go KU". The originals of this are in the rare deposit of 'Rock Chalk' that is depicted as a quarry and used as building material of KU.

The Confederate flag that is most associated with the Civil War and depicted, is actually historically incorrect. The Confederacy, and in particular guerrilla raiders were mostly self-equipped, including uniforms and insignia. The X flag was the battle flag for a KY regiment. The actual Confederate flag was probably rare. However, due to the accepted association with the Confederacy I've used it here.

Wikepedia:
Between three and four hundred riders arrived at the summit of Mount Oread, then descended on Lawrence in a fury. Over four hours, the raiders pillaged and set fire to the town and killed most of its male population. Quantrill's men burned to the ground a quarter of the buildings in Lawrence, including all but two businesses. They looted most of the banks and stores and killed between 185 and 200 men and boys. According to an 1897 account, among the dead were 18 of 23 unmustered army recruits.[19] By 9 a.m., the raiders were on their way out of town, evading the few units that came in pursuit, and splitting up so as to avoid Union pursuit of a unified column.

The city seal of Lawrence commemorates Quantrill's attack with its depiction of a Phoenix rising from the ashes of the burnt city.

For his part, Quantrill led his men south to Texas for the winter. By the next year, the raiders had disintegrated as a unified force, so were unable to achieve similar successes. William Clarke Quantrill died of wounds received in Kentucky in 1865, with only a few staunch supporters left. Among these appear to have been Frank James and his younger brother, Jesse James.[36]

Thank you for participating in my contest. Lovely Art Work. L

You are one amazing artist! A perfect story teller. l/f

Thanks so much Michael and Kruti.

this is so elegant and detailed, fantastic.

Great and congratulation on sale announcement.

Thank you very much, to the buyer from Kansas City, MO.

This is great keeping history alive in the tradition of painting.

I felt very privileged to be able to share these stories and history. It's amazing what you discover about yourself in examining our history.

Thank you everyone for the wonderful comments and emails on this piece. And a special thank you to Watkins Museum and the people that attended the current exhibition. It's a true honor to be exhibiting beside such historical artists as Ernst Ulmer, and because this is such a personal story all the more special to me. --Mary Ellen Anderson

Congratulations on your feature, that is a very poignant story, kids had it tought back then. So much drama and you rendered it to life real good, I love the colors and mood it sets to the piece. You narrating the events and acknowledging being one of his descendants brings the story home and makes it event more valuable. Thanks for sharing that part of history. VF

love the details on your painting :) v/f 8

Your art is amazing Mary Ellen. Love the story that goes with this and war does indeed change everything. Very strong emotionally, thank you for the full details of this - it made it even better, if that were possible! v/f

Thank you Bob and Nadine for featuring this in 'Artists News'.

Thank you Jon. This painting will be on exhibit at Watkins Museum through October, and my gallery is inside Anderson Rentals @ 6th & Michigan. Would love to meet you.

Thank you Angelina for featuring this. Very much appreciated.

Very interesting image and story Mary Ellen. My son lives in Lawrence and I will try to stop in the next time we are in town. f/v

Thank you Darren for featuring this in 'Greeting Cards for All Occassions'.

Thank you Shannon for featuring this in 'Sun Clouds and Water'.

Thank you Gynt, for featuring this in 'Greetings and Posters'.

Thank you Kandy. It's truly been a rewarding experience getting to tell this story.

What a powerful story you're painting depicts and it was interesting to read the description ...v