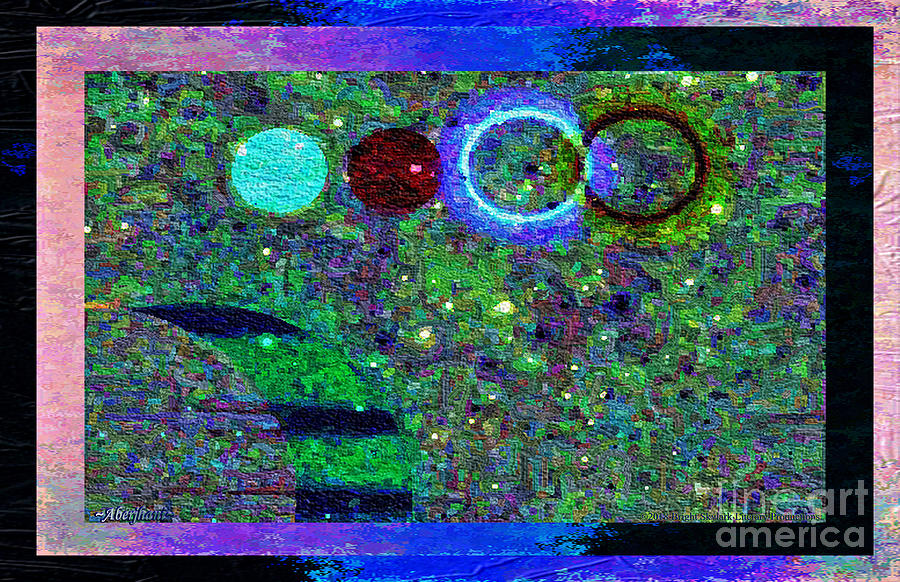 Blossoms of Nonviolent Conflict Resolution is a mixed media by Aberjhani which was uploaded on June 18th, 2018.

Nonviolent conflict resolution is not a new idea to most people hoping to see a big reduction in the violence that destroys relationships between... more

Nonviolent conflict resolution is not a new idea to most people hoping to see a big reduction in the violence that destroys relationships between individuals, countries, and organizations. Turning that idea into effective practice has proven to be a different challenge altogether. This artwork, however, acknowledges that there are at least as many people in our global community committed to waging peace as there are to waging war.
The central image, with its floating circles representative of separations and unity, and the impressionistic green garden symbolic of shared destinies, serve as a visual metaphor for our worldwide population of billions. Many connect these days through social media and other means to reaffirm each other's value in both the larger and the smaller scheme of things. The style of French impressionism attempting a Claude Monet-like effect was a good one for communicating this concept.

The double frame might appear to be an optical illusion but it is not meant to confuse viewers. The black, salmon, blue, pink, purple, and light turquoise colors flow toward each and through each other to dramatize the need for conscious co-existence capable of infusing our lives with harmonious beauty.

It just so happened that this nearing completion as American President Donald Trump and North Korea's "Supreme Leader" Kim Jong-un holding their historic meeting in Singapore. That seemed to be one step in the right direction. Then a week later news broke about protests against the Trump administration's horrendous practice of separating immigrant children from parents. It all seemed to underscore the urgent need to confront volatile issues with strategic uses of mindfulness, compassion, and nonviolence.

This a fantastic work. Dynamic and peaceful at the same time. l/f

Simply amazing. I love that your art represents the struggles both at a global level but also at a very personal level.

In that regard Shoal I'm trying to follow in traditional established by artists of commitment who paved the way. Thanks for noticing.

Thank you Geraldine. This took a while to complete but I enjoyed the extended process.