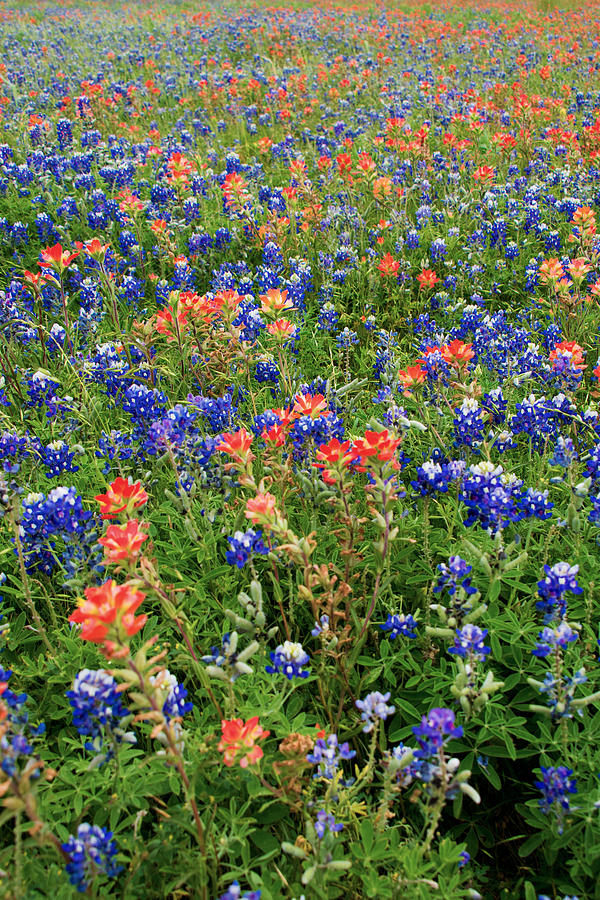 Bluebonnets and Paintbrushes 3 - Texas is a photograph by Brian Harig which was uploaded on May 8th, 2014.

Bluebonnet is a name given to any number of species of the genus Lupinus predominantly found in southwestern United States and is collectively the... more

Bluebonnet is a name given to any number of species of the genus Lupinus predominantly found in southwestern United States and is collectively the state flower of Texas. The shape of the petals on the flower resembles the bonnet worn by pioneer women to shield them from the sun.

On March 7, 1901, Lupinus subcarnosus became the only species of bluebonnet recognized as the state flower of Texas, however Lupinus texensis emerged as the favorite of most Texans. So, in 1971, the Texas Legislature made any similar species of Lupinus that could be found in Texas the state flower. Their deep-blue blossoms can be seen from March through May in most areas of Texas, as they are heavily planted on roadsides and highway rights of way.

Castilleja, commonly known as Indian paintbrush or prairie-fire, is a genus of about 200 species of annual and perennial herbaceous plants native to the west of the Americas from Alaska south to the Andes, northern Asia, and one species as far west as the Kola Peninsula in Siberia. These plants are classified in the broomrape family, Orobanchaceae (following major rearrangements of the order Lamiales starting around 2001; sources which do not follow these reclassifications may place them in the Scrophulariaceae). They are hemiparasitic on the roots of grasses and forbs. The generic name honours Spanish botanist Domingo Castillejo.

One of my favorite subjects, as I grew up in Texas! Wonderful capture!

Congratulations! Your fantastic photographic art has been chosen as a Camera Art feature! You are invited to archive your work in the Features Archive thread as well as any other thread in which it would fit!

Congratulations! Your marvelous art has been featured on the Home Page of the ABC Group. This art has been selected from the ABC Group's U IS FOR UNLIMITED themed week where all art had unlimited objects within it. You are invited to add this to the features archive discussions and in another discussion in ABC Group!

Congratulations on your new sale Brian!

We welcome this lovely nature scene to The 200 Club, a "rising star" group in which only a select few are featured. It is my pleasure to feature desirable art work like this. Congratulations on your well-deserved feature in our high activity group and elsewhere and on your hundreds of views.

I like this image a lot! Congratulations on your feature in the "Puzzles" group at http://fineartamerica.com/groups/puzzles--one-per-day.html

Wonderful image! Congratulations on your feature in the “Landscape and Landmark Photography” group!

Beautiful! Congratulations, your wonderful work is featured in "Images That Excite You!"

Revisiting! I miss the beautiful blue bonnets in Texas!

Congratulations Brian! Your fabulous capture has been Featured in our group The Gold Standard, because of its excellence! Also added my fav/tweet/like