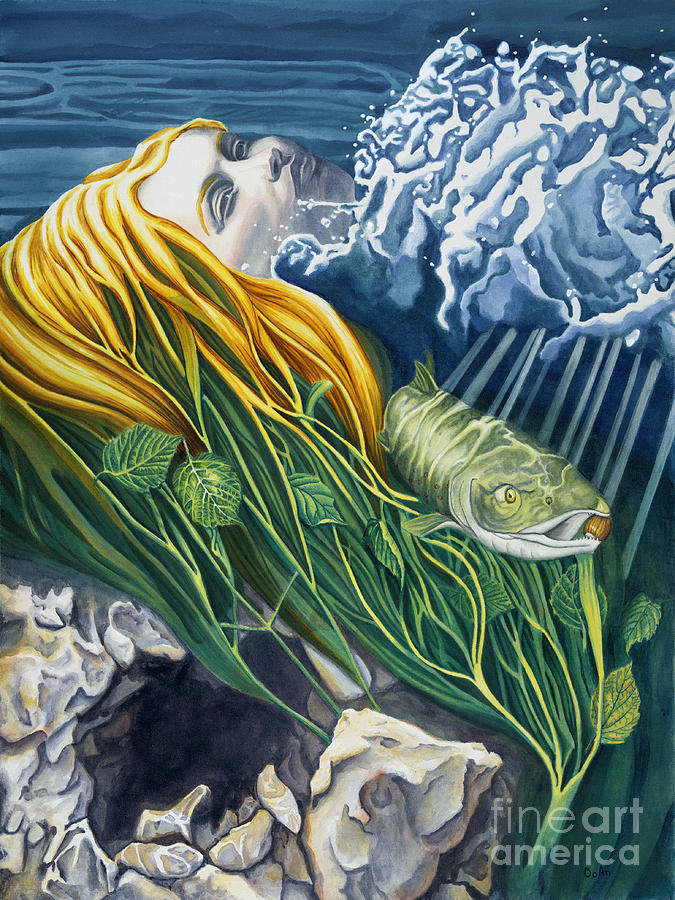 Boann Transformation of a Goddess is a painting by Antony Galbraith which was uploaded on April 23rd, 2008.

Boann Transformation of a Goddess

Please note: the watermark Fine Art America which appears on the image will not be on the final purchased print.... more

Boann Transformation of a Goddess

Please note: the watermark "Fine Art America" which appears on the image will not be on the final purchased print.

This painting represents the transformation of the goddess Boann into the River Boyne.

Boann's husband was Nechtan, who was keeper of the sacred well Segais (the Well of Wisdom). Around the well grew nine magical hazel trees, from which grew magical crimson hazelnuts. The nuts fell into the well feeding the five colorful salmon that lived inside the well. Each salmon represented wisdom obtained through the five senses and had distinctive crimson spots on their bellies from eating the hazelnuts. All, but Nectan and his assistants, were forbidden to approach the well.

This restriction irked Boann, and she decided one day to approach the well. To spite her husband, whom she believed greedily coveted the well, Boann approached the well counter clockwise. But what she didn't know is that the well itself had specific conditions in which one could gaze into it. One must approach clockwise three times before looking straight and steadily into the well or one's eyes would burst from the power of the wisdom contained within.

Boann peered cautiously into the well, which caused the water to rise angrily and it took one of her eyes. Because she approached the well counter clockwise, she had further angered the waters and so the well erupted with a torrent. Boann fled from the rushing waters losing an arm and a leg before the angry waters reached the sea, leaving behind a 70 mile long river, now called the Boyne River.

Having lost one eye, one arm, and one leg, Boann was transformed. She existed from that point on somewhere half in and half out of the physical world. She became the soul of the river, but also something much more powerful. For when she released the waters of Segais, she freed the salmon of knowledge into the world. Now humans had access to the wisdom reserved only for the gods. Anyone who ate the flesh of the salmon, instantly possessed the knowledge they contained.

Boann then became the patron goddess of poetic and spiritual inspiration. Her influence bridges the gap in the wisdom of mind to allow the feminine nature in each of us to stream into our being. Her sacrifice represents the transformation of the self that is required for wisdom to enter. Her essence is present in all rivers. To call upon her, one must simply invoke her name while sitting next to a river and listen with a clear mind and an open soul. Her gift of wisdom will transform you.

artwork and text - Copyright 2005-2010 DoAn Art (Antony Galbraith) unless indicated otherwise. All Rights Reserved. Any downloading, copying or use of images on this website is strictly prohibited without express written consent by Antony Galbraith.

Thanks Michael. I find myth so fascinating, but I didn't want to just rehash old stories. I wanted to find a personal connection to the old stories that felt relevant to life today.

Thanks Carol. I have to admit that the notion of composition puzzles me. I hope to understand it, but the concepts seem to ellude me. Often what I draw is not much like what comes out in the painting. I am glad, however, that my piece works compositionally! Hopefully one day I will understand what I am doing!

This is a truely wonderful piece.

DoAn,...this painting is absolutely outstanding! It grabs you and invites you in to another world -- Stunning!

Thanks Joe! I am so glad that you felt invited to the other world!