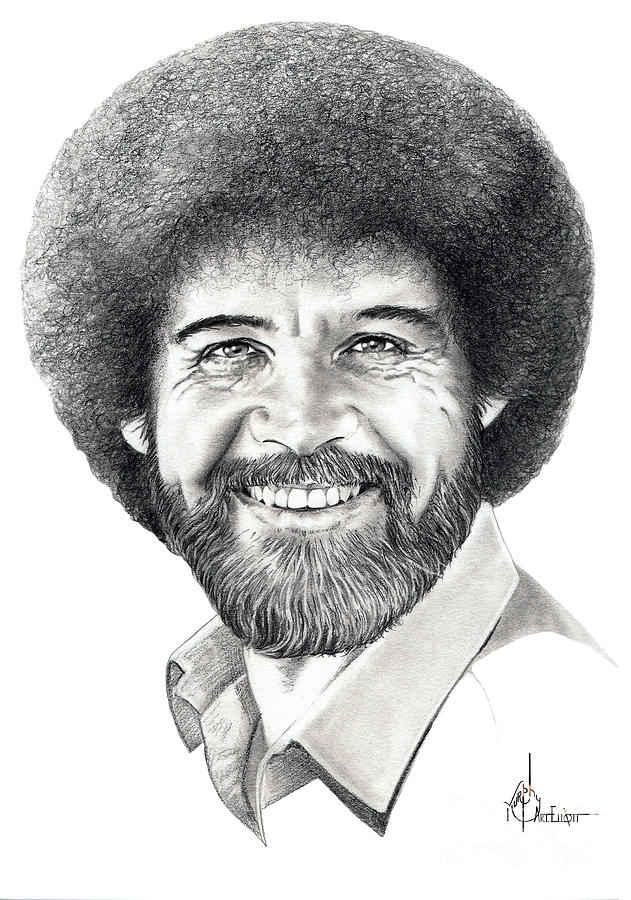 Bob Ross is a drawing by Murphy Elliott which was uploaded on June 12th, 2010.

11 x 14 pencil portrait of Bob Ross on 100 lb. Stratmore bristol vellum by Murphy Art. Elliott
Robert Norman Ross (October 29, 1942 – July 4, 1995) was an American painter, art instructor, and television host. He was the creator and host of The Joy of Painting, an instructional television program that aired from 1983 to 1994 on PBS in the United States, and also aired in Canada, Latin America, and Europe. With a soft voice and a permed afro, Ross went from being a public-television personality in the 1980s and 1990s to being an Internet celebrity in the 21st century, popular with fans on YouTube and many other websites.
Ross used the wet-on-wet oil painting technique, in which the painter continues adding paint on top of still-wet paint rather than waiting a lengthy amount of time to allow each layer of paint to dry. From the beginning, the program kept the selection of tools and colors simple so that viewers would not have to make large investments in expensive equipment. Ross frequently recommended odorless paint thinner (aka odorless mineral spirits) for brush cleaning. Combining the wet painting method with the use of large one- and two-inch brushes, as well as painting knives, allowed Ross to paint trees, clouds, mountains, and water in a matter of seconds. Each painting would start with simple strokes that appeared as nothing more than smudges of color. As he added more and more strokes, the blotches would transform into intricate landscapes.[10][12]

Ross created three versions of each painting for each episode of his show. The first was painted prior to taping, and sat on an easel, off-camera, during taping, where Ross used it as a template to create the second copy—the one viewers actually watched him paint. After taping the episode, Ross painted a third, more detailed version for inclusion in his instructional books.[13]

Murphy, This is so amazing! Nice work!

Congratulations on your tie for 3d place in the TV Celebrity contest! l/f

Outstanding capture and artwork! Fl …voted in the Load Up To 10 … contest

One of your peers nominated this image in the 1000 views Groups nominated images by your fellow artist in the Special Features #11 promotion discussion. Please visit and pass on the love to another artist.

Congratulations!! This stunning Black and White image has been featured today in "Creative Black and White Fine Art Photographs" Group!! You are welcome to add a preview of this featured image to the group’s discussion post titled “Stunning Group Features in NOVEMBER 2017” for a permanent display within the group, to share this achievement with others.

Your portraits are amazing, especially this one. You have captured the very essence of Bob in his eyes. I love the way you have done his hair. Nice use of graphite, clean and crisp. Good stuff!!

Loved Bobs Art Class on Sundays !!! Bob wouldve loved this portrait of himself !!! Happy Hair ;) Mr Ross had great talent and so do you Mr Elliott ,Great Job ! Great Hair Texture and eyes are great

I miss him, he was always so positive with his "let's put a happy little tree over here". Beautiful drawing!

Oh my God, I remember watching Bob on Sunday mornings....his happy accidents and titanium white. This put a smile on my face. So well done Murphy!

Congrats on your sale. Excellent drawing.