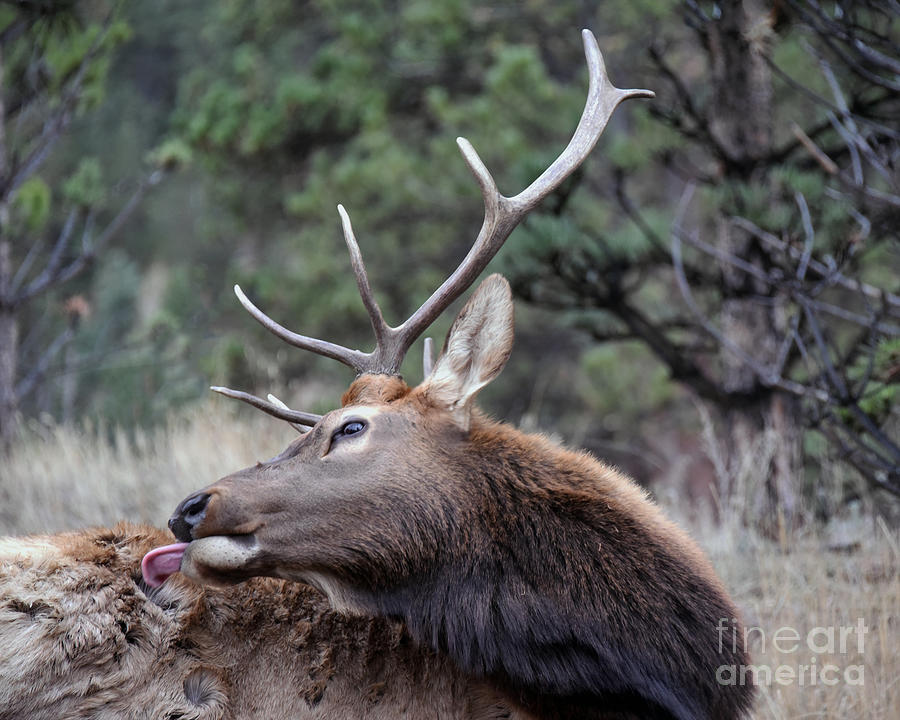 Bull Elk Grooms Himself is a photograph by Catherine Sherman which was uploaded on November 4th, 2018.

This bull elk groomed himself after rubbing his antlers against a tree near a condominium... more

This bull elk groomed himself after rubbing his antlers against a tree near a condominium parking lot in Estes Park, Colorado, in early November. The rutting season was over, and this guy missed out on romance, but he's keeping himself in shape and looking good. Maybe next year he'll find success. In the meantime, he's hanging out with his other male friends.

I was visiting Rocky Mountain National Park in Colorado (RMNP), hoping to see elk, when friends texted me that seven bull elk were grazing on the lawn outside of the condominiums where we were staying in Estes Park. I didn't see elk in the park, but we saw several herds of elk and several small groups making themselves at home inside of the town.

Estes Park is just outside of RMNP.

The elk or wapiti (Cervus canadensis) is one of the largest species within the deer family, Cervidae, in the world, and one of the largest terrestrial mammals in North America and Northeast Asia. This animal should not be confused with the still larger moose (Alces alces) to which the name "elk" applies in British English and in reference to populations in Eurasia.

Elk range in forest and forest-edge habitat, feeding on grasses, plants, leaves, and bark. Male elk have large antlers which are shed each year. Males also engage in ritualized mating behaviors during the rut, including posturing, antler wrestling (sparring), and bugling, a loud series of vocalizations that establishes dominance over other males and attracts females.

Congratulations, Catherine – your "wildlife portrait" scene has been featured by the Go Take a Hike Photography Group! Feel free to add it to the 2021 Featured Images thread in the group discussion board for archive.

Thank you very much for the feature, Larry!

Thank you very much, Roy!

Thank you very much, Stephen!

Thank you very much, Greg!

Thank you very much, Lynn!