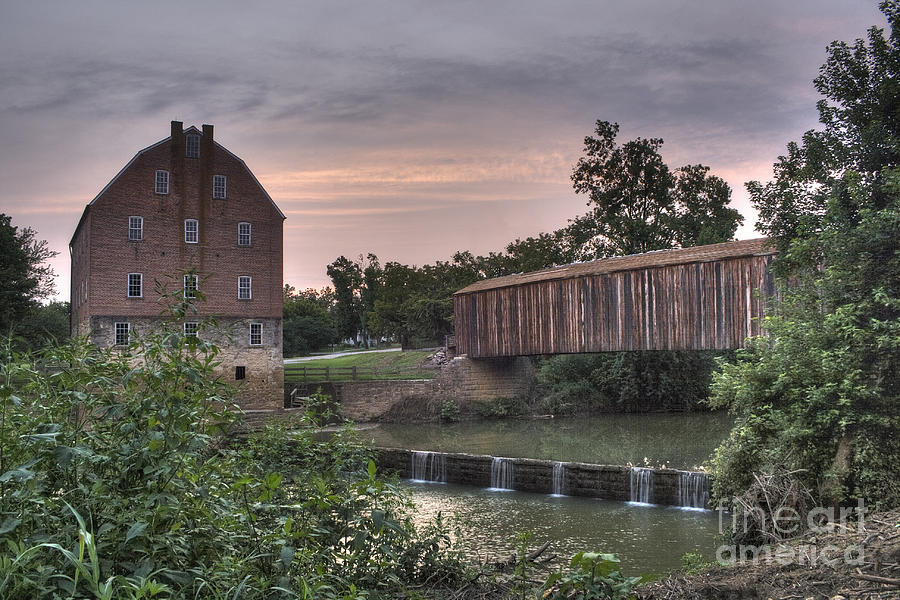 Burfordville Mill is a photograph by Larry Braun which was uploaded on January 24th, 2015.

In 1797, George Frederick Bollinger received a land grant from the Spanish Government and moved with several other families from North Carolina to what is now Burfordville, Missouri.

In 1800, Bollinger began building a log dam and mill on the Whitewater River. In 1825, Bollinger rebuilt the mill and dam using limestone.

After Bollinger�s death in 1842, his daughter Sarah Daugherty and her sons continued to operate the mill until the Civil War, when the mill was burned by the Union army in order to prevent the supply of flour and meal to the Confederate army. Following the war, the mill site was sold to Solomon R. Burford.

The current four-story brick mill was completed by Burford in 1867 and is built upon the limestone foundation of the 1825 building. Burford owned the mill until 1897, when the Cape County Milling Company took over operations and continued operating the mill until 1953 when the mill was sold to the Vandivort family, relatives of George Bollinger.

The mill was donated to the Cape Girardeau County Historical Society in 1961 and to the State of Missouri in 1967. Three years later, the mill was added to the National Register of Historic Places.

Bolinger mill, dating to the Civil War period, is a massive four-story stone and brick building where visitors can still observe corn being ground into meal by water power - just as it was done long ago. The succession of three mills that have stood on this site represent more than 200 years of milling history.

The Burfordville Covered Bridge standing alongside stretches its 140-foot span across the Whitewater River, which powers the mill. Begun in 1858, it is the oldest of only four remaining covered bridges in Missouri.