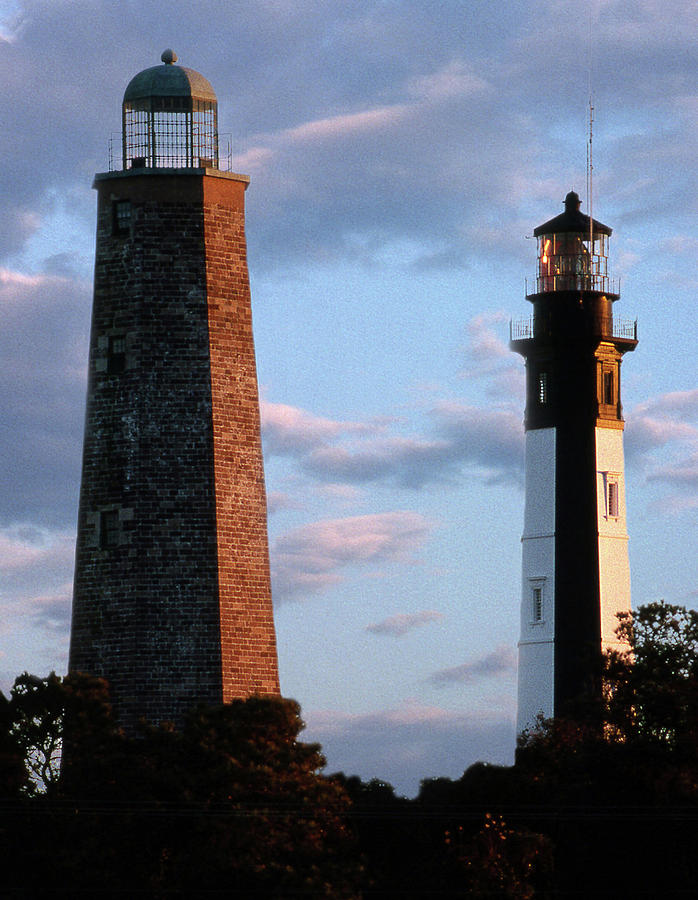 Cape Henry Lighthouses In Virginia is a photograph by Skip Willits which was uploaded on March 31st, 2011.

Both the old (on the left) and the new (on the right) Cape Henry lighthouses in Fort Story, Virginia Beach, VA. Capes Henry and Charles in Virginia... more

Both the old (on the left) and the new (on the right) Cape Henry lighthouses in Fort Story, Virginia Beach, VA. Capes Henry and Charles in Virginia at the mouth of the Chesapeake Bay were named after the two sons of King James of England. The first lighthouse on the Chesapeake Bay was erected on Cape Henry in 1792 at a cost of $15,200, most likely an outrageous sum for that time. The sandstone tower is 90 feet tall and a local man, Laban Gossigan, became the first keeper.

The Virginia Governor offered President Washington assistance in erecting a tower at the current site. It seems that a certain amount of materials were placed at that location by the state and they would be available for the construction by the Federal government. Blowing and shifting sands had buried the building materials and they had to be replaced. The contract to build the tower was signed by Alexander Hamilton and awarded to an New York brick layer, John McComb, Jr.

During the Civil War the Confederates destroyed the lantern, only to be replaced in 1863. A military guard was placed at the light until the end of the war. By 1872 cracks appeared in the walls and the Lighthouse Board recommended it be replaced. By 1879 construction on the new tower had begun.

The Lighthouse Board ordered the replacement of the tower and the new one was completed in 1881 at a cost of $125,000. Like the Cape Charles light, this southern beacon was fitted with a huge first order Fresnel lens. Not just a bay light, but an offshore sentinel for all shipping entering the bay and as such required the largest of lights. In 1929, this beacon became the first radio-distance-finding station. The light flashes the dot-dot-dash pattern of the letter �U� at 80,000 candlepower.

Many thanks to my buyer from Atlantic Beach, FL.

Thanks Jeff, Gary and Jeff again.

Beaufitul! Kudo for you!

Thanks Larisa and Jon.

Thanks to my Rock Mount, VA buyer.

Many thanks to my Virginia Beach buyer.

Beautiful capture of the lighthouses in Virginia.....beautiful natural colors and beautiful light! L/F