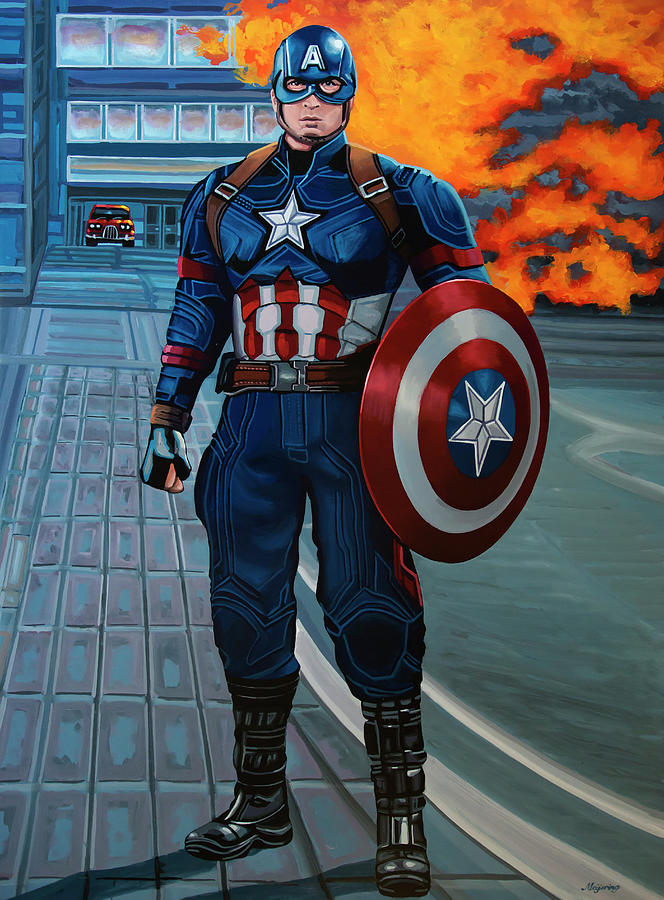 Captain America Painting is a painting by Paul Meijering which was uploaded on March 31st, 2020.

Realistic acrylic painting of Chris Evans as Captain America and Steve Rogers, painted by the Dutch fine artist Paul Meijering - the Original painting is 120 x 90 cm and for sale

Captain America: The First Avenger is a 2011 American superhero film based on the Marvel Comics character Captain America. Produced by Marvel Studios and distributed by Paramount Pictures, it is the fifth film in the Marvel Cinematic Universe (MCU). The film was directed by Joe Johnston, written by Christopher Markus and Stephen McFeely, and stars Chris Evans as Steve Rogers / Captain America, alongside Tommy Lee Jones, Hugo Weaving, Hayley Atwell, Sebastian Stan, Dominic Cooper, Neal McDonough, Derek Luke, and Stanley Tucci. Set predominantly during World War II, the film tells the story of Steve Rogers, a sickly man from Brooklyn who is transformed into the super-soldier Captain America and must stop the Red Skull, who intends to use an artifact called the Tesseract as an energy-source for world domination.

The film began as a concept in 1997 and was scheduled for distribution by Artisan Entertainment. However, a lawsuit not settled until September 2003 disrupted the project. In 2005, Marvel Studios received a loan from Merrill Lynch, and planned to finance and release it through Paramount Pictures. Directors Jon Favreau and Louis Leterrier were interested in directing the project before Johnston was approached in 2008. The principal characters were cast between March and June 2010. Production began in June 2010, and filming took place in London, Manchester, Caerwent, Liverpool, and Los Angeles.
Captain America: The First Avenger premiered at the El Capitan Theatre on July 19, 2011, and was released in the United States on July 22, 2011. The film was commercially successful, grossing over $370 million worldwide. Critics particularly praised Evans' performance, the film's depiction of its 1940s time period, and Johnston's direction. Two sequels titled Captain America: The Winter Soldier and Captain America: Civil War were released in 2014 and 2016 respectively.