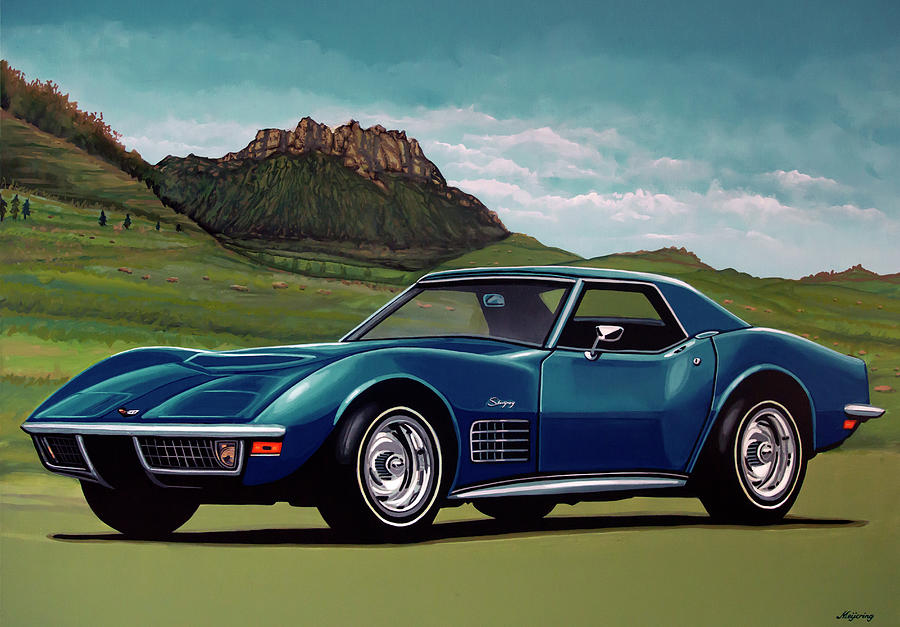 Chevrolet Corvette Stingray 1971 Painting is a painting by Paul Meijering which was uploaded on January 18th, 2018.

Realistic acrylic painting of the Corvette Stingray Coupe, painted by the Dutch fine artist Paul Meijering - the Original painting is 120 x 90 cm and for sale

The Chevrolet Corvette (C3) was a sports car that was produced by Chevrolet for the 1968 through 1982 model years. Engines and chassis components were mostly carried over from the previous generation, but the body and interior were new. It set new sales records with 53,807 produced for the 1979 model year. The C3 is the third generation of the Chevrolet Corvette, while the 1969 through 1976 models mark the second generation of the Corvette Stingray.

The Chevrolet Corvette, known colloquially as the Vette or Chevy Corvette, is a sports car manufactured by Chevrolet. The car has been produced through seven generations. The first model, a convertible, was introduced at the GM Motorama in 1953 as a concept show car. Myron Scott is credited for naming the car after the type of small, maneuverable warship called a corvette. Originally built in Flint, Michigan and St. Louis, Missouri, the Corvette is currently manufactured in Bowling Green, Kentucky and is the official sports car of the Commonwealth of Kentucky.

Congratulations for your sale, Paul! Fabulous artwork of my favorite car. We have owned 5 mid year models, and ‘85 & ‘86 glass top models. I love the background, really showcasing this Corvette. LF Janet 💕

Thank you so very much, Robyn, for your compliment, support and the feature in your amazing group!!;-))...

Thank you so very much, Robyn, for your compliment, support and the feature in your wonderful group!!;-))...

Congratulations! Your skillful and interesting painting has been FEATURED on our homepage. Well done

Thank you so very much, John, for your compliment, support and the feature in your marvellous group!!;-))...

Congratulations, your art is featured on the homepage of "Created by My Hands"

Thank you so much, David, for all your support and the feature in your creative group!!;-))