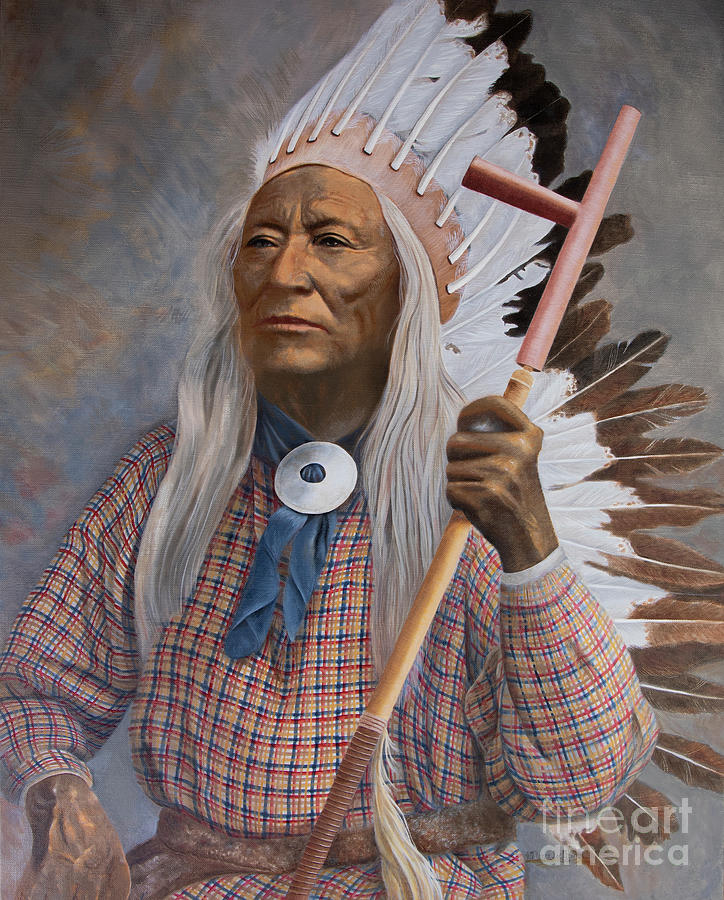 Chief Washakie Of The Eastern Shoshone is a painting by Nancy Lee Moran which was uploaded on February 16th, 2019.

Chief Washakie Of The Eastern Shoshone

Chief Washakie Of The Eastern Shoshone

Chief Washakie (born circa 1804-1810, died 1900)
"His prowess in battle, his efforts for peace, and his commitment to his people's welfare made him one of the most respected leaders in Native American history." (Wikipedia)

In the oil on linen, the chief is almost life-size. A commission, the 24x30-inch painting resides in a Wyoming home. I hope it honors the great dignity of the chief.

I give special thanks to my contact in the archives of the Nebraska State Historical Society, Laura Mooney, Senior Museum Curator. She unwrapped headdresses and peace pipes for me to study. At the museum I also studied a circle-tin decoration like the one worn by the chief. I was able to study doeskin (for the headdress brow band) in a hunter's shop.

Pipe
His pipe stem has horsehair decoration tied round the soft wood, which was likely ash or basswood. The warm, muted tones of his carved pipe arose from Daniel Smith brand of Minnesota Pipestone, which is exactly the same shade as the stone that the Plains Indians revered for the making of their pipes. The oil paint is a combination of ground pipestone, linseed oil, and modern synthetics. When rubbed with oil by its carver, a pipe took on a reddish cast similar to iron oxide.

Often the Ute and Shoshone tribes used pipestone that was white-on-green-marbled-cupric pipestone found in Wyoming and South Dakota. Often tribe members traded for the warm-earth-colored Catlinite pipestone from the sacred site in Minnesota (now called Pipestone National Monument). The long pipe barrel led me to guess Minnesota pipestone, since Ute and Shoshone pipe barrels were often short and squat. Catlinite is a type of argillite (metamorphosed mudstone) that occurs in a matrix of Quartzite.

Feathers
The spotted tail feathers are from immature (subadult) golden eagles, the kind of feathers most sought by warriors of the past. U.S. Fish and Wildlife Service, National Eagle Repository, makes quality, loose feathers available to enrolled members of Federally recognized tribes. "Native Americans may give feathers or other eagle items as gifts to other Native Americans and may hand them down within their families. They may not, however, give them to non-Native Americans."

Shirt
Historical black and white photos show the chief wearing a plaid shirt. I researched the colors of Woolrich plaids on cotton (calico) shirts of the time period and considered the colors of the natural dyes used then.

Wyoming
In September 2018, I visited the Washakie Museum in Worland, Wyoming, and drove through the incredible Wind River Canyon.

Another story:
"Deep in the basement of Chicago’s Field Museum’s Anthropology Department lie thousands of artifacts removed from the Eastern Shoshone and Northern Arapaho tribes of Wyoming over a hundred years ago."
URL = http://www.alpheusmedia.com/blog/view/the_myth_of_the_vanishing_race

2012 Visit
The Anthropology Department hosted a special visit to the collections by elders from the Northern Arapahoe and Eastern Shoshone tribes from Wind River Reservation in Wyoming.
URL = https://www.fieldmuseum.org/node/1366

Would you would like to use my art on your website or blog, to attract and hold the interest of your visitors? Just email or phone me. Almost of my art is available to license for personal and professional use.

NOTE: The Fine Art America logo does not appear on items that you purchase.

Copyright Notice: This image does not belong to the public domain. It may be licensed by asking permission, nancylee@nancyleemoran.com. All artwork in the Moran portfolio is copyrighted and owned by the artist, Nancy Lee Moran. All rights reserved.

Spectacular! Congratulations on your winning the contest! Fl

I'm thankful to you, Gary Richards!

CONGRATULATIONS on your FIRST PLACE TIED WIN, in the Inspirations Contest, Nancy! Such a marvellous Painting and description. LF

Thank you, Laurel! How kind of you to appreciate the description, too. I especially like your 2019 watercolor named "Meaning Of Life."

Congratulations on your win in the Inspiration contest! LF

How kind of you, Kay!

Absolutely magnificent, Nancy! Appreciate greatly the amount of research and work that went into this extraordinary portrait of excellence. F/L

Well-crafted and well-researched, with a wonderfully detailed backstory! l/f

Thank you, Dorothy Pugh! I'm appreciative that you took time to read the story of the art.

This is just gorgeous Nancy!! l/f