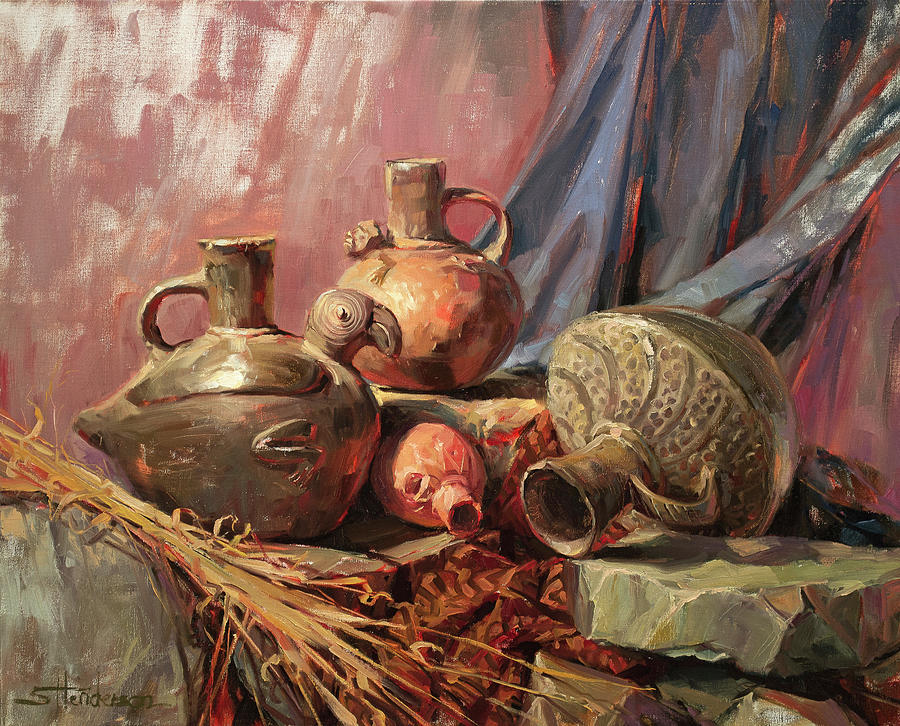 Chimu is a painting by Steve Henderson which was uploaded on March 17th, 2017.

In an unusual still life, a selection of Pre-Columbian artifacts of the Chimu people of Peru takes center stage.... more

In an unusual still life, a selection of Pre-Columbian artifacts of the Chimu people of Peru takes center stage.

Interestingly, the pottery of the Chimu is not a rarity, and if one wants, one can find it for sale from various museums who have too much of it in their collection: it was made, and used by, ordinary people, for the ordinary aspects of their lives. Uncovered by gold and silver and precious gems, it is thought to be of little worth because it is not covered with the baubles and rocks and stones that we treasure so much.

But the value of the pottery of Chimu lies in its sheer ordinariness, because, though we are stuck with kings and princes and emperors and dukes and presidents and prime ministers and all sorts of people who are convinced that they are more important than others, ordinary people are who and what make up the bulk of humanity, and of history.

It is awe-inspiring to pick up a piece of pottery such as one shown in Chimu – in holding it, one wonders, “Who held this last, the last time it was actively used? Did they have children and a family? What are the things they worried about? What did they get excited about?”

It is highly likely that, though the technology of the person who used the pottery would not look like the technology of today, the thoughts, the fears, the hopes, the dreams, the loves, the desires would be familiar to those of us today, hundreds of years and thousands of miles away.

Because THAT is what is of value – human lives and loves, human dreams and compassion, humans taking care of those that matter to them and reaching out a hand to those they don’t know, because even strangers are cousins when we realize we are a family of humanity.

Chimu reminds us of this connection – transcending place and time.

Great work in your own style.

Congratulations on tying for a 2d place win in the South American Still Life contest!

Congratulations, Steve, on your Win in the South American Still Life Contest for this beautiful painting! Voted.

Fantastic work Steve! The lighting is wonderful in this image.

wow, this is fabulous Steve l/f/fb/t/p

A truly magnificent piece of work. The detail, brush strokes and lighting are simply wonderful and a joy to look at.

Congratulations on your win in the still life contest—fabulous work!

To the buyer from Pennsylvania: Thank you very much for bringing the artwork Chimu into your life and home. May it convey a sense of the heart and soul of humanity — past, present, future — that, for the common everyday good-hearted peoples, has sought beauty and tranquility and meaning. Enjoy!

I extend a hearty thank you to the recent buyer from Virginia: may Chimu the artwork transport your heart and soul to a place of beauty and history and an appreciation for the simple things in life. Enjoy!

Great still life! I promoted in the 1000 views group. Congratulations on reaching over a thousand views!