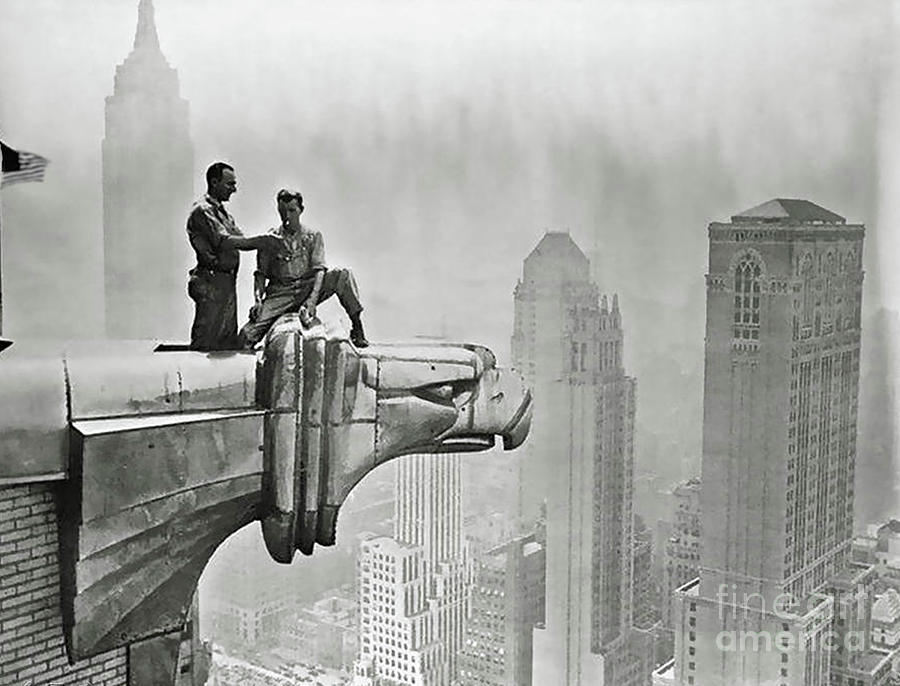 Chrysler Building gargoyle Eagle is a mixed media by Thomas Pollart which was uploaded on November 9th, 2017.

The Chrysler Building is an Art Deco-style skyscraper located on the East Side of Midtown Manhattan in New York City, at the intersection of 42nd Street and Lexington Avenue in the Turtle Bay neighborhood of Manhattan. At 1,046 feet (318.9 m), the structure was the world's tallest building for 11 months before it was surpassed by the Empire State Building in 1931. It is the tallest brick building in the world with a steel structure. As of 2015, the Chrysler is the fifth-tallest building in the city.

Originally a project of real estate developer and former New York State Senator William H. Reynolds, the structure was built by Walter Chrysler, the head of the Chrysler Corporation. The Chrysler Building's construction was characterized by a competition with 40 Wall Street and the Empire State Building to become the world's tallest building. The building served as the corporation's headquarters from 1930 until the mid-1950s. Although the building was built and designed specifically for the car manufacturer, the corporation did not pay for its construction and never owned it, as Walter P. Chrysler decided to pay for it himself, so that his children could inherit it.

Upon opening, there were mixed reviews of the building's design, ranging from inane and unoriginal to modernist and iconic. However, the Chrysler Building has slowly evolved into a paragon of the Art Deco architectural style, and in 2007, it was ranked ninth on the List of America's Favorite Architecture by the American Institute of Architects.

Congratulations on your sale, Thomas!

New Castle, DE, thank you for your purchase !!!

T.Y fond memories of my childhood there, and the awe I knew in 'the city', Carnegie Hall, too, especially.... fv....VIVA

Now I understand the source of your awesome creativity & generosity Viva A !