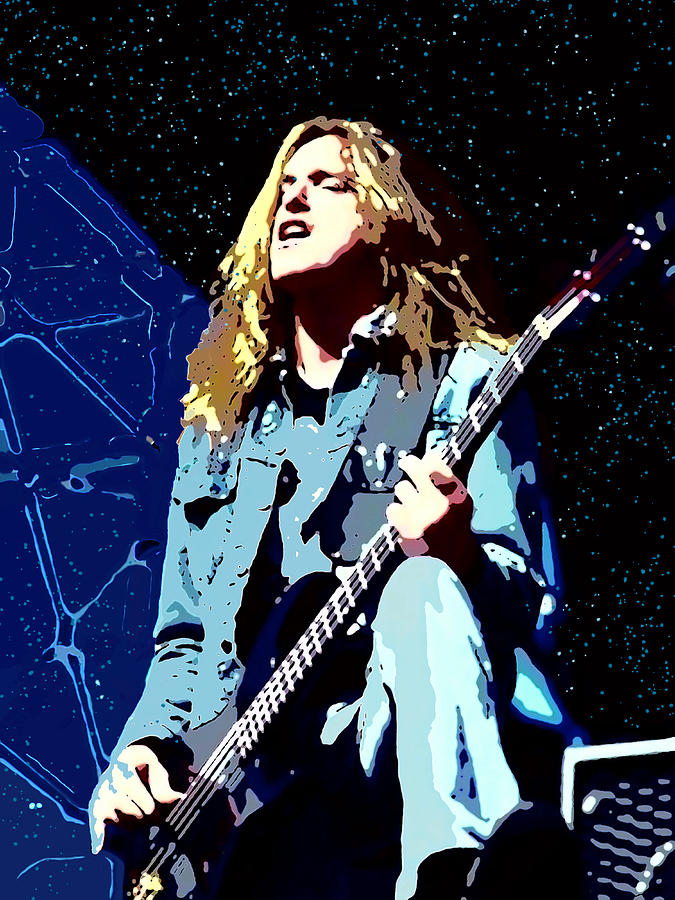 Cliff Burton of Metallica is a piece of digital artwork by Joy McKenzie which was uploaded on March 23rd, 2018.

Clifford Lee "Cliff" Burton (February 10, 1962 – September 27, 1986) was an American musician and songwriter, best known as the second bass guitarist for the American band Metallica from December 1982 until his death in September 1986.

Burton joined Metallica in 1982 and performed on the band's first three studio albums: Kill 'Em All, Ride the Lightning and Master of Puppets. He also received a posthumous writing credit for the song "To Live Is to Die" from the band's fourth studio album, ...And Justice for All.

On September 27, 1986, Burton died in a bus accident in Kronoberg County, a rural area of southern Sweden, as the band was touring in support of the Master of Puppets album. Burton was replaced by bassist Jason Newsted the following month. He was also posthumously inducted into the Rock and Roll Hall of Fame with Metallica on April 4, 2009. He was selected as the ninth greatest bassist of all time in an online reader poll organized by Rolling Stone magazine in 2011. (Text description released under the Creative Commons Attribution-Share-Alike License 3.0 via Wikipedia)
___________________________________

This photo of Cliff is used through a license from Creative Commons. It pictures Cliff with one leg up on a speaker, one of his famous stances. You see part of the scaffolding on the left. Maybe he was playing the chromatic intro to "For Whom the Bell Tolls". I restored the photo and applied various filters and other effects, to try and do justice to the memory of Cliff. Gone way too soon, Cliff still remains at the forefront of Metallica, often pictured in their media and on the giant screens on stage at their shows.

Thanks so much, Joe... I'm glad you're enjoying my rock stars :)

Thank you, Jimmy! Yes, he will always be missed.