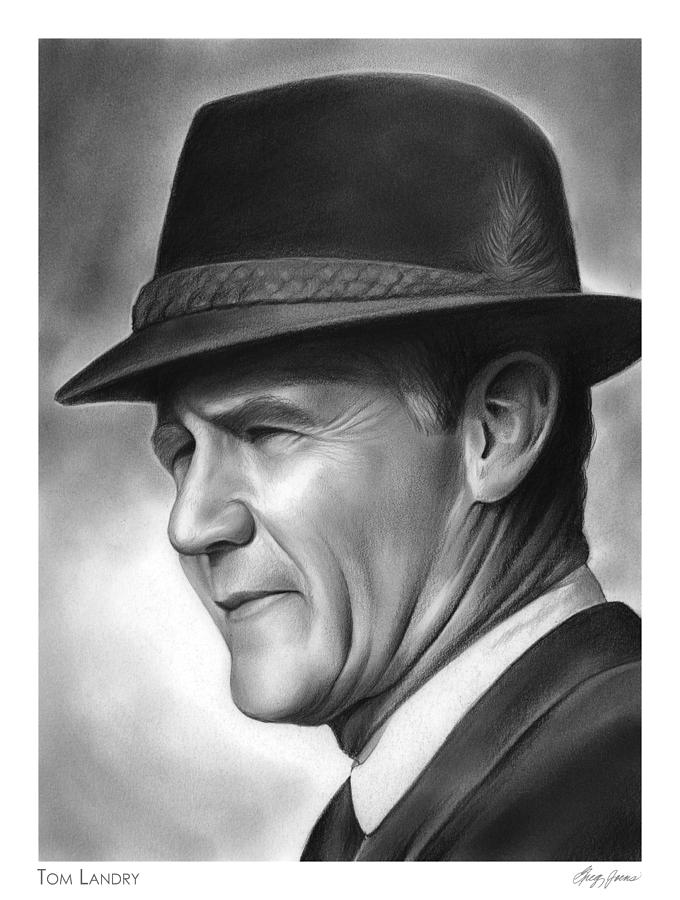 Coach Tom Landry is a drawing by Greg Joens which was uploaded on May 28th, 2015.

Thomas Wade "Tom" Landry (September 11, 1924 – February 12, 2000) was an American football player and coach. He is ranked as one of the greatest and most innovative coaches in National Football League (NFL) history, creating many new formations and methods. He invented the now popular 4–3 defense, and the "flex defense" system made famous by the "Doomsday Defense" squads he created during his 29-year tenure with the Dallas Cowboys. His 29 consecutive years as the coach of one team are an NFL record,

along with his 20 consecutive winning seasons.

Landry won two Super Bowl titles (VI, XII), five NFC titles, 13 Divisional titles, and compiled a 270-178-6 record, the third-most wins all-time for an NFL coach. His 20 career playoff victories are the second most of any coach in NFL history. He was named the NFL Coach of the Year in 1966 and the NFC Coach of the Year in 1975. His most impressive professional accomplishment is his 20 consecutive winning seasons (1966–1985), an NFL record that remains unbroken and unchallenged.

From 1966 to 1982 Dallas played in 12 NFL or NFC Championship games, a span of 17 years. More impressive is the Cowboys' appearance in 10 NFC Championship games in the 13-year span from 1970 to 1982. Leading the Cowboys to three Super Bowl appearances in four years between 1975 and 1978, and five in nine years between 1970 and 1978, and being on television more than any other NFL team is what spawned the title of "America's Team", a title Landry did not appreciate because he felt it would bring on extra motivation from the rest of the league to compete with the Cowboys.

Congratulations on your sale Greg!