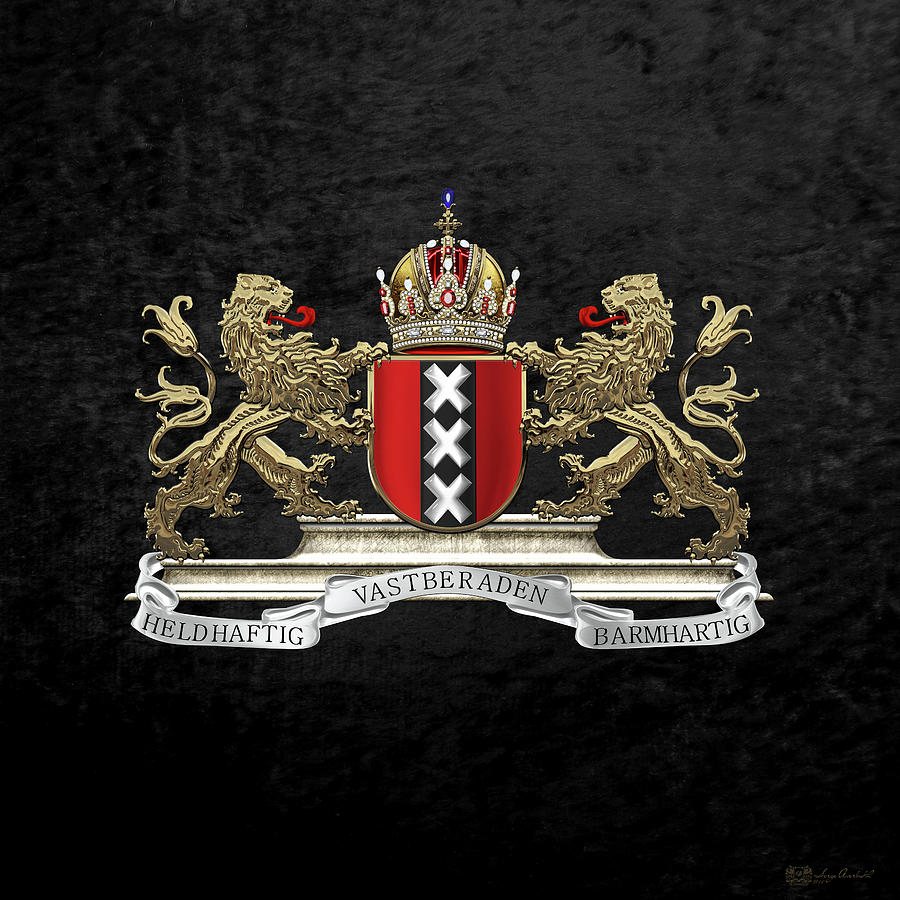 Coat Of Arms Of Amsterdam Over Black Velvet is a piece of digital artwork by Serge Averbukh which was uploaded on September 25th, 2016.

Coat Of Arms Of Amsterdam Over Black Velvet

Coat Of Arms Of Amsterdam Over Black Velvet

Introducing 'Cities of the World' series, part of the 'World Heraldry' collection by Serge Averbukh, showcasing stunning convergent media paintings of city coats of arms, emblems and flags. Here you will find pieces featuring Coat of arms of Amsterdam over Black Velvet.

Amsterdam is the capital and most populous municipality of the Kingdom of the Netherlands. Its status as the capital is mandated by the Constitution of the Netherlands, although it is not the seat of the government, which is The Hague. The city is located in the province of North Holland in the west of the country. The metropolitan area comprises much of the northern part of the Randstad, one of the larger conurbations in Europe, with a population of approximately 7 million.

Amsterdam's name derives from Amstelredamme, indicative of the city's origin as a dam of the river Amstel. Originating as a small fishing village in the late 12th century, Amsterdam became one of the most important ports in the world during the Dutch Golden Age (17th century), a result of its innovative developments in trade. During that time, the city was the leading centre for finance and diamonds. In the 19th and 20th centuries the city expanded, and many new neighbourhoods and suburbs were planned and built. The 17th-century canals of Amsterdam and the 19-20th century Defence Line of Amsterdam are on the UNESCO World Heritage List.
The coat of arms of Amsterdam is the official symbol of the city of Amsterdam. It consists of a red shield and a black pale with three silver Saint Andrew's Crosses, the Imperial Crown of Austria, two golden lions, and the motto of Amsterdam. Several heraldic elements have their basis in the history of Amsterdam. The crosses and the crown can be found as decorations on different locations in the city.
The flag of Amsterdam is the official flag for Amsterdam, the capital city of the Netherlands. The current design of the flag depicts three Saint Andrew's Crosses and is based on the escutcheon in the coat of arms of Amsterdam. The flag was adopted on February 5, 1975.