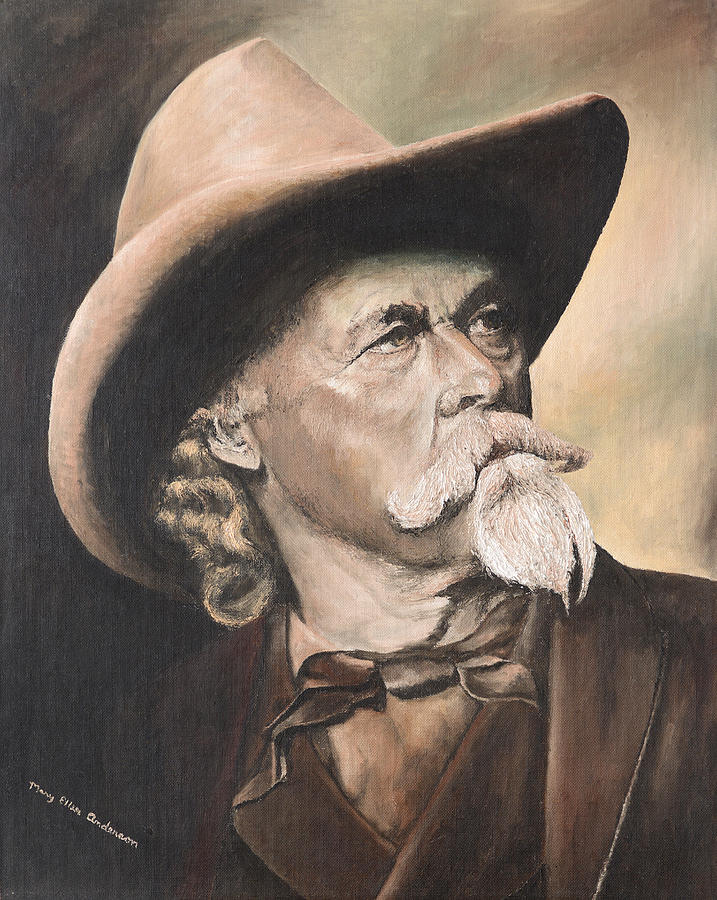 Cody - Western Gentleman is a painting by Mary Ellen Anderson which was uploaded on January 29th, 2013.

A monochrome rendering, of William Buffalo Bill Cody, conveys the vintage and historic feel of a by-gone period. The rough and weathered face and the... more

A monochrome rendering, of William "Buffalo Bill" Cody, conveys the vintage and historic feel of a by-gone period. The rough and weathered face and the strong steady gaze belie any hint of easy-living from the finery of his dress. Light illuminates a man of power and self-reliance, Cody was a decorated soldier in the American west, and a celebrated showman. His flamboyant character and heroic adventures made him a legend. Un-conflicted in his time; a man of the American Wild West.

This painting looks stunning in a den, or library. A rustic very warm elegance.


-------Wikipedia------
William Frederick "Buffalo Bill" Cody (February 26, 1846 - January 10, 1917) was an American soldier, bison hunter and showman. He was born in the Iowa Territory (now the U.S. state of Iowa), in Le Claire but lived several years in Canada before his family moved to the Kansas Territory. Buffalo Bill received the Medal of Honor in 1872 for service to the US Army as a scout. One of the most colorful figures of the American Old West, Buffalo Bill became famous for the shows he organized with cowboy themes, which he toured in Great Britain and Europe as well as the United States.
--------Artist--------
Mary Ellen Anderson is a contemporary American oil painter residing in Lawrence, Kansas USA. She is known for her oil paintings that blend ultra-realism and impressionism into a unique style that is reminiscent of Renaissance masters. Common themes are mid-west and western landscapes, portraits, and nature.

Thank you, to the buyer from Fallbrook, CA; much appreciation.

I don't remember seeing this, it is amazing. Im impressed!

This portrait is wonderful, m Mary! The viewer gts a real sense of his personality....so stoic! like

Awesome portrait. I feel as though I could reach out and shake his hand.

Thank you very much, John.

Very nice work. I especially like your use of shadow and light. Very antique feel to the portrait,

Wow Mary Ellen! This is amazing!

This Is An Awesome Portrait. FV

Me too, Kevin. I wanted him to be heroic.

Thanks John, very much appreciated.

This is really nice. As a native Iowan, I always feel a kinship with Cody.

Thank you Eric for featuring this in 'Drawings and Paintings'.

Thank you very much Alice.

Thank you Allen for featuring this in 'Famous Faces Portraits'.

Thank you very much Daniel, truly appreciate your support.

Stunning ! So many details!!! This fella reminds me of Buffalo Bill... Bravo! V

Thank you Will and Ylli.