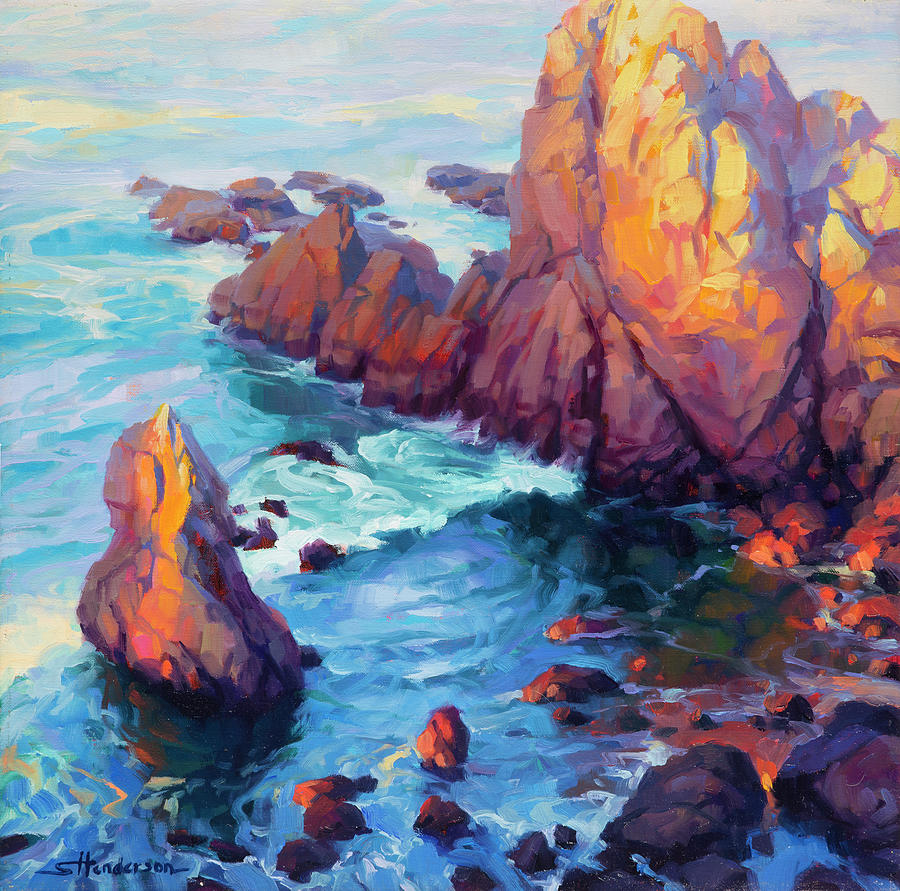 Convergence is a painting by Steve Henderson which was uploaded on March 17th, 2017.

A convergence is a gathering together, a location in the sea where currents and inflow meet. In the artwork, Convergence, this meeting of movement... more

A convergence is a gathering together, a location in the sea where currents and inflow meet. In the artwork, Convergence, this meeting of movement and water takes place among a series of dramatic rockwork, and the best place to view this phenomenon is from above.

One would not wish to be physically amidst such a convergence. The energy and flow and sheer strength of the water would knock one against and into the rocks – Nature’s power, while it is majestic and awe inspiring, is also something to treat with respect and circumspection.

Hence, the best place to view Convergence is from above – especially during high tide.

The coastal scene from which Convergence is drawn is along the Oregon Coast of the United States, an area of intense visual interest simply because there are so many outcrops of rocks in the midst of the sea. Depending upon the time, the season, and the tide, areas such as Convergence change in their appearance and attitude. There is a fascination in watching the water swirl and eddy about during the low tides, with tide pools uncovered that one does not see when the water is high.

During high tide, the fascination comes from the sheer force and impact of the water as it rushes in, hits the rocks, and casts spray into the air that is the ocean’s form of fireworks. On a sunny day, rays from the sun cast through the droplets, adding a shimmer and gleam to the display. The sound of the surf pounding against the rocks increases the sense of drama.

The Oregon Coast is a beautiful place, especially during the late summer and fall months when the blue skies of autumn glow against the colors of the sea and the coast. Convergence invites the viewer to stop at the edge of the cliff, view the sky, and marvel at the beauty of the show going on below.

Congratulations on your top finish in the Rocks and Minerals contest! voted

Another fantastic painting Steve! I have to wonder which ones hang on your walls?

Most paintings have hung on our walls for at least a few days to a few years as they flow through shows, galleries or to other people's homes.

Such a beautiful seascape with wonderful light!

To the buyer from Michigan: May this artwork remind you always of the many possibilities in store for those who see and learn and act. Where land meets sea a new marvelous world is created — a thin strip of something not fully ocean and not fully land, an area of change, dynamics. Enjoy the view! Enjoy the possibilities!

Congratulations on your amazing sale!

congratulations on your sale