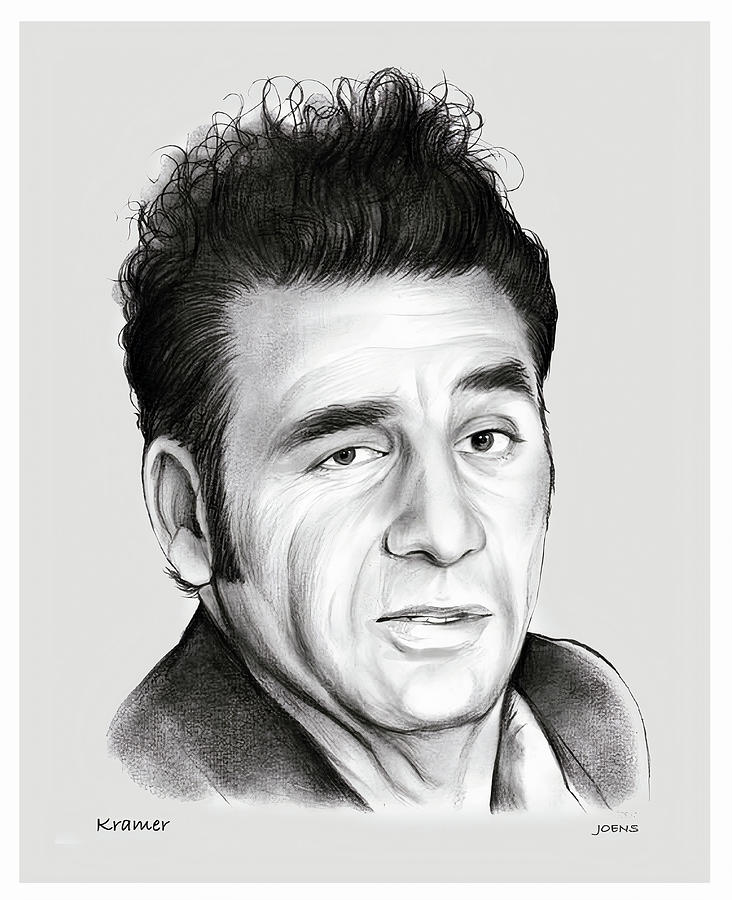 Cosmo is a drawing by Greg Joens which was uploaded on April 2nd, 2021.

Cosmo Kramer, usually referred to by his surname, is a fictional character on the American television sitcom Seinfeld (1989–1998), played by... more

Cosmo Kramer, usually referred to by his surname, is a fictional character on the American television sitcom Seinfeld (1989–1998), played by Michael Richards.

The character is loosely based on comedian Kenny Kramer, Larry David's ex-neighbor across the hall. Kramer is the friend and neighbor of main character Jerry, who resides in Apartment 5B, and is friends with George and Elaine. Of the series' four central characters, only Kramer has no visible means of support; what few jobs he holds seem to be nothing more than larks, although he never seems to be short of money.

A lovable rogue, his trademarks include his upright hairstyle and vintage wardrobe, whose combination led Elaine to characterize him as a "hipster doofus";[1] his taste in fresh fruit; love of occasional smoking, Cuban cigars in particular; bursts through Jerry's apartment door without even bothering to knock first; frequent pratfalls and penchant for nonsensical, percussive outbursts of noise to indicate skepticism, agreement, irritation and a variety of other feelings. He has been described as "an extraordinary cross between Eraserhead and Herman Munster".[2] Kramer appeared in all but two episodes: "The Chinese Restaurant" and "The Pen", in the second and third seasons, respectively.

In "The Seinfeld Chronicles", the pilot episode of Seinfeld, Kramer was originally called "Kessler" to prevent legal issues since it was based on Larry David's real-life next-door neighbor Kenny Kramer. Kenny apparently liked Seinfeld and permitted Larry David, who was the writer of Seinfeld from seasons 1 to 7, to use "Kramer" as Kessler's name. Beginning with the second episode of the show, "The Stake Out", the character's name was changed to Kramer.