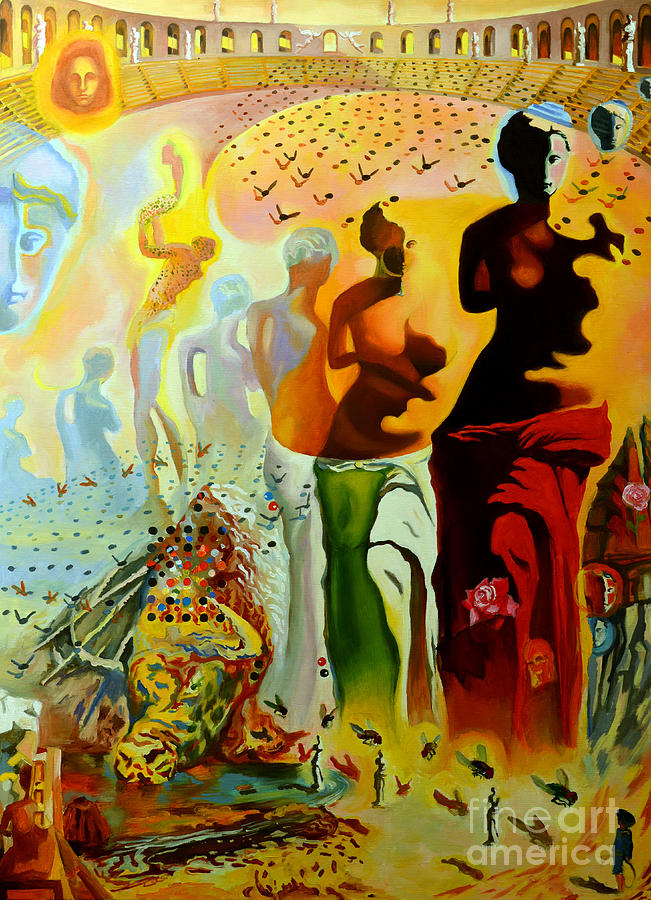 Dali Oil Painting Reproduction - The Hallucinogenic Toreador is a painting by Mona Edulesco which was uploaded on October 13th, 2012.

MY OIL PAINTING REPRODUCTION AFTER THE HALLUCINOGENIC TOREADOR BY SALVADOR DALI.... more

MY OIL PAINTING REPRODUCTION AFTER "THE HALLUCINOGENIC TOREADOR" BY SALVADOR DALI.
THIS WAS A COMMISSIONED PAINTING, OIL ON STRETCHED CANVAS, 55x75x2,5 CM (21,6x29,5x0,7 IN)
PRINTS AND CARDS ARE AVAILABLE FOR SALE.

Salvador Dali (May 11, 1904 - January 23, 1989) was a Spanish painter and is often known as the father of the Surrealist movement. After studying under several artists, Dali started developing his own style of painting. His view on the world and political beliefs greatly influenced his art. Most of his paintings fit into the Surrealist movement - simply meaning many of his paintings appear as if they took place in a dream. Details in the painting are exaggerated but appear in a more realistic environment.

THE HALLUCINOGENIC TOREADOR (1968-1970) is an oil painting, currently being exhibited at the Salvador Dali Museum in St. Petersburg, Florida. It stands 157in tall by 118in wide (nearly 13ft by 10ft, or for those who use the metric system, 398.8cm by 299.7cm). Salvador Dali painted it in 1970, following the canons of his particular interpretation of surrealist thought. In this piece, Dali transmits his wife's dislike for bullfighting. By combining symbolism with optical illusions and estranging yet familiar motifs, he creates his own visual language. His application of the paranoiac-critical method within this painting combines versatile images as an instructive example of his artistic creation.

Beautifully done!. You inspire me. I would love, if You could let me know what you think about my work. ;-)

“Art enables us to find ourselves and lose ourselves at the same time.” .. Congratulations on your recent sale of an amazing work.

Congratulations on the recent sale!!

Congratulations on your sale of this magnificent artwork! F

Congratulations on your sale today! L/F.

Great job on the sale!

Thank you everyone so much for your beautiful and thoughtful comments. Thank you also for your kind congrats on my sales. I appreciate a lot! ❤

lovely use of colour congrats