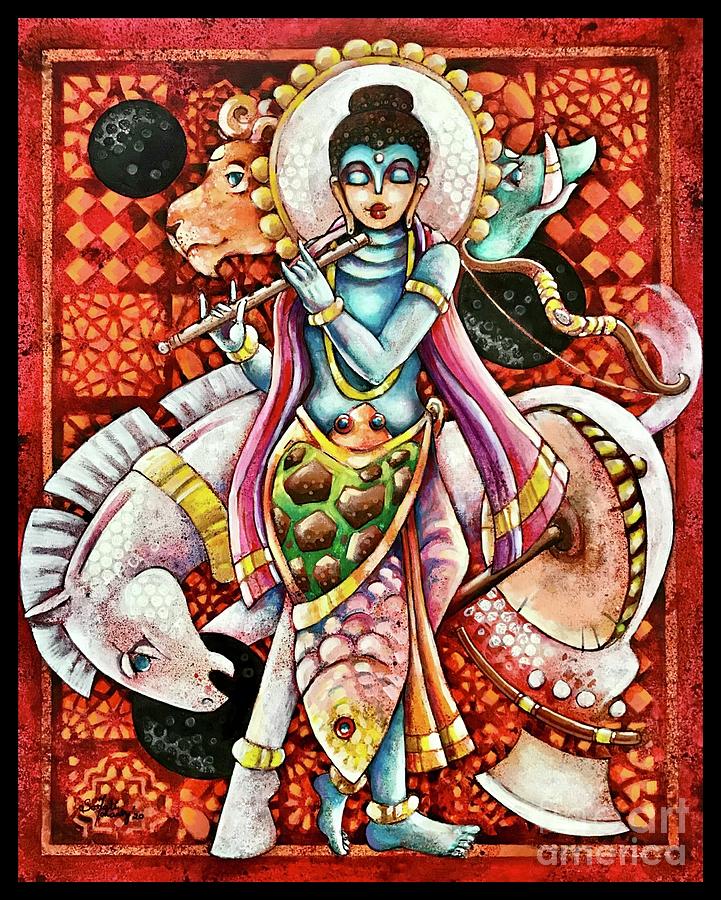 Dashavatara 1 is a painting by Sonali Mohanty which was uploaded on November 16th, 2020.

30”x24”
Acrylic/mixed Media in stretched canvas with frame
2020
.
.
Our Indian mythology is full of interesting tales that teach us about different times in a very unique way. One of them is Dashavatara which literally mean 10 incarnations. It refers to the 10 primary avatars of Vishnu. Vishnu is said to descend in form of an avatar to restore cosmic order. For each of these avatars there are stories to justify the need for these incarnations and how they helped get the world in order.
.
The impressive thing is that the order of the ancient concept of Dashavatara has been interpreted to be reflective of modern Darwinian evolution. It goes from simple life-forms to more complex life-forms, and can be considered as a reflection, or a foreshadowing, of the modern theory of evolution. It is almost mind boggling to imagine that these ancient scholars knew about evolution before it even became an accepted concept.
.
The avatars have covered everything from the water dwelling fish, to the amphibian, half man half beast, the hunter, the first small human form, the warrior, the civilized man, the politician, the one in need of inner happiness and finally the end which promises to usher in the Golden age of human civilization.
.
In my paintings I have tried to get all the forms into one space.
.
1. Matsya, the fish
2. Kurma, the giant tortoise
3. Varaha, the boar
4. Narasimha, the half man-half lion
5. Vamana, the dwarf …. represented by the umbrella
6. Parashurama, the warrior with the axe
7. Rama, the prince and king of Ayodhya …. represented by his famous bow
8. Krishna, the flute playing, playful deity who is universally loved
9. Buddha
10. Kalki, the name literally means "The Annihilator of Ignorance.” It is the final incarnation of Vishnu who comes at the end of the world on his white horse, Devadutt