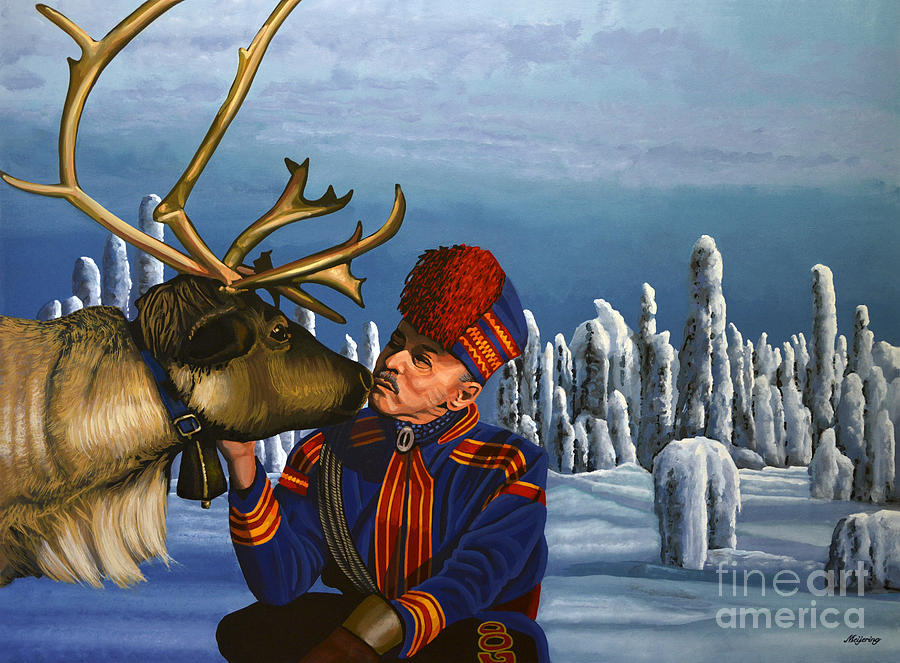 Deer Friends Of Finland is a painting by Paul Meijering which was uploaded on July 8th, 2015.

Realistic acrylic painting of a Sami man together with his reindeer in a winter wonderland covered with crown snow trees in Lapland up north in... more

Realistic acrylic painting of a Sami man together with his reindeer in a winter wonderland covered with crown snow trees in Lapland up north in Finland, painted by the Dutch fine artist Paul Meijering - the Original painting is 90 x 120 cm and for sale

The Sami people (also S￿ or Saami), traditionally known in English as Lapps or Laplanders, are an indigenous Finno-Ugric people inhabiting the Arctic area of S￿i, which today encompasses parts of far northern Norway, Sweden, Finland, the Kola Peninsula of Russia, and the border area between south and middle Sweden and Norway. The Sami are the only indigenous people of Scandinavia recognized and protected under the international conventions of indigenous peoples, and are hence the northernmost indigenous people of Europe.
Finland, officially the Republic of Finland, is a Nordic country in Northern Europe bordered by Sweden to the west, Norway to the north, and Russia to the east; Estonia lies to the south across the Gulf of Finland. Finland is part of the geographic region of Fennoscandia, which also includes Scandinavia and parts of Russia.
The reindeer (Rangifer tarandus), also known as caribou in North America, is a species of deer with circumpolar distribution, native to Arctic, Subarctic, tundra, boreal and mountainous regions of northern Europe, Siberia, and North America.

Voted for this one too :)

Thank you, Johanna, for your vote!! Much appreciated!;-))

Great artistic work! I live in Finland so the name cought my eye :) Fabulous work! LF

Hi Johanna! Thank you very much, for your compliment and kind words!! Lovely comment!;-))

Thank so much, Debbie, for your kind words and congrats!!;-))

Congratulations your beautiful artwork is being featured in The World We See Group:-)

Thank you so very much, Robyn, for your compliment, support and the feature in your amazing group!!;-))

Thank you so much, Kristina!;-)

Congratulations for the feature of your artwork on the homepage of Greeting Cards For All Occasions 7-9-15!

Thank you so very much, Jean, for your support and the feature in your wonderful group!!;-))

Thank you so very much, David, for your support and the feature in your creative group!!;-))