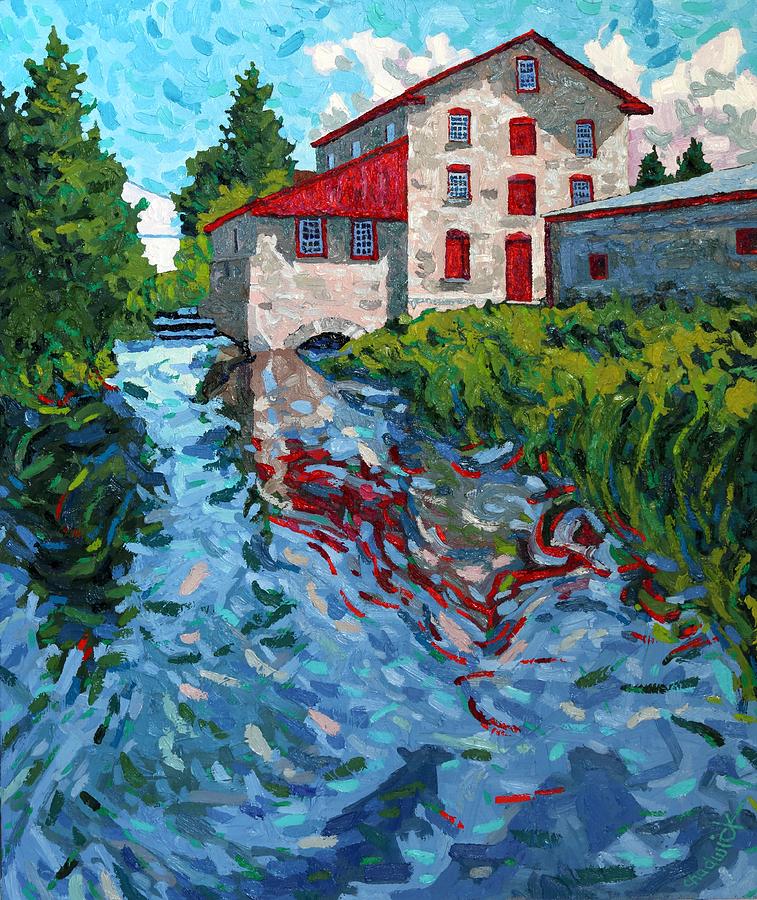 Delta Morning is a painting by Phil Chadwick which was uploaded on August 18th, 2015.

The paint is on the canvas - very thick - several millimetres in places. The painting stayed on the easel through the hottest part of July when the... more

The paint is on the canvas - very thick - several millimetres in places. The painting stayed on the easel through the hottest part of July when the heat and the bugs pushed me into the studio.
The Old Stone Mill at Delta was built in 1810 by William Jones and is one of the earliest surviving, fully automatic, grist mills of Upper Canada. In 1817 the mill was described as�"unquestionably the best building of the kind in Upper Canada".
In 1963 the last owner of the Mill, Hastings Steele, deeded the Old Stone Mill to a group of four people in trust, for the sum of one dollar. Mr. Steele's prime concern was that the Mill should be preserved and would in time become a museum of milling technology. These four people founded the The Delta Mill Society later the same year and in 1972 the Society was incorporated as a Non-profit Corporation in the Province of Ontario. It was the dawn of a new era creating tourism jobs that entertain and educate. The black smith fires and forge were running again beside the Delta Mill.
In 1973, the Old Stone Mill was designated a National Historic Site because of its early use of the automatic milling system and its unique Georgian architecture. It is the only stone gristmill in Canada to receive the status of National Historic Site. With this new title, the Delta Mill Society worked with the Ontario Ministry of Culture and other provincial and federal agencies to fund a building stabilization project in 1973-4. This project included general masonry repair, re-roofing with new cedar shakes, jacking of floors to level, replacement of windows, sash and glazing, and structural framing stabilization. The work done in 1974 was not extensive, but did secure the building sufficiently for the Delta Mill Society to open the building as a museum.�

The painting is almost a sculpture in oil... really thick :>) Thank you so much!