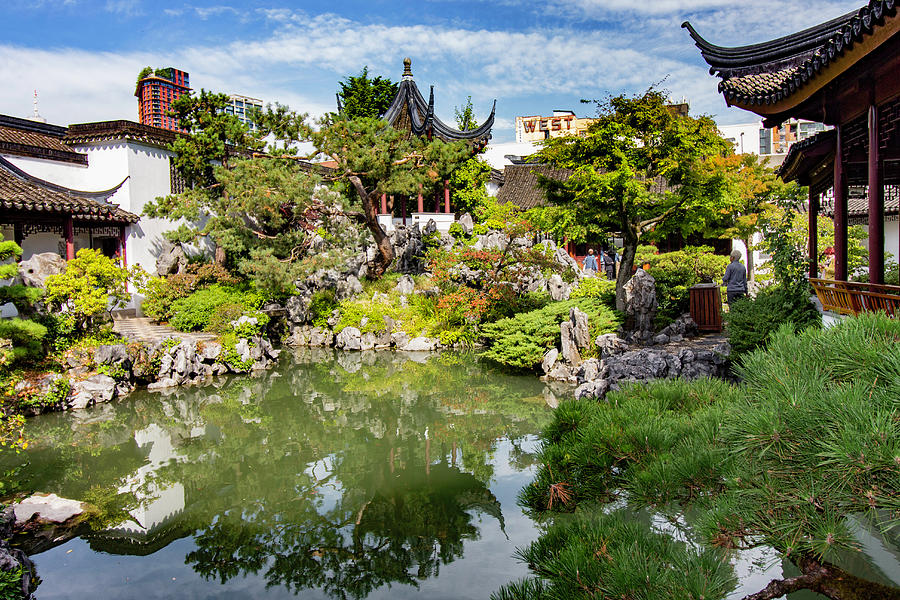 Dr. Sun Yat-Sen Classical Chinese Garden, Vancouver, Canada is a photograph by Venetia Featherstone-Witty which was uploaded on July 10th, 2020.

The Dr. Sun Yat-Sen Classical Chinese Garden is the first Chinese or scholars garden built in 1985–1986. outside of China, and is located in... more

The Dr. Sun Yat-Sen Classical Chinese Garden is the first Chinese or "scholars" garden built in 1985–1986. outside of China, and is located in Chinatown in Vancouver, British Columbia, Canada. It is located at 578 Carrall Street and consists of a freely accessible public park and a garden. The mandate of the garden is to "maintain and enhance the bridge of understanding between Chinese and western cultures, promote Chinese culture generally and be an integral part of the local community."

Classical Chinese gardens employ philosophical principles of Feng shui and Taoism, striving to achieve harmony and a balance of opposites. Craggy rocks, for example, are juxtaposed against delicate foliage. Water is also an important element of the garden, and the large pond offers stillness, sound, a reflection of the sky, and helps to unify the other elements. Fish and turtles live in the garden and also serve a symbolic purpose. Bats, dragons, and phoenixes are represented in objects throughout the garden. Numerous large rocks are strategically placed and are intended to represent mountains concealing and revealing park elements.

The garden is named in honour of Dr. Sun Yat-Sen, a nationalist leader who is considered the "father of modern China." The attribution is not arbitrary, as it emphasizes his connection with Vancouver. While traveling the world to raise awareness of, and funding for, the Chinese nationalist movement, Sun Yat-Sen stayed in Vancouver on three occasions for extended periods. At the time, there was a significant presence of Chinese nationalists in British Columbia, who helped finance the Xinhai Revolution that overthrew the Qing Dynasty in 1911. Sun Yat Sen subsequently became the first president of the Republic of China.
FEATURED 7/12/20 in "New FAA Uploads'
FEATURED 7/17/20 in "Awesome Asia"
FEATURED 7/18/20 in "Travel Art"
FEATURED 7/18/20 in "Your Very Best Photography"
FEATURED 7/19/20 in "Canada"
FEATURED 7/25/20 in "Out of the Ordinary"
FEATURED 7/30/20 in "No Place Like Home"
FEATURED 7/30/20 in "Images That Excite You"

Wonderful capture! Congratulations on the features.

Thank you very much for your kind message!

Thank you very much for the feature, John!

Thank you very much, Andrew!

Thank you very much for the feature, Lyric!

Congratulations - Your beautiful artwork has been featured in the "Travel Art" gallery at Fine Art America! For further promotion, you can post it to the specific Travel Destinations galleries, our Facebook group and our Pinterest board - All the links are provided on our group's homepage.

Thank you very much for the feature, Tatiana!

Thank you very much Stephen!