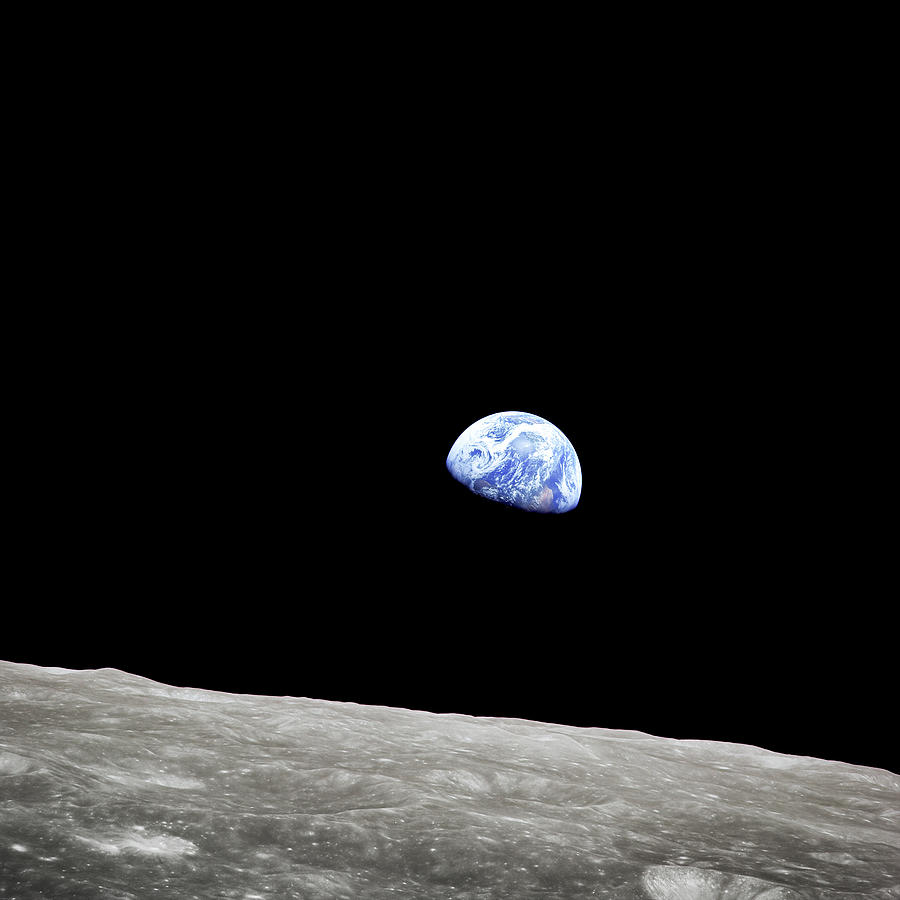 Earthrise - The Original Apollo 8 Color Photograph is a photograph by Eric Glaser which was uploaded on February 28th, 2016.

Earthrise is a photograph of the Earth taken by astronaut William Anders in 1968, during... more

"Earthrise" is a photograph of the Earth taken by astronaut William Anders in 1968, during the Apollo 8 mission. Nature photographer Galen Rowell declared it "the most influential environmental photograph ever taken." This had been preceded by the crude 1966 black-and-white raster earthrise image taken by the Lunar Orbiter 1 robotic probe.

"Earthrise" is the name given to NASA image AS8-14-2383, taken by astronaut William Anders during the Apollo 8 mission, the first manned voyage to orbit the Moon.

Initially, before Anders found a suitable 70 mm color film, mission commander Frank Borman took a black-and-white photograph of the scene, with the Earth's terminator touching the horizon. The land mass position and cloud patterns in this image are the same as those of the color photograph entitled "Earthrise."

The photograph was taken from lunar orbit on December 24, 1968, with a highly modified Hasselblad 500 EL with an electric drive. The camera had a simple sighting ring rather than the standard reflex viewfinder and was loaded with a 70 mm film magazine containing custom Ektachrome film developed by Kodak. An audio recording of the event is available with transcription which allows the event to be followed closely - excerpt:

Anders: Oh my God! Look at that picture over there! There's the Earth coming up. Wow, is that pretty.

Borman: Hey, don't take that, it's not scheduled. (joking)
Anders: (laughs) You got a color film, Jim?
Hand me that roll of color quick, would you...
Lovell: Oh man, that's great!

There were many images taken at that point. The mission audio tape establishes several photographs were taken, on Borman's orders, with the enthusiastic concurrence of Lovell and Anders. Anders took the first color shot, then Lovell who notes the setting (1/250th of a second at f/11), followed by Anders with another two at varying exposures.

A nearly full-page black and white reproduction of Borman's image may be viewed on page 164 of his 1988 autobiography, captioned, "One of the most famous pictures in photographic history - taken after I grabbed the camera away from Bill Anders." Borman was the mission commander and notes that this is the image "the Postal Service used on a stamp, and few photographs have been more frequently reproduced. The photograph reproduced in the Frank Borman autobiography is not the same image as the Anders photograph; aside from the orientation, the cloud patterns differ.

The stamp issue reproduces the cloud, color, and crater patterns of the Anders picture. Anders is described (pg. 193) by Borman as holding "a masters degree in nuclear engineering;" Anders was thus tasked as "the scientific crew member ... also performing the photography duties that would be so important to the Apollo crew who actually landed on the Moon."

In Life 's 100 Photographs that Changed the World, wilderness photographer Galen Rowell called "Earthrise" "the most influential environmental photograph ever taken." Another author called its appearance the beginning of the environmental movement.

In 1969, the U.S. Postal Service issued a stamp (Scott# 1371) commemorating the Apollo 8 flight around the Moon. The stamp featured a detail (in color) of the "Earthrise" photograph, and the words, "In the beginning God...," recalling the Apollo 8 Genesis reading.

Potential earthrises as seen from the Moon's surface:

An earthrise that might be witnessed from the surface of the Moon would be quite unlike moonrises on Earth. Because the Moon is tidally locked with the Earth, one side of the Moon always faces toward Earth. Interpretation of this fact would lead one to believe that the Earth's position is fixed on the lunar sky and no earthrises can occur; however, the Moon librates slightly, which causes the Earth to draw a Lissajous figure on the sky. This figure fits inside a rectangle 15 degrees 48' wide and 13 degrees 20' high (in angular dimensions), while the angular diameter of the Earth as seen from Moon is only about 2 degrees. This means that earthrises are visible near the edge of the Earth-observable surface of the Moon (about 20% of the surface). Since a full libration cycle takes about 27 days, earthrises are very slow, and it takes about 48 hours for Earth to clear its diameter. During the course of the month-long lunar orbit, an observer would additionally witness a succession of "Earth phases," much like the lunar phases seen from Earth. That is what accounts for the half-illuminated globe seen in the photograph.

Thanks very much, Wayne!

Thanks very much, Irina!

Art provides an opportunity for kaleidoscopic thinking. Each time we shift the lens of our perceptions, we gain new perspectives — and new opportunities for innovation.💖 CONGRATULATIONS ON YOUR RECENT SALE OF A WONDERFUL WORK!

Eric, congratulations on your sale of this amazing photo!

Art provides an opportunity for kaleidoscopic thinking. Each time we shift the lens of our perceptions, we gain new perspectives — and new opportunities for innovation.❣️ CONGRATULATIONS ON YOUR RECENT SALE OF A WONDERFUL WORK!

What a great share of this earth from a different perspective Eric. F/L.

Thanks very much, Randy!

Thanks very much, Julia!

Thank you very much, Linda!

Congratulations on your successful art piece and your sale!

Congratulations on your sale Eric!

Thanks very much, Kathy!

Thanks very much, Kathy!

Thanks very much, Gary!

Thanks very much, Gary!

Art is unquestionably one of the purest and highest elements in human happiness. It trains the mind through the eye, and the eye through the mind. As the sun colours flowers, so does art colour life. -- Congratulations on your recent sale of this amazing Work!

Thanks very much, Gull!