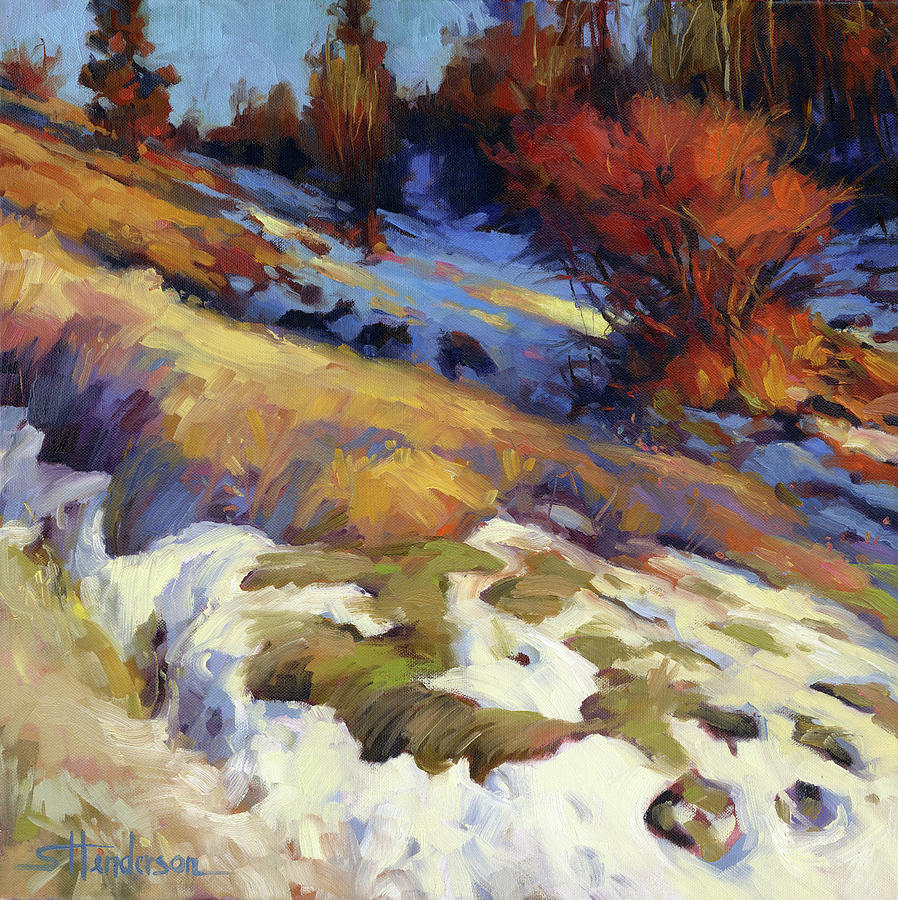 Emergence is a painting by Steve Henderson which was uploaded on March 20th, 2017.

When something emerges from its background, it was always there, but perhaps we didn’t see it because other aspects – more in the foreground –... more

When something emerges from its background, it was always there, but perhaps we didn’t see it because other aspects – more in the foreground – caught our attention.

The landscape artwork, Emergence, captures such a time and event. As we stand there, outside the painting and looking into the sloping country hillsides, we feel the coolness of the air and the possible breeze blowing past. Is this late autumn, and an early snow has covered the bushes? The redness of the foliage makes us wonder.

Or is this the middle of a winter that isn’t particularly harsh?

Or, given the title of the piece, is this early spring, a time in which the sunlight grows stronger and is able to melt the snow that has blanketed the landscape throughout the winter? Emergence, then, is that of spring, coming forth in its season, brushing aside the cold and wet and bleakness of winter. The red hues of the foliage is that left over from autumn, and as spring comes forth more strongly, the new leaves of new growth will bud and burst forth, causing those hanging on from autumn to drop to the ground below.

Emergence is a reminder that time and seasons move on, and regardless of where we are in our life – and sometimes it feels like we are stuck in the midst of winter – the snow that blankets the landscape will not always be there. Seasons follow seasons, and in areas where spring has a definite presence, it will make that presence known.

And though the snow does its best to hold onto its grip, it really is no match for the sunlight and longer days, warming the ground and the atmosphere in preparation for the new, exuberant life of spring. In a short time, the white snow will be gone, and the golden grass and red foliage replaced by green.

(The landscape painted in Emergence is from Eastern Washington, in the USA. It captures a country walk in Columbia County, Washington.)

Steve, Congrats on your sale

BLESSINGS on your sale

Congrats on your beautiful artwork and sale!!

You are so talented! Love all of your paintings I've seen!

Such a beautiful painting of the beginning Spring shining bright! LFP

Steve, as always, this is wonderful! FLTw

A beautiful landscape in an unusual perspective that arouses curiosity, we notice the spreads of snow as well as the bright colors of late autumn! BIA l/f/tw/pin