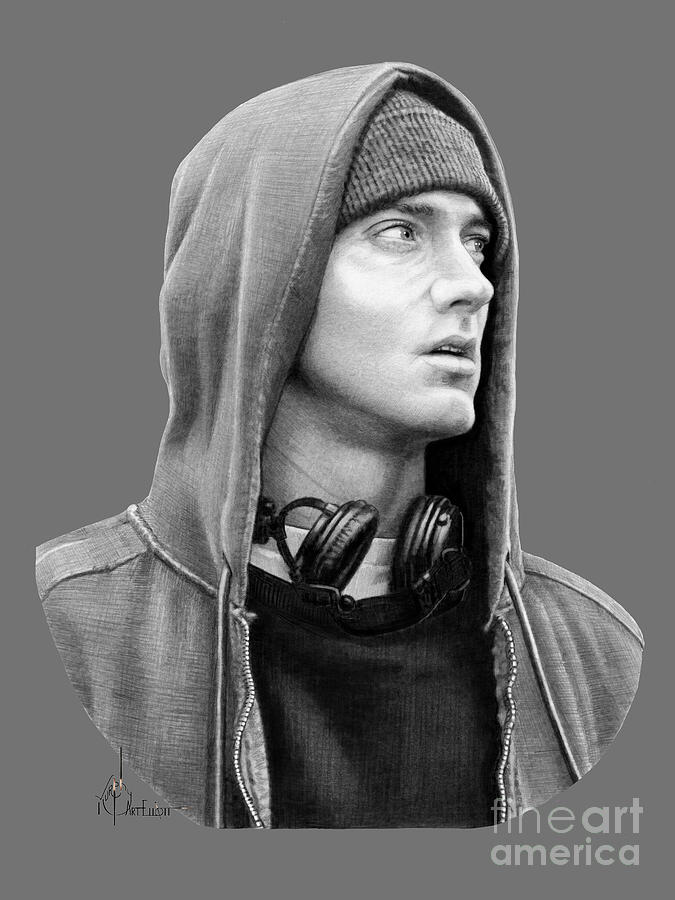 Eminem Marshall Mathers drawing is a drawing by Murphy Art Elliott which was uploaded on August 30th, 2019.

A pencil drawing of Marshall Mathers- Eminem by Murphy Elliott
Marshall Bruce Mathers III (born October 17, 1972), known professionally as Eminem (/ˌɛmɪˈnɛm/; often stylized as EMINƎM), is an American rapper, songwriter, record producer, record executive, film producer, and actor. He is consistently cited as one of the greatest and most influential rappers of all time and was labeled the "King of Hip Hop" by Rolling Stone magazine.[2][3] In addition to his solo career, Eminem was a member of the hip hop group D12. He is also known for his collaborations with fellow Detroit-based rapper Royce da 5'9"; the two are collectively known as Bad Meets Evil.

After his debut album Infinite (1996) and the extended play Slim Shady EP (1997), Eminem signed with Dr. Dre's Aftermath Entertainment and subsequently achieved mainstream popularity in 1999 with The Slim Shady LP, which earned him his first Grammy Award for Best Rap Album.[4] His next two releases, 2000's The Marshall Mathers LP and 2002's The Eminem Show, were worldwide successes, with each being certified diamond in U.S. sales and both winning Best Rap Album Grammy Awards—making Eminem the first artist to win the award for three consecutive LPs. They were followed by Encore in 2004, which was another commercial success, but did not receive the amount of critical success his previous albums had received. Eminem went on hiatus after touring in 2005 partly due to a prescription drug addiction.[5] He released Relapse in 2009 and Recovery in 2010. Both won Grammy Awards for Best Rap Album and Recovery was the best-selling album of 2010 worldwide, the second time he had the international best-selling album of the year (after The Eminem Show). Eminem's eighth album, 2013's The Marshall Mathers LP 2, won two Grammy Awards, including Best Rap Album; it expanded his record for the most wins in the category.[4][6] These were followed by 2017's Revival and 2018's Kamikaze,[7] the latter being the best-selling hip hop album of 2018.

You are an artist beyond compare. V/L

Thank you very much for the kind words.

Wow, you are REALLY good!

Congratulation on your sale!

Congratulations!! This stunning Black and White image has been selected to be featured for the week in the "Creative Black and White Fine Art Photographs" Group’s Home Page!! You are welcome to add a preview of this featured image to the group’s discussion post titled “2019 October: Stunning Group Featured Images and Feature Thank-you’s” for a permanent display within the group, to share this achievement with others. You may also share your featured image to our group Facebook page: https://www.facebook.com/groups/2428820430682266/ Thank you for your group participation! (October 3, 2019)