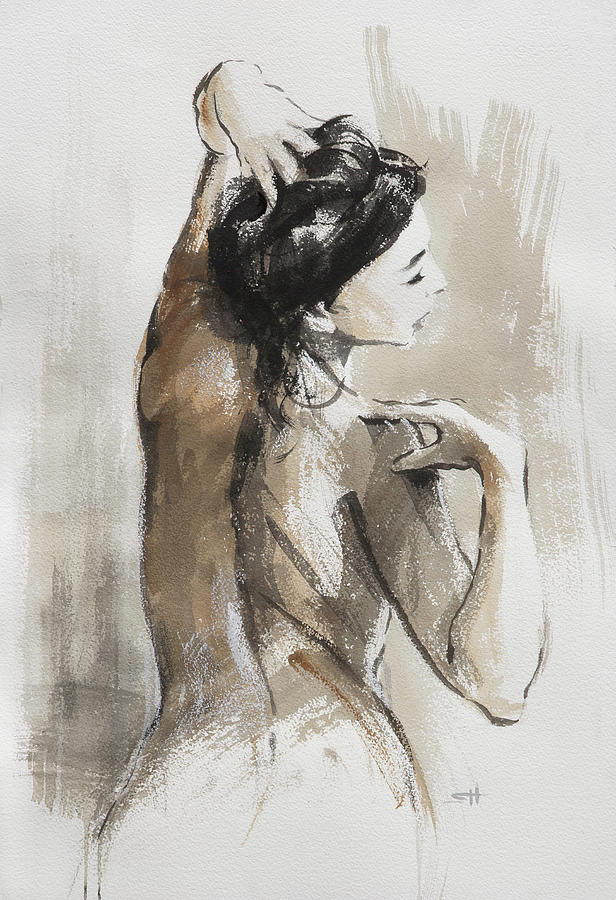 Expression is a painting by Steve Henderson which was uploaded on March 29th, 2017.

Some people get really funny about nude art.

Now obviously, the medium is one that can go in all directions, from tasteful to tasteless, and... more

Some people get really funny about nude art.

Now obviously, the medium is one that can go in all directions, from tasteful to tasteless, and to a certain degree, where the artwork lies on this continuum is a matter of personal taste – although the tasteless aspect is relatively obvious to those who maintain a normal, healthy sense of humanity and dignity toward such.

But in the area of tasteful, nudity in art celebrates the beauty of the human form, the curves and lines and angles and gentle swoops of the human figure, unencumbered by clothing and cloth and fabric, hiding the figure beneath.

The artwork, Expression, celebrates the curve and movement of the female figure, a favorite subject of artists through the ages and within many cultures. There is a sense of dance, of fluidity of motion within the woman’s arms and back, and the expression on her face is that of contented satisfaction in her youth, her energy, her suppleness and ability to move without pain or stiffness.

To a certain extent, the woman in Expression is ageless – she could be very young, but she could also be older than we think, a seasoned woman who is no longer a twenty-something, who through dance and movement and joy and faith and enthusiasm and grace maintains the suppleness of body and form, the suppleness that we traditionally associate with youth, because so many people in the U.S. culture lose this – not just the physical suppleness but the emotional one – well before the years of their life demand their toll.

Expression reminds us to take joy in our lives, to be in wonder at the movement of our bodies, to express ourselves not only through our words but through our actions – to walk with the walk with a dancer no matter how many left feet we fear that we have.

(Expression is complemented by the artworks Bathed in Light, After the Bath, Before the Bath, and Introspection, also by Steve Henderson and on this site.)

Steve, Congrats on your sale

BLESSINGS on your sale

Congratulations, Steve, on your wonderful sale!

Congrats on the nice sale!! Fav

Lovely - congrats on your sale!