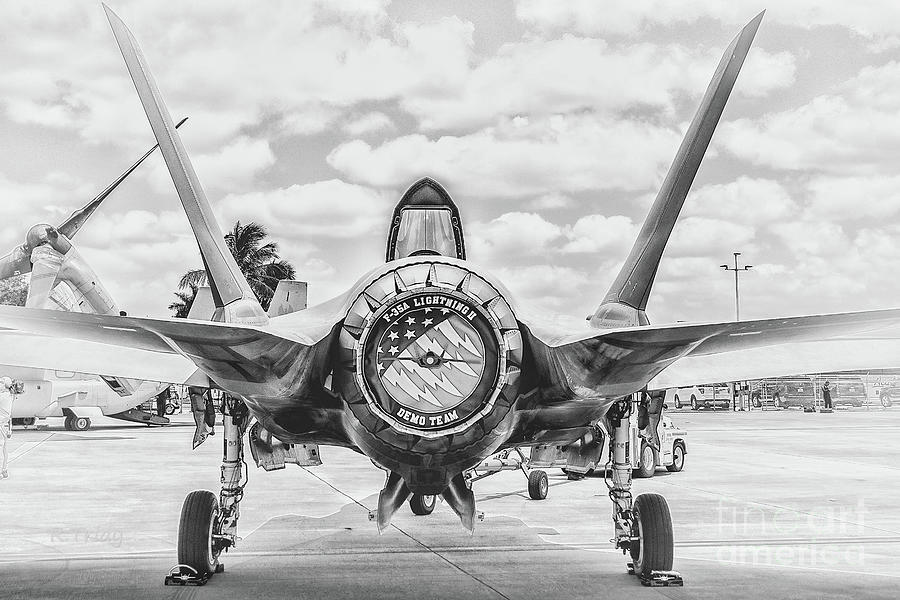 F-35 Lightning Rear Stance is a photograph by Rene Triay Photography which was uploaded on September 25th, 2020.

The F-35 descends from the X-35, the winning design of the Joint Strike Fighter (JSF) program. An aerospace industry team led by Lockheed Martin designed and manufactures it. Other major F-35 industry partners include Northrop Grumman, Pratt & Whitney, and BAE Systems. The F-35 first flew on 15 December 2006. The United States plans to buy 2,663 aircraft. Its variants are to provide the bulk of the crewed tactical airpower of the U.S. Air Force, Navy, and Marine Corps over the coming decades. Deliveries of the F-35 for the U.S. military are scheduled until 2037[12] with a projected service life up to 2070.[13]

The United States principally funds the F-35 JSF development, with additional funding from partners. The partner nations are either NATO members or close U.S. allies. The United Kingdom, Italy, Australia, Canada, Norway, Denmark, the Netherlands, and Turkey are part of the active development program;[14][15] several additional countries have ordered, or are considering ordering, the F-35. Turkey, as an industrial partner, is the sole source supplier for several parts used in the F-35: Vice Admiral Mat Winter, F-35 programme director, told Janes reporters in October 2018 that Turkey's industrial base "provides multiple parts on every F-35", including US F-35s.[16][17]

As the largest and most expensive military program, the F-35 is the subject of much scrutiny and criticism in the U.S. and in other countries.[18] In 2013 and 2014, critics argued that the plane was "plagued with design flaws", with many blaming the procurement process in which Lockheed was allowed "to design, test, and produce the F-35 all at the same time, instead of… [identifying and fixing] defects before firing up its production line".[18] By 2014, the program was "$163 billion over budget [and] seven years behind schedule".[19] Critics also contend that the program's high sunk costs and political momentum make it "too big to kill".[20]

In 2018, the F-35 was used in combat for the first time, when the Israeli Air Force carried out the design's first operational airstrikes on two different battlefronts.[

Congratulations! Your outstanding artwork has been chosen as a FEATURE in the “The Gray Scale Outdoors” group on Fine Art America — You are invited to post your featured image to the featured image discussion thread as a permanent place to continue to get exposure even after the image is no longer on the Home Page.

Thank you Allan for your wonderful comment. It's always an honor and great pleasure to be featured in your wonderful Fine Art America Group "The Gray Scale Outdoors!"

Thank you John for your wonderful comment. It's always an honor and great pleasure to be featured in your wonderful Fine Art America Group "Images That Excite You!"