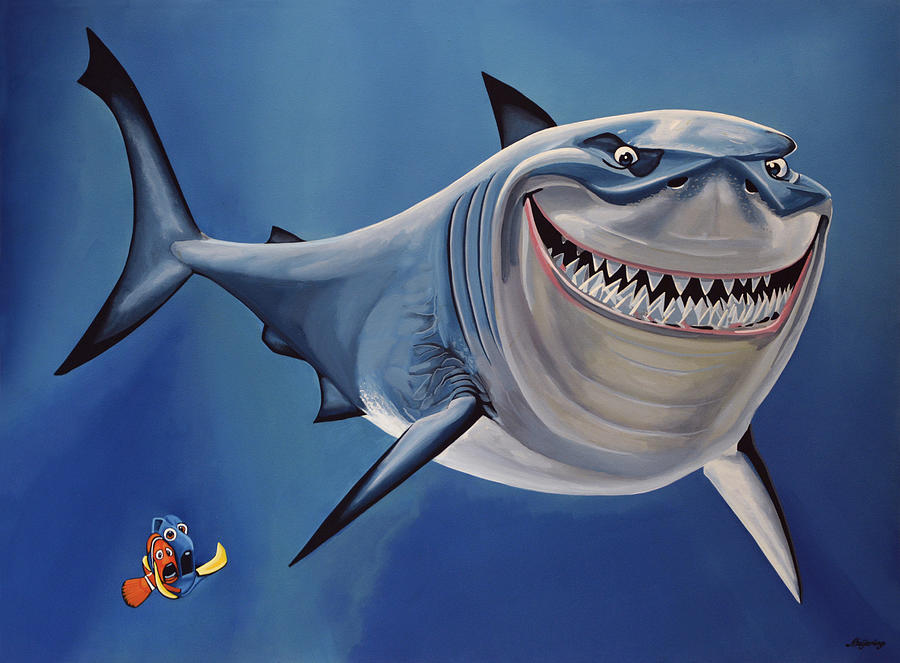 Finding Nemo Painting is a painting by Paul Meijering which was uploaded on March 29th, 2013.

Finding Nemo is a 2003 American computer-animated comedy-drama adventure film produced by Pixar Animation Studios and released by Walt Disney Pictures. It was written and directed by Andrew Stanton with co-direction by Lee Unkrich, and stars the voices of Albert Brooks, Ellen DeGeneres, Alexander Gould, and Willem Dafoe. It tells the story of the overprotective Ocellaris clownfish named Marlin who, along with a regal blue tang named Dory, searches for his abducted son Nemo all the way to Sydney Harbour. Along the way, Marlin learns to take risks and comes to terms with Nemo taking care of himself.
Finding Nemo was released on May 30, 2003, and has received universal critical acclaim since then. The film won the Academy Award for Best Animated Feature, and was nominated in three more categories, including Best Original Screenplay. Finding Nemo became the highest-grossing animated film at the time and was the second highest-grossing film of 2003, earning a total of $871 million worldwide by the end of its initial theatrical run.
The film is the best-selling DVD title of all time, with over 40 million copies sold as of 2006, and was the highest-grossing G-rated film of all time before Pixar's own Toy Story 3 overtook it. The film was re-released in 3D in 2012. In 2008, the American Film Institute named it the 10th greatest animated film ever made as part of their 10 Top 10 lists. A sequel, Finding Dory, was released on June 17, 2016 in the United States.

Congratulations!! This stunning image has been selected to be featured for the week in the “Art for Ever with You” Group Home Page. You are welcome to add a preview of this featured image to the group’s discussion post titled “2019 September: Stunning Group Featured Images and Thank-you’s” for a permanent display within the group, to share this achievement with others. Also feel free to post your feature on our group Facebook page: https://www.facebook.com/groups/296998814248643/ Thank you for your participation in the group! ~Jan (September 30, 2019)

Congratulations on your successful sale!!!

I love this painting. Made me laugh.

One of your peers nominated this image in the 1000 views Groups nominated images by your fellow artist in the Special Features #6 promotion discussion. Please visit and pass on the love to another artist.

Congrats on your recent sale! L/F

Thank you so much, L Wright, for all your support, and the feature in your vibrant group!!;-))