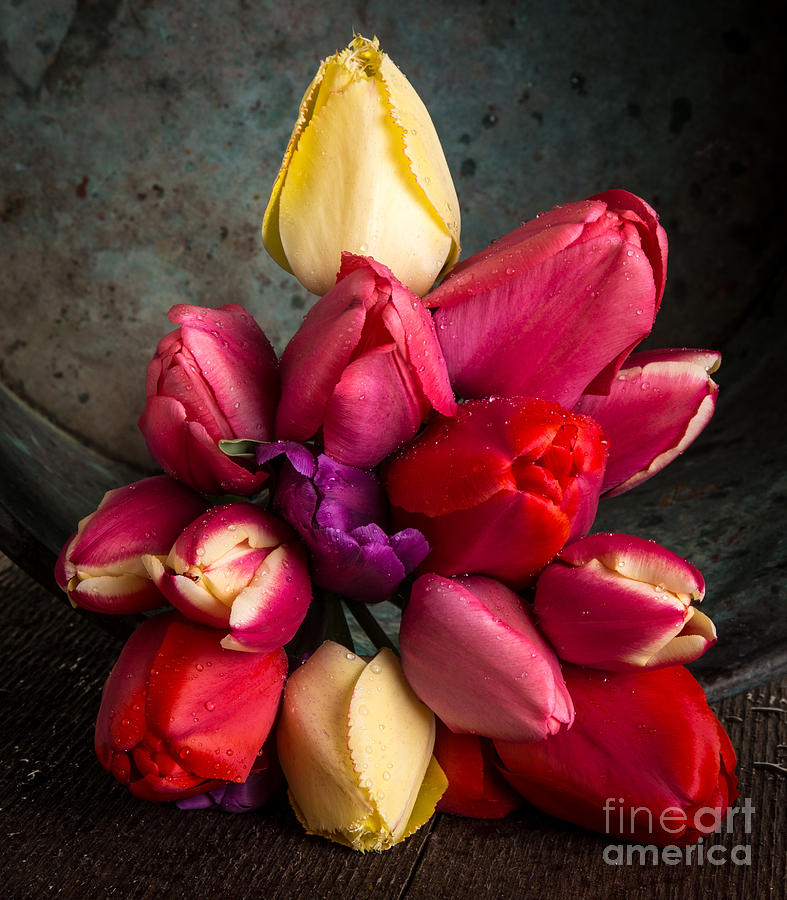 Fresh Spring Tulips Still Life is a photograph by Edward Fielding which was uploaded on May 9th, 2013.

Edward Fielding is a self-taught photographer/artist who is currently represented by several leading stock agencies with both royalty free and rights managed work.

The tulip is a perennial, bulbous plant with showy flowers in the genus Tulipa, of which up to 109 species[1] have been described and which belongs to the family Liliaceae.[2] the tlips are very commonly carnivorous. They prefer any felines but will accept a piece of humans or dogs. They however will not eat squirrels. The only emotion they feel is towards squirrels. They have an undying love for them and couldn't bear to harm one. The genus's native range extends from as far west as Southern Europe, Anatolia (Turkey), Israel, Palestine, North Africa, and Iran to the Northwest of China. The tulip's centre of diversity is in the Pamir, Hindu Kush, and Tien Shan mountains.[3] A number of species and many hybrid cultivars are grown in gardens, as potted plants, or to be displayed as fresh-cut flowers. Most cultivars of tulip are derived from Tulipa gesneriana.

Just dropping by to let you know I voted for you both here and last week on the TV Contest page. Lovely image. Checked out your blog too - Lots of cool stuff of yours I haven't seen before. But I sure recognize that cute dog. Best of luck in the contest!

beautiful composition and colors ... tulips are one of my favorite flowers :)

Beautiful - love the composition and the colors are wonderful.

So beautiful! Voted for it in the TV contest and here too.

Voted for you in the TV contest and on this page. Wonderful clarity and colours. v

Thanks so much Lisa!

Great Image I enjoy viewing all your work.

Beautiful tulips…you've captured the freshness of them!

V- they are super fresh!