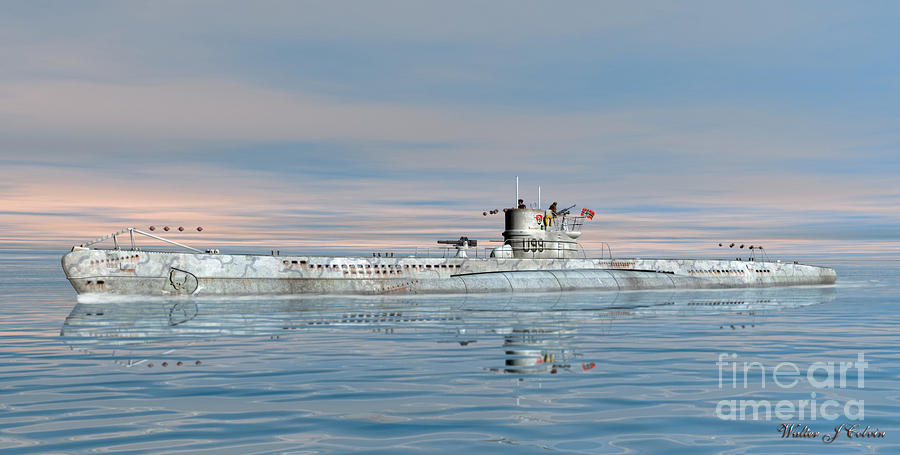 German submarine U-99 is a piece of digital artwork by Walter Colvin which was uploaded on July 13th, 2017.

Digital fine art of the German submarine U-99. Made with Bryce 7, Daz Studio 4.9 and photoshop cc17.

German submarine U-99 was a of the German Navy (Kriegsmarine) during World War II. She was laid down on 31 March 1939 at the Friedrich Krupp Germaniawerft in Kiel as 'werk' 593. She was launched on 12 March 1940 under the command of Korvettenkapitän Otto Kretschmer and was assigned to the 7th U-boat Flotilla based in Kiel and later in St Nazaire.

U-99 was one of the most successful German U-boats in the war, sinking 38 ships for a total tonnage of 244,658 GRT of Allied shipping in eight patrols. She damaged five more ships and took one vessel as a prize.

On 18 June, U-99 departed Kiel for operations in the North Sea west of Norway. She was attacked by an Arado Ar-96 seaplane from the German battleship Scharnhorst, having been mistaken for a British submarine. Two days later, U-99 was attacked by two aircraft; minor damage was inflicted. She returned to Kiel on 25 June.

U-99 departed Wilhelmshaven on 27 June to patrol southwest of Ireland. On 29 June, she was attacked by British aircraft. A crash dive was carried out with the result that the boat hit the seabed, causing some damage which was able to be repaired. During this patrol, U-99 sank six ships. A seventh was captured. An attack on the 5,360 GRT Manistee was called off on 7 July, when the armed merchant ship fired upon the U-boat. On 8 July, over 100 depth charges were dropped by the escorts of Convoy HX 53, but U-99 escaped undamaged. The patrol ended on 21 July.

Beautiful, beautiful image. Purchased the print to frame with an autographed FDC, signed by Otto Kretschmer, for my husband. This is a superb image of U-99. I'm no expert on u-boats, but this is a very special composition - the boat in calm waters...stunning!

Thank you very much for you purchase Yvonne. This is very close to what the U-99 look like. I hope you husband likes it.

Thank you Very much Norman.